Our present prime minister is the first since Pierre Trudeau with the power to baffle many of his fellow Canadians. 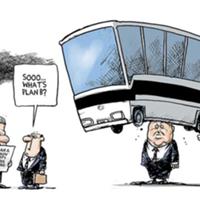 Maybe we didn't like Joe Clark or Brian Mulroney, or Jean Chr&eacutetien or Paul Martin, but we felt we understood them. Trudeau seemed to come out of nowhere, an elegant blank onto which, in the spring of 1968, Canadians projected their dreams. When Trudeaumania receded and we began to know the man by his actions and words, he inspired both respect and alarm, love and hatred.

Those responses came as we realized the guy was smarter than most of us, and more prepared to obey his own logic than to obey us, the voters. But the logic itself was enigmatic; he was a mystery, and as one of his biographers observed, "He haunts us still."

Stephen Joseph Harper, for all his differences from Trudeau, is similarly enigmatic. His supporters love him because he seems to be one of them, a "small-c" conservative clearly set on making this a conservative Canada. His detractors hate him for the same reason, but also because they just can't figure him out.

Paul Wells appears to have figured out Stephen Harper far better than most pundits, and it's only taken him 20 years of following Harper from his days as a Reform MP to his present position as one of the longest-lasting prime ministers in history.

The Marxist education of a Tory prime minister

Wells' book is not a profound psychological inquiry, with the enigmatic prime minister revealing all with a whispered "Rosebud" on the last page. It's a well-written, often funny account of the education of a very intelligent, very capable politician who is aware of his own limitations -- but who may not be able to work within them.

The beginnings of that education lay in Harper's observation of Canadian politics in the 20th century. The Liberals had been the default government; their ideas were taken as givens about the way the world behaved or ought to behave. When right-wing governments did get in, they tended not to last, and their programs were rolled back sooner or later. Harper's own internal logic as a young man didn't like the Liberals, but couldn't find a solution to them.

Wells says that a key insight for Harper was that of the Italian Marxist Antonio Gramsci, as filtered through a right-wing Brit named Peter Brimelow. In his 1986 book The Patriot Game, Brimelow argued that Gramsci's concept of "hegemony" was critical: a ruling class or party had to persuade the other classes or parties that things were the way they just had to be. The Liberals, he said, had effectively persuaded the Progressive Conservatives of that.

According to Wells, "The Patriot Game landed like a bomb among Alberta conservatives precisely because its arguments weren't novel and isolated, but gave expression to something deep-seated, broadly based and cultural. The book functioned as myth, in the way Northrop Frye used that word: not as a tall tale but as a highly charged revelation of a truth that was already present and felt in the culture before the myth gave it words."

Hegemony doesn't vanish overnight, but the old "small-l" liberal hegemony was fading in the 1980s and '90s. Ronald Reagan and Margaret Thatcher, well to the right of their voters, gradually pulled their countries rightward also. (Brian Mulroney, still operating under liberal hegemonic thought, nevertheless had to follow their cue.)

By the end of the century, a new conservative hegemony stood triumphantly on the ruins of both Soviet communism and Rooseveltian liberalism. Voters and citizens had morphed into taxpayers and consumers. The state, rather than withering away in a communist utopia or doing the voters' bidding, was supposed to drown itself in a bathtub. (Instead, it turned into an online Big Brother.)

Harper emerged into this brave new world having studied Liberals far more closely than they had studied Alberta's fringe conservatives. He devised a long-term strategy that would put him in power, and short-term tactics that would keep him there. Wells describes both very well, using a roughly chronological sequence of chapters focused on notable issues and events.

Learning nothing from being wrong

One of the book's strengths is Wells' attention to Harper's adversaries -- not just the individual party leaders, but their senior advisers as well. The Liberals do not come off well. With Gramsci in mind, it's easy to see them all in thrall to a vanishing hegemony, so sure of their own rightness that they learn nothing from being wrong.

So the Liberals, having indulged in the Chr&eacutetien-Martin civil wars, had no response to defeat but to keep changing leaders. The leaders had no response to Conservative attacks but to lie low and be framed as jerks. It remains to be seen whether Justin Trudeau is a break from this dismal tradition.

The New Democrats' Jack Layton comes off relatively well, though he doesn't escape a flaying for allowing Gilles Duceppe to share the spotlight when the coalition was announced. Layton's success in 2011 suggests he too had been playing a long game like Harper, with a tactical lapse in the coalition fiasco.

Similarly, Tom Mulcair gets praise for his ability -- as leader of the "crazy" party -- to remain alarmingly calm and sane while cross-examining Harper and driving the Tories crazy.

A one-eyed man in the kingdom of the blind

Wells makes a good case that Stephen Harper may be the biggest son-of-a-bitch in Canada, but he's also the brightest. Given the breathtaking stupidity that Harper himself is capable of, that's not saying much.

Again and again, Harper has made near-fatal mistakes, as he did with the cutting of the subsidy to political parties that triggered the coalition.

Other mistakes have been more subtle. He might have gained power in 2004 except for the big mouths of some of his far-right candidates, who hadn't learned a thing from their time as Manning Reformers.

The experience taught him that only ironclad message control would keep him in power long enough to establish the new hegemony. But that in turn led to the muzzling of his own MPs, not to mention his scientists and civil servants. So both his backbench and his public service are rife with potential dissent.

The author of his own misfortunes

One of Wells' key points is that Harper is the author of most of his own misfortunes. He's the guy who ignored China until the Keystone XL pause taught him to seek foreign markets for oil; that made energy exports to China his priority #1. And that led to a declaration of war against "environmentalists and other radicals" who might stall the Northern Gateway pipeline to the Pacific.

Perhaps his worst failings might be called human-resources errors. For a man who understands voters, he's a terrible judge of people. He tends to put them in jobs where their behaviour backfires, creating more problems.

Remember Maxime Bernier, leaving classified documents in his girlfriend's apartment? Vic Toews, dividing Canada between his supporters and the child pornographers? Tony Clement, dispenser of tax largesse in the form of gazebos in his own riding? Bev Oda of the 16-buck orange juice? Peter Kent and Leona Aglukkaq? Not to mention a host of disposable gofers in the prime minister's office who soon burned out or otherwise failed.

This, after all, is the man who made Dean Del Mastro his parliamentary secretary, a man now turfed from the Conservative caucus after charges of violating election spending. And this is the man who swore he would reform the Senate, before appointing dozens of mediocrities including Patrick Brazeau, Mike Duffy and Pamela Wallin.

The worst choice of all?

Of all those choices, Nigel Wright may have been the dumbest: a man at least as smart as Harper, with a successful money-making life in the real world, who had to be rapidly transformed from Honourable Mr. Fix-It to Evil Intriguer Behind the Prime Ministerial Back. By taking the job in the first place, Wright showed he's not quite as bright as advertised. But he may be bright enough to bring down his master.

Wells brings us up very close to the present, and recent events in the Senate scandal only confirm his argument that Stephen Harper may well be a "self-unmade man," able to outwit everyone in the room including himself. As the leader of a party that believes in personal responsibility, he has ducked responsibility for his own countless mistakes.

Even if he falls, whether at the hands of Mike Duffy or some other unfortunate hire, will his new hegemony survive? Recent kind words for Nigel Wright from Peter MacKay and Jason Kenney sound like discreet bids for succession.

But as Wells points out, Harper has learned at least one thing from his own behaviour: he was a disloyal lieutenant to Preston Manning, undercutting or deserting him whenever convenient, and eventually hijacking both Reform and the Progressive Conservatives. Paul Martin's disloyalty may have ruined the Liberals, but disloyalty got Harper where he is, and he has taken pains since then to tolerate no restless Paul Martins in his own cabinet. His cabinet stooges can hope only for post-Harper corporate directorships, not political power.

So Harper's hegemony will likely die with his administration, and the opportunists he recruited will not preserve it.

But we're not going back to some idyllic Trudeaumaniac summer of '68. When Stephen Harper is finally, mercifully gone, we will have to build a new hegemony, a realistic new way of thinking about ourselves and our world, to get us and our children (and the Conservatives' children) through what is likely to be the worst century in human history.

It will be hard, and Harper will haunt us through it all.