[Editor's note: earlier in the century, veteran Tyee contributor Thom Wong took it upon himself, using a sports-based bracket system, to determine the single greatest Canadian song of all-time. The response was extraordinary. Catastrophically unprepared Tyee operators found themselves overwhelmed by calls while Wong himself was invited (futilely, as it happens) to defend his somewhat complicated mission on Bruce Allen's CKNW radio show. Meanwhile, one visitor to the message board remarked: "This is the most useless list ever completed." That person was wrong. Wong's list was never completed. Instead, the man took a well-deserved nine-month time out, giving space for the sing-song voices in his head to continue the debate in peace. 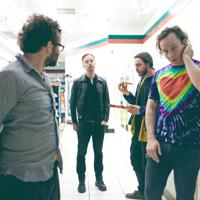 Most of the internet was obsessed last week by the video for Avril Lavigne's "Hello Kitty." My verdict? It's not really that bad. It's not any good, either. It basically is so irrelevant it might as well not exist, which is about as nice a thing as you can say for Lavigne's current career. Since you're reading The Tyee I can assume you're no fan of our Canadian pop princess's output to date, but remember that there was a time she mattered so much people called her-- wrongly, idiotically -- the anti-Britney.

The best ever. The worst ever. The 33 things you need to see RIGHT NOW. A man walked into store -- what happens next will BLOW YOUR MIND. In the little over a year it's taken me to determine the greatest Canadian song ever recorded by a Canadian ever, something truly terrible has happened to the internet. Or maybe, we simply got the internet we deserved. In December, Luke O'Neil wrote on the Esquire blog that "[r]eaders are gullible, the media is feckless, garbage is circulated around, and everyone goes to bed happy and fed." Looking at my feed on Facebook, it's hard to disagree.

I'm a little disappointed that I let [writer] Sean [Minogue] put Maestro in for the one hip hop entry into the sweet 16, when "Northern Touch" by the Rascalz, featuring an on-fire Kardinal Offishal, Thrust, Checkmate, and the not-yet-annoying Choclair, was just sitting there, waiting for its moment in the sun. Sorry, Rascalz.

As it is, side 1, track 1 of Arcade Fire's debut verbally assassinates the Maestro, who gets an honorary mention for making me dance like an idiot in grade 8.

4. "Nautical Disaster" by The Tragically Hip vs. 1. "Needle and the Damage Done" by Neil Young

In a completely unscientific study I asked some Canadian teenagers if they knew who The Tragically Hip were, and was blanked five straight times. Three of them knew Our Lady Peace, and one, inexplicably, The Tea Party. During the time the Hip were actually active we would have blamed this anonymity on lack of radio play, but kids don't even know what a radio is anymore. Unfortunately, there's no one to blame but the fickleness of time, and maybe the lack of vociferous Hip fans. As good as the Hip were, they weren't really known for inspiring fanaticism.

And the Hip were good. If you don't like the Hip, "Nautical Disaster" will be Exhibit A in your case against them: arrhythmic, unrhymed lyrics; rambling, almost aimless guitar notes; Gord Downey's voice. But... but if you like the Hip, "Nautical Disaster" is their greatest triumph: lyrics that are pure poetry; those pre-The National guitar licks; Gord Downey's voice; the story of a doomed battleship meeting its doom in uncaring waters. I like the Hip a lot.

But even on their best day, they were never Neil Young good.

6. "Sweet Jane" by Cowboy Junkies vs. 2. "Wheat Kings/Scared" by The Tragically Hip

They were, however, better than Cowboy Junkies by almost every metric. "Sweet Jane" is a goddamn classic, but it's a cover of a song that was already a classic. It should be remembered as the great version it is, but not as better than either "Wheat Kings" or "Scared," and, since I paired them, definitely not better than both.

Well, this is odd. There's obviously no way that Feist's beautiful, perfectly formed ode to life in the country is going to beat one of Leonard Cohen's most iconic songs. This is David and Goliath time, only this time, as one might expect, Goliath simply sits on David until he stops moving.

Feist is one of the few Canadian artists to gather worldwide attention lately, and seems the most likely, along with Arcade Fire and Drake, to continue to do so, if she so chooses. Based on her relatively laconic album release schedule, I'm not so sure she wants to.

I can't decide right now... they both go through to the next round.

I had the distinct privilege of watching John Mann perform solo in a friend's house in Victoria, although the actual economic situation that made that possible was probably not the happiest. During the hour or so concert, Mann shared the story of his battle with cancer with the good humour and grace of someone who realizes they've lived a blessed life.

Chances are some of your best shared moments happened to this Spirit of the West song, and everything I've said previously to get it to this point still stands. It's just a great sing-a-long crowd-pleaser of an anthem. It rocks.

"The Weight" doesn't rock. It doesn't even simmer. It rolls along with the steady reliability of a well-oiled bicycle that you know will deliver you safe to your door, even though you were falling-down drunk not a moment before. The central metaphor that is the basis of its incredibly literal title is, on close inspection, a little ham-fisted. It's a great song that doesn't really want to be great, and its best version may have been by Aretha Franklin.

Spirit of the West - "Home for a Rest"

Like it or not, Canada, but Bryan Adams matters. For starters, people around the world know he is Canadian, which, while some people might protest, you have to admit is pretty impressive. William Shatner managed to go decades without anyone knowing, and was only outed when the secretly Canadian thing became a meme. (And still a classic. "Graham Greene. Green card. Coincidence?" Genuine LOL.)

It's hard for Canadians to think that Bryan Adams is important, because he seems embarrassing and he tends to write the heartfelt, simple songs of which we're trained to be wary. We also have the British tendency to mistrust anyone who becomes too successful, and Bryan Adams is never-work-again successful (and apparently an accomplished photographer to boot). It's also fairly arguable that he hasn't written another song anywhere near as great as "Summer of '69." And it is great -- few songs are as successful at evoking a time that never, ever existed, and that Adams himself never experienced. He's a one-trick magician but damn is that trick ever good.

Thirty years from now we might not ever hear "No Cars Go" on whatever passes for the radio at that point, but you're all but guaranteed to hear "Summer of '69". For that reason alone it should win.

But not this time.

Next time -- the actual winner!

Spirit of the West - "Home for a Rest"