The one official recording made by the Vancouver rock band UJ3RK5 -- pronounced You Jerk (the 5 is silent) -- was a four-song EP produced in 1979. The cover photograph was taken by Jeff Wall, a band member who was becoming known for his large-format photography and had the equipment to take the photo. All eight of us in UJ3RK5 gathered in a Simon Fraser University studio at 21 Water Street in Gastown, where we had been jamming for a year or so, and hung around while Jeff orchestrated the scene, arranged the lights, positioned the band members and took Polaroid test shots. The whole thing took only an hour or two. 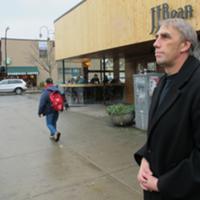 UJ3RK5 formed in 1978 when a group of friends started to meet at the SFU studio to hang out and jam. At the core of the band was a duo called The Gentlemen Two: Rodney Graham, a guitarist/composer and an artist associated with the Vancouver School of photo-conceptualism, and Frank Johnson, a vocalist/lyricist/synthesizer whose punk rock name was Frankie Ramirez.

Frank made up the band name and offered different explanations depending on who was asking. At times he claimed the "RK" in the name stood for Robert Kleyn, the artist and architect. I believe it was just an oddball punk rock way of spelling "You jerk!" Ian Wallace, another photo-conceptual artist, played bass and became the calm centre of the band. Jeff Wall and I wrote and sang songs and alternated on the electric organ. Kitty Byrne, Rodney's girlfriend at the time, learned to play the drums really well, really quickly. Danice Macleod, a classically trained musician, played the electric violin. From time to time UJ3RK5 included several other members, including author William Gibson, who was just beginning to make his mark in the world of cyberspace. A cassette recording of a great song called "Bruce Lee's Leathers" that he wrote and sang with us exists somewhere: a highly sought-after curio in the world of musical-literary ephemera.

Most of us had been friends since meeting at the University of British Columbia during the late '60s and early '70s. Ian, Jeff and I with our families had shared a flat in London in 1970-71. We all had a strong passion for music, and the advent of punk culture provided an atmosphere of communal excitement. There were countless examples of do-it-yourself bands outside traditional industry models. As well as the music, the remarkable graphic designs of so many record covers of the time and the close links of many bands to art and art schools were exciting and made forming a band feel natural and inevitable to us.

In its early days, UJ3RK5 was as much a social club as a band. We would jam for a while, then go out for drinks, dreaming up pranks and escapades. Jeff Wall devised a UJ3RK5 manifesto, typed on eighteen recipe cards: "This formula is not true/UJ3=RK5," etc. At some point, after weeks of enjoyable sessions of turning jams into songs, we realized we were ready to go public. What we all lacked was the impetus to get a little more disciplined, organized and stage-ready. The last member to join, Colin Griffiths (punk name Frank Crass), remedied all that. He also played a guitar that lit up from the inside and toughened up our sound. Colin was a few years younger than the rest of us and knew everybody in the local punk rock/new wave community. He also knew how to fix things that broke.

I was the record collector of the group. We would hang out at my place in a cluster of duplexes on West 4th Avenue that we called UJ3RK5 Hollow, where Rodney and Kitty lived as well, and listen to the latest punk/new-wave singles and LPs from the UK and New York, and we discovered great new bands coming out every week. The Buzzcocks, Talking Heads, The Raincoats and The Fall were particular favourites. We kept up with the very active local music too, but our songs owed little to any of them. Our band was most often compared to Devo from Akron, Ohio, but the essence of the UJ3RK5 sound came directly from the musical minds of The Gentlemen Two: Frank's yappy, off-kilter vocal stylings and Rodney's complex, swirling arrangements and rocking tunefulness.

Frank Johnson (Frankie Ramirez) was our main front man. His stage moves were unpredictable and a little bit scary, much as he was in real life, but he sure could whip out a lot of dazzling, unhinged songs. His lyrical fragments pop up in my brain at idle moments: "Our Father who art in heaven / Resides in his parish in Sunny Devon / Move the baboon to David Niven / If you can't… The Anglican!" Even the songs that Jeff and I wrote and sang conformed to the UJ3RK5 methodology: a snappy blend of the meticulous and the unrestrained.

Our first public appearance was at the Helen Pitt Gallery on Pender Street in Vancouver, in March 1979, in a lineup with E, Exxotone, The Generators and The Shades. Joey Shithead of DOA, who had never heard us play, volunteered to be our roadie in exchange for a case of beer. Jeff Wall wore a fake tracheotomy bandage on his neck. Danice and Colin designed a poster for the event, in the form of an eye chart. The audience was heavy with art school kids and students and devotees of the artists in the band. We got a friendly and very respectful reception. There was some punk rock violence later in the evening with a girl and boy from another band, but we were long gone by then. After Joey helped us load our gear we piled into Ian's Jaguar and went for cocktails at a West Side bistro to talk about our band's bright future. All in all, a great evening.

We played perhaps a dozen gigs over the next several months and generally received friendly support. Nobody threw anything or gobbed on us. Most of us were over 30, usually a few years older than our audiences and all the other bands on the scene, but despite our age and the fact we had real jobs, it was evident we could still rock out. Music made by artists is often greeted with skepticism, seen as a contrived gesture rather than something natural from the heart. The Vancouver Free Press noted that "Ramirez's semi-psychotic gesticulations… draw away from more static stances adopted by some of the other Jerks." I'm sure there were some dubious critics but the kids thought we were all right.

Our catalogue of recordings is small but potent. "UJ3RK5 Work for Police" and "Naum Gabo" appear on the Vancouver Complication album, a compilation of 15 of the hottest Vancouver area bands of the late 1970s, including DOA, The Dishrags and The Pointed Sticks. The album was recorded in a basement in Burnaby and captures a great moment in local musical independence and enthusiasm.

In 1979 our one record was produced at Little Mountain Sound, one of the best studios in the city. Two of the songs were written by Frank, one by Jeff, one by me. The photo on the cover is the one Jeff Wall took at the SFU studio; it remains his most affordable edition. The record was released as a 12" 45 RPM EP by the Vancouver label Quintessence. A year later it was picked up by the major label Polygram, who confusingly turned it into a 33 RPM mini-album. The company expected us to embark on a career of touring and recording, perhaps to become the Devo of Canada. In their press release we were described as "progressive in the same way Martha and the Muffins are progressive." That's when UJ3RK5 dissolved.

In 1994, somebody spray-painted the word Jerk on the wall of the tennis club across from my house. I felt honoured and happy to be remembered and rushed out and photographed it before it was painted over. A band from Alabama called Man… Or Astroman discovered our record in a budget bin in 1995 and were so impressed that they recorded a version of our song "Eisenhower and the Hippies." Record companies and art galleries continue to show interest in releasing our material.

Jeff Wall is one of the most prominent artists in the world today. Rodney Graham exhibits his artwork internationally, and his band has played at the Louvre. Ian Wallace recently had a major retrospective at the Vancouver Art Gallery. Danice Macleod formed the band Bamff. Kitty Byrne became a gallery curator. Colin Griffiths (Frank Crass) does installation and production for art galleries all over the world. Frank Johnson (Frankie Ramirez) played in bands and worked in radio. And I continued to work with the CBC, hosting Nightlines, RadioSonic and Pearls of Wisdom. Ian Wallace, Frank Johnson and Colin Griffiths still get together to jam. A UJ3RK5 reunion is unlikely, but most of us are still friends.