When Sylvia Grace Borda set out to update the romanticized image of agriculture in the art world, she did so in a thoroughly modern way: Google Street View. 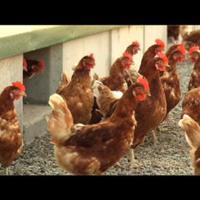 Clicking through a tour of Surrey's Medomist Farms Ltd. on her laptop, she stops suddenly, turns 180-degrees and says, "That's it. Look at those long lines. That's the tableau I love."

On the virtual farm she's at one end of a large barn, looking across a sea of white turkeys. A dark figure stands in the distance, farmer Kevin Bose, mid-step as he lifts an automatic waterer from the ground.

The secret is, this was staged. Borda convinced Bose to hold the pose while photographer John M. Lynch, a contractor for Google Business Street View, took the requisite number of frames for the 3D portrait.

Borda's Farm Tableau series captures farmers in routine activities. But instead of a typical staged photograph, Borda has created compositions viewers can explore in an interactive landscape.

'This one's for the Farmer'

As artist-in-residence at the Surrey Art Gallery's TechLab, Borda spent six months in the field shooting film and recording videos of farms in Surrey and the Fraser Valley. The tableau series is part of a larger exhibition currently showing at the gallery entitled This one's for the Farmer.

The title "is kind of a vindication in some ways," Borda says. It's recognition for the wide scope of activities that exist in farming, and also an attempt to shed light on the labour and length of time involved in food production.

"I really wanted to go off the road and onto farms," Borda says. "We have a very poor notion of what happens behind the gate."

This one's for the Farmer -- at the gallery until Dec. 18 -- includes other components as well. For Aerial Fields, a video component that opens Nov. 18 at the Surrey Urban Screen, Borda used a remote-controlled drone to record the city's agricultural land from above.

In Stereoviews: Two Points of Perspective if not Three, Borda uses a 19th-century photographic technique that allows two-dimensional images to have depth when seen through a stereoviewer. To the farmers she worked with, says Borda, the resulting three-dimensional images of cabbages, cauliflower and haystacks were surprisingly more real than the real thing.

To capture an accurate portrait of agriculture, Borda shadowed farmers in their daily routines. She followed a gruelling farming schedule, waking up at 5 a.m. and not getting to sleep until 10 at night.

"I just told my friends I was away, out of town," she says, laughing.

What she saw at the farms was that "it's really about the core family at the root of the operation." Although there is the help of modern machinery, like the Pixar-esque two-story blueberry picker, much work is still done by hand. "These are fast-paced, working enterprises," says Borda. "There is no downtime for farmers."

The idea for This one's for the Farmer was partly inspired by a previous exhibition Borda did for the Surrey Art Gallery in which she mapped and photographed every bus stop in Surrey.

That was in 2004, before Google Street View and before Surrey really had a city centre. At the time, she saw the bus stop locations fall into three distinct environs: residential, industrial and agricultural. She was intrigued by the amount of agriculture still happening in Surrey, and wanted to examine it more closely.


View Larger Map
Take a tour of Medomist Farms. (Can you find the corn maze?)

Borda describes Surrey as an amalgam of formerly agrarian towns and villages where agriculture is still an important economic driver, but where the farms themselves are fragmented by industrial and residential development.

"Farming fails to be part of the way to define Surrey," says Borda. "Surrey ignores it."

Borda feels contemporary art has also largely ignored agriculture. She speaks of two types of farm imagery that dominate public consciousness today: the gauzy pastoral scenes of 19th-century painters, and the raw scenes of the modern documentarian -- films like Food Inc., or photo essays like "Factory Food From Above" which show the shocking scale of industrial agriculture. "Images that come with a message attached," says Borda.

While these 10,000-foot views make an impact, "you see [the farms] as almost running remotely," observes Borda. "For me, this was really about making farming intimate."