Up until two years ago, Tommy Taylor didn't give much thought to activism or demonstrations. He was a model citizen, renting a basement suite with his girlfriend and pursuing a career in the arts. 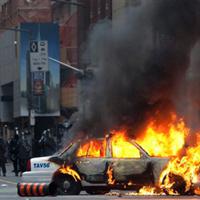 G20 Protests: Is this What Harper Wanted?

Then he found himself seized in the largest mass arrest in Canadian history. It was a taste of oppression he would never forget.

"Afterwards, people would say 'just be happy you don't live in North Korea or Syria," says Taylor. "Well, that's not the bar at which I measure my own country. That's not good enough. We have to do our best.

A story of injustice

Minutes before curtain on the opening night of "You Should Have Stayed Home: A G20 Romp" (playing at the Firehall Arts Centre in Vancouver) Taylor, sitting amongst the audience wearing a t-shirt emblazoned with the word "freedom," describes this turning point with passion.

The show is an adaptation of an exhaustive Facebook note he penned after arriving home from his imprisonment, "How I Got Arrested and Abused by the G20 in Toronto." Written over the course of two days, it quickly went viral and Taylor realized he needed to elevate awareness about what happened beyond the alarming photos of anarchists torching police cars and smashing windows.

The set is sparse; merely a cage with an open front, a desk with a jug of water and a laptop, and a lone port-a-potty with the door stripped off. Quippy phrases are projected on a white screen, evidence of Taylor's abiding sense of humour.

Instantly likeable, it's hard to believe he could ever be in trouble with the law. As he recounts how he went from curious bystander to active participant, the audience leans forward in their seats, enthralled.

Taylor begins at Queens Park, the Free Speech Zone on June 26, 2010. He was charmed by grannies marching in support of AIDS orphans and the sound of drum circles. Excited by the energy, he convinced his girlfriend and friend Ben to join him back at the park. He made a sign that read: apathy kills. They spent the evening enjoying the vibe, at times giggling at the earnest protest songs, but singing along to "Give Peace a Chance."

But the humour fades when he talks about the menacing turn around 10 p.m., near the Keg restaurant, when riot police moved in. Media were instructed to leave the area. Protestors sat on the ground to show their compliance. One by one, officers plucked people from the ground and deposited them into paddy wagons. It was a chilling round-up of more than a thousand people in a sweeping measure of intimidation.

Trying to quell the crazy

After a surreal ride in a prison bus, Taylor was led into a mammoth warehouse filled with cages. At the Eastern Avenue Detention Centre (formerly the Toronto Film Studio), hundreds of people were crammed into 10 by 20 foot coops, many pleading for help and water. Some had been beaten, their clothing torn. Many were barefoot. Taylor is a skilled storyteller and the audience begins shifting uncomfortably in their seats.

At the midway point of the show, a cluster of volunteers join him onstage. The effect is bizarre and unsettling, watching strangers inhabit the oppressive space. It's easy to imagine the stench from the port-a-potty, the chill from the concrete floors, and the creeping hopelessness. In a moment of levity, a condom is blown up and they play "Condom Ball" to quell the crazy. Watching them batting the inflated prophylactic around has a comedic and soothing effect.

After a near riot, he and his cage mates are given a styrofoam Dixie cup with enough water for two or three mouthfuls. The only food provided is a bun, slathered with soya margarine and a slice of processed cheese.

After 15 hours standing in a cage with little water, Taylor describes passing out from exhaustion and dehydration. He received no medical attention, just a cup of watered down Tang.

He was released without charge after 23 hours, on the condition he would never participate in another demonstration. He was so diminished that when a gathering of people outside the fence offered to help, he couldn't engage with them. Instead, he trudged through the rain to a phone booth and called his girlfriend.

You Should Have Stayed Home is riveting and alarming, with moments of buoyancy. Taylor has an everyman quality and lack of pretense that makes his performance immensely relatable. This is a moving account of one man's resilience and determination to illuminate a troubling weekend in Canadian history.