It takes a special kind of arrogance to release a debut album as ambitious as A$AP Rocky's LongLiveA$AP. 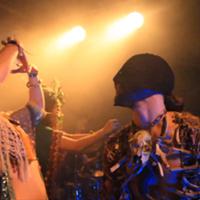 End of the World Music

Over the course of the record's 12 songs -- or 17 including the various bonus tracks -- the upstart New Yorker raps alongside a bevy of superstar MCs, singers, and producers, some of whom are more famous and well-established than he is. There's Drake, Santigold, Kendrick Lamar, Danger Mouse, Skrillex, Florence Welch and Pharrell among many others.

Listening to the album for the first time, it's easy to be distracted by these cameos. The most conspicuous of the bunch is Skrillex's appearance on "Wild for the Night," which bizarrely places Rocky's rhymes against a backdrop of skanking reggae organ, robot voices, and speaker-frying synth blasts that sound a bit like a nuclear reactor in mid-meltdown.

And then there's Drake's tongue-twisting contribution to the sexed up "Fuckin' Problems," a track that also features a verse from Kendrick Lamar (who awesomely borrows lines from his own song, "Money Trees"). Lamar additionally shows up on the epic "1 Train," which features a dizzying string of verses from Joey Bada$$, Yelawolf, Danny Brown, Action Bronson and Big K.R.I.T.; if you're anything like me, you'll need to keep checking the credits in order to keep track of them all.

But here's what makes LongLiveA$AP such a career-making debut -- out of anyone who shows up on the album, Rocky himself is most compelling. The cameo-free "Goldie" sets a druggy atmosphere with its woozily pitch-dropped vocals, while Rocky receives a production co-credit (under the pseudonym Lord Flacko) for the atmospheric turns on "Long Live A$AP" and "Suddenly."

Perhaps most memorable of all is "PMW (All I Really Need)," which boasts a foul-mouthed chorus that's catchy enough to be a nursery rhyme but obscene enough to land me in some serious trouble if I ever absent-mindedly sing along to it in a public place.

Between March and May of this year, A$AP Rocky will support the album by touring North America as Rihanna's opening act. This jaunt includes an April 1 stop in Vancouver. Let's hope for RiRi's sake that she doesn't get outshone by the rookie; if she does, she wouldn't be the first.