Back in May, Montreal-based duo Handsome Furs announced that following a string of acclaimed LPs, the six-year musical partnership between married couple Daniel Boeckner and Alexei Perry had come to an end. It was no doubt especially troubling for fans, considering Boeckner's other ensemble, celebrated indie rock quintet Wolf Parade, had begun an indefinite hiatus less than a year prior. 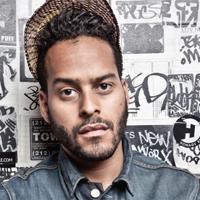 Twin Shadow Is Cooler than You

Thankfully, the Vancouver Island-born songwriter's devoted followers only endured about a week’s worth of panic before he announced Divine Fits. An indie supergroup of sorts, the unit also includes equally acclaimed indie songsmith Britt Daniel of the consistently excellent Spoon, and drummer Sam Brown of the Columbus, OH-bred garage punks New Bomb Turks (if, by chance, that act doesn't perk your ears any, the percussionist has also played in producer RJD2's live band).

Interestingly enough, the trio managed to keep their existence under wraps for over a year, and by the time they properly announced themselves, they already had an LP to hock. The group’s first full-length, A Thing Called Divine Fits, hits online and brick-and-mortar retailers Aug. 28 through Merge Records.

So what does a band featuring the distinct styles of both Boeckner and Daniel sound like? Well, simply put, it's a little of both worlds. The steady electro pop pulse of album opener "My Love Is Real" plays like it could have come out of the same songwriting session as the Handsome Furs final effort, Sound Kapital, with chintzy Casiotone keyboards wrapping themselves around Boeckner's wavering baritone. "My love is real," he stammers, "until it stops."

Lyrically, the track sets up recurring themes of heartache. On the dark, conga beat-driven "For Your Heart," for instance, the singer's voice cracks with emotion as he sings, "You better tell me why you keep me in the dark, searching for your heart."

The Daniel-sung numbers, meanwhile, have a bit more bounce to them. Sounding like the successor to Spoon's 2007 single "Don't You Evah" -- itself a cover of the Natural History’s "Don't You Ever" -- "Would That Not Be Nice" wriggles into your consciousness via a laidback, yet dominating bass line, supple maraca rhythms, and oscillating keyboards. The number also highlights Daniel’s affinity for subtle studio trickery, with touches of distortion, slap-back, and other assorted effects salting his scratchy, soulful performance.

"Like Ice Cream" is a bizarrely dessert-themed slow-rolling pop-rock tune full of falsetto cries and ethereal, melodious panting, but despite how potentially corny those cocoa-butter-soaked lyrics get, it’s one of the sweetest numbers on the set.

"Baby Get Worse" is one of the few tracks to noticeably feature both vocalists. Despite the pair trading off on dewily-delivered verses and choruses, the synth-heavy arrangement conjures up New Traditionalists-era Devo, though it subs speedy motorik rhythms for a no less menacing, tom-tom-imbued stomp.

Divine Fits - Would That Not Be Nice"

Despite knocking off a number of quality tunes, Daniel also delivers the album's only obvious clunker, a paint-by-numbers, lighter-waving cover of the Boys Next Door's "Shivers." The song starts earnestly enough with the depressing admission, "I've been contemplating suicide / but it really doesn't suit my style," but Nick Cave's lyrical directness is trumped by Divine Fits' all-too-obvious arena ballad interpretation. Later, Daniel deigns to keep his wrists sealed and live his life in poker-faced boredom. Judging by the rest of A Thing Called Divine Fits, including the pleasantly ambient closer "Neapolitans," it's a sentiment that doesn't apply to his own music just yet.