I've lived in three cities when they were hosting the Olympics. I was two months old in Montreal, fresh off a plane from Scotland when my mom, then eight months pregnant with me, arrived in Canada. The Olympics that couldn't possibly run a deficit also gave the world a 15-year-old René Simard warbling in true Love Boat fashion, "Bienvenue à Montréal." 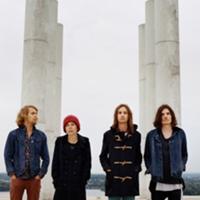 In 2010 I joined with the rest of Vancouver in at first condemning the Olympics and then cheering myself hoarse during the gold medal hockey game, all to the iconic tune "I Believe" by the timeless Nikki Yanofsky. Although the world could be forgiven for thinking the official song was actually kd lang's cover of "Hallelujah."

Now I'm in London where public opinion is as fickle as the weather, but the people here are definitely in agreement on two things. One, the London Olympic logo is an embarrassing disaster. And two, "Survival," the official song by Muse, is at least weird, and probably terrible.

Why are Olympic songs so bad? One could argue that in attempting to write a song that will appeal to billions of people all around the world, the chosen performer is doomed to failure. The premise alone is madness -- not since leaving the trees for the ground has the world in its entirety really agreed on anything.

There's been a lot of criticism over choosing Muse in the first place, a fairly popular band that's never really been accused of greatness (or restraint). The country has no shortage of great, iconic bands and musicians, but I'm not sure if simple talent is the answer. Athens 2004 released Bjork in all her confusing ball gown glory, and was rewarded with a three-and-a-half minute ode to why our sweat is salty (hint: because we came from the ocean).

If only England had recently given the world an almost universally-acclaimed performer, a real powerhouse vocalist who sings straight from the heart but also maintains a healthy amount of sass; an artist so generally talented that even people who don't like her admit she's not that bad, and probably sing her songs in the shower when no one is looking. Oh wait, it did.

Satellites - "In a City"

Of course, if we're just blue-skying here, the Olympics could also go off script and try and bring attention to an underdog musician, a musical version of the Miracle on Ice. Should they have decided to do that here, my vote would have been with Satellites, the performance name for U.K. DJ and producer, Johnny Vic.

I want to describe Satellites debut album, 01, as modern folk, but that makes it sound awful and unbearable. And there's a touch of the singer-songwriter in there too, but if the words singer-songwriter get you excited about music, you're a more optimistic person than I am. So I'll say his songs have elements of folk crafted around contemporary drums with help from computers.

The entire album is like a warm cup of soup when you want it the most, but the Olympic song, the one where people come out on roller skates dressed as manta rays, is the opening track, "In a City." You have the slow build in the beginning over a simple piano line, until churning drums and guitars bring the crowd to its feet, and then it's capped by "Baker Street"-esque horns for the fist-pumping finale. I can see the montage already.