Popular music doesn't tend to be difficult music, and it's rare to find genre-defying soundscapes that challenge your mind as well as your ears and feet. We live, after all, in a world where a massive, Grammy-winning band like Arcade Fire can remain completely unknown throughout the greater United States; a "difficult" band that performed at a fashion awards show. 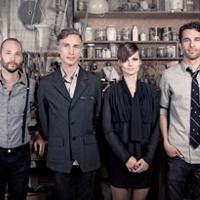 Rococode and the Onward March of Vancouver's Pop Kids

Difficult music tends to be tagged with the additional moniker "needlessly," and we've been conditioned now, through movie trailers and advertising, to think of music as something that accompanies other activities, whether beer drinking, snowboarding, or applying deodorant. It's a rare moment, at least for me, where music is the sole point of focus, where listening to music is the activity.

First up is a song from October of last year: Julia Holter's "Marienbad," off her first full-length album, Tragedy, the only album I know of that's based on a Greek tragedy. Holter, a graduate of CalArts, makes what I would call very difficult music, the kind that goes through more than one pass of pitch distortion, digital muckery, and has nothing even resembling a verse or a chorus. What you get instead is a song full of feeling, foreign, often indecipherable sounds, and the kind of vocals that music critics like to call Baroque (which essentially means that a singer leaves her mouth open as she finishes a note).

"Marienbad" unfolds over several segments, separated by the fading in and out of different musical parts of strings, drums, layered vocals, and, I'm guessing, a pipe being hit with a spoon and voices manipulated to sound like horns. Holter's voice is a lovely instrument, and while her words are not always easy to discern, you get the idea that's the point. "Marienbad" forms an impression of a song on you, and, by the time you get a sense of its structure, it fades out, leaving you wanting more.