There's something about M83's music that'll make you feel like a teenage girl. Though we're talking about a band from France, a country whose cultural producers have a proud history of picking fruit that's not fully ripe, I don't mean in the tactile sense, creep. M83 just have this way of making you curl up in your bed and ponder all sorts of stupidly dreamy and romantic thoughts until the iTunes play count quickly hits the triple digits. They might even make you call up a friend to gab about that boy you have a crush on. 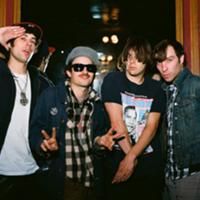 Get Drunk, Get Stoned, Shake Your Tambourine

M83 are essentially Anthony Gonzalez plus some other guys -- most notably, a drummer with an unpronounceable first name, Loïc. (I dare you to try and figure out the keyboard shortcut for an i with an umlaut). Because they're French, predictably, their sound is retro and runway-friendly, their videos are especially slick and their design sense is impeccable. French electronic musicians just have an innate gift for being the complete package -- it's a through line M83 share with countrymen Air, Daft Punk and any number of artists on the Ed Banger label.

Whatever you want to call their sound -- dream pop, synth pop, shoe gaze or electronica -- M83 are wonderfully cinematic and intelligent, but fun and with just the right amount of fromage (did I mention they're French?). The vocals are soft, the synths are loud and the build-ups are always momentous. If John Hughes were still making movies, it's not hard to imagine an M83 song playing as the destitute nerd triumphantly leaves the prom with the misunderstood rich bitch.

Their latest album Hurry Up, We're Dreaming is the band's sixth and it's a mix of synth-driven songs, ambient tracks and a few rockier numbers that sound eerily similar to Peter Gabriel. The single, "Midnight City," which was released for free this summer, is an especially euphoric anthem that might actually get the shoe-gazers to look up and pump their fists a little.

Despite being a little long -- it's a double LP -- Hurry Up, We're Dreaming is an interesting and welcome addition to M83's oeuvre and a worthy follow up to their 2008 classic Saturdays=Youth. However, if you're a fan, 22-songs probably aren't enough to tide you over until the next time you see them perform, as they're one of the better live acts around. One thing is clear, M83 are getting better with age, much like... like a... shit, it's just on the tip of my tongue. It smells like alcohol. You keep in the cellar. Oh, I know: like my Grandpa!