It's a terrible cliché but also unerringly true -- go into any art gallery, anywhere in the world, and someone there will remark that a child, possibly his or hers, could produce a painting equal to those on the wall. In the music world this charge tends to be leveled at electronic musicians, particularly those who dabble in the noisier side of the spectrum. (For my dad it's hip hop -- I desperately want to hear him rap.) 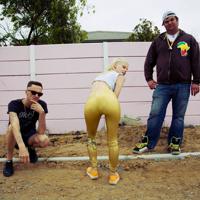 The Zef Side Rises Again

Montreal musician Grimes, née Claire Boucher, makes no pretensions to musical ability. A recent article claims that the samples you hear on her latest album, Halfaxa, are recordings of her attempts to play various instruments. Grimes may not have mastered her craft just yet, but any growing pains still left for her are not evident in the songs. Instead, you hear an artist unafraid of limitations.

Halfaxa varies between shorter, twitchy experiments and longer, more melodic meditations. There are few discernible lyrics, only Boucher's hauntingly lovely voice singing in what sounds like Latin. Even when you can make out actual English words, they come through like another instrument, just one more sample to layer with the drums, keys, and, at times, ukulele. The sliding, wet beat of "Dragvandil," an under two-minute piece that sounds like Boucher warming her vocal cords, leads into "Devon," which starts with a Kokomo-sounding rhythm over which she chants like a Renaissance diva.

Boucher's voice has a similar quality to Jónsi of Sigur Ros, or Antony of Antony and the Johnsons, and it plays a comparable role in her songs. While she doesn't yet have the confidence to let her voice really prowl, you can hear the direction that might lead on "Favriel," a two-stepping, spacey number in which she layers her voice into a brass section of "bumpahs" and "ooooos." For a minute and 49 seconds on the presumably unpronounceable "∆∆∆∆rasik∆∆∆∆" she lets her voice take centre stage, toning down the sonic complexity of the album's other tracks. The result had me wishing for an acoustic album.

Apparently Boucher uses Garageband to record her songs, meaning that, yes, technically anyone with a Mac can make songs like these. But I doubt anyone would sound like her.

You can download Grime's Halfaxa for free from Arbutus Records.