Visitors to the newly opened Woodward's complex are greeted by an unexpected scene: a chaotic street battle, where police with batons drag defiant hippies into the back of a van, and officers on horseback corral crowds of longhaired men and women. Spectators to the event are huddled against storefront walls while rioters flee through the streets for safety. 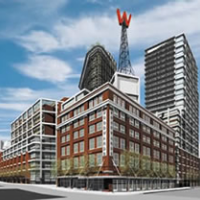 Woodward's Takes Shape: 'Nothing like it in North America'

The scene is from a massive photo installation that now hangs above the Woodward's atrium. Spanning 50 by 30 feet, it is a depiction that is at once familiar yet foreign to Vancouverites -- the type of imagery usually broadcast from foreign cities and far away conflicts. But for people of a certain generation, this image revives forgotten memories of Vancouver. The stores in the background, the uniforms of the police and the vintage of vehicles are all meant to remind one of a Vancouver from an earlier time.

Entitled "Abbott & Cordova, 7 August 1971," the gigantic image by Vancouver artist Stan Douglas is a representation of a little known but crucial moment in Vancouver and the Downtown Eastside's history. On that date, Vancouver police, in full riot gear, violently broke up a Smoke-In, a peaceful marijuana protest, inciting mayhem and destruction on Gastown's streets. This event was the climax to heightened tensions between local government, hippies squatting in empty industrial buildings throughout Gastown and the predominately blue-collar families that had populated the neighbourhood for over a century.

The riot, also known as the Battle of Maple Tree Square, ultimately led to the city zoning the area as strictly commercial. With this banning of residential use, the community's social infrastructures slowly collapsed and, in a neighbourhood rife with disunity, economic and social class divisions emerged. Through his photo installation, Douglas is reviving a lost memory, highlighting a decisive shift in the use and policing of public space in Vancouver.

At a new cultural epicentre for Vancouver

Although representing the past, Douglas's image is very much concerned with the current status of the Downtown Eastside. When asked by Megaphone why he chose to reenact the events of 1971 for the Woodward's atrium, Douglas drew a connection with the new development.

"The riot was a critical juncture in the history of the Downtown Eastside," he said. "It affected civic attitudes toward the neighbourhood that would eventually be manifest in zoning and policing policies. The Woodward's complex is itself another juncture, but hopefully a more positive one."

Officially opened on Jan. 15, Douglas's image is an interesting and compelling addition to the much talked about and immediately iconic Woodward's development. The installation is in the main public atrium of this new cultural epicentre, which offers a mix of community space, university classrooms, galleries, shops, subsidized housing and private luxury condos.

The provincial and municipal governments, as well as developers, have invested hundreds of millions of dollars in this development with the hope of creating a safe public space to ignite interest and capital investment in the middle of this problematic community.

Douglas was initially invited by Woodward's architect Gregory Henriquez to propose a public artwork for a building in North Vancouver. Knowing Henriquez was working on the Woodward's development, Douglas said that instead he would be more interested in proposing a project for Woodward's. Together, they hashed-out a number of ideas, eventually deciding on a depiction of the 1971 riot.

After finalizing the idea, Douglas designed a scene to photograph based on historical research of the area. Like a Hollywood movie set, Douglas hired a film crew and had a replica façade of the Cordova and Abbott streets intersection (circa 1971) constructed on the Pacific National Exhibition grounds. He then employed actors to play riot police, hippies and bystanders.

Nearly 40 years after the Gastown Riot, Woodward's has grown out of a long public debate between governments, social activists and the community. Since the Woodward's Department Store closed its doors in 1993, many organizations have advocated for the site to be developed into social housing for the neighbourhood's homeless. This dispute escalated in 2002, when activists and the homeless squated in the building, before being evicted by police. The activists then held a tent city around the building that lasted for 90 days.

Ultimately, the land was developed jointly with provincial, municipal and private interests, offering community space and a percentage of social housing. Emerging from this conflict, the Woodward's building has now become the focus of gentrification within the community. Douglas's installation of the riot image within the building gives presence to the community's fraught and at times forgotten histories, as well as the municipal and provincial governments' agenda to control the area's image by whatever means.

Adding to the riot image's relevance, Douglas's use of Hollywood film production techniques speaks to an industry and mode of labour specific to Vancouver and the Downtown Eastside, confronting a major aspect of Vancouver's contemporary persona as a city that never plays itself. Home to the third-largest film production industry in North America, Vancouver is constantly cast as playing other fictional and real cities. More specifically, the Downtown Eastside is in high demand for its gritty looking streets and brownstone buildings. This industry invades these public spaces, exploiting the city as a backdrop but never telling the story of its streets. In this case, Douglas is telling Vancouver's story but within the construct of an immaculately built film set, oddly separated from the real streets.

The Gastown image revives a history many may have forgotten and many more have no knowledge of. This is why Douglas says that "public art can be more than just large-scale decoration." The image installed at Woodward's has the potential to create conversation and dialogue about the new Downtown Eastside community. It has already happened through press coverage of the installation, which has focused on re-telling the riotous history it emerged from. Much like a billboard advertisement in scale, Douglas' work stands as marker of the complexities and struggles in the area -- past, present and future.

Upcoming: The Tyee interviews Gregory Henriquez, architect of the new Woodward's as he gives a guided tour.