An international art mystery that began in Paris and Toronto in the 1920s is being played out at Renaissance Gallery right on Pender Island. 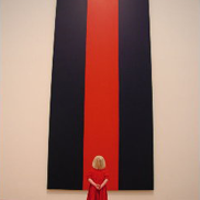 The Art of the Politics of Art

In 1904, a 25-year-old Canadian painter named John Wentworth Russell left the parochialism of his native country to try his luck in the capital of the art world, Paris. Born near Hamilton, Ontario, and trained at the prestigious Art Student's League of New York, Russell attacked Paris with his sketchbook and his ambition. By 1906 he had shown his work at the most important exhibition in the world's most important art city, the famous Paris Salon. Among his many commissions were several illustrations for Vogue Magazine, including his first at the tender age of 20.

During the next 50 years, he established his name as one of Canada's top international artists. He painted five portraits of Canadian Prime Minister Sir Wilfred Laurier, another of Prime Minister William Lyon Mackenzie King, and yet another of King Edward VIII.

Russell was a loner. He joined no painting circles. He regarded the Canadian Group of Seven as amateurs, referring to them as the "jazz band of Canadian art." In an article in the Toronto Telegram he was described as "member of nothing, honoured (by request) by nobody."

Still his fame grew. It culminated in 1927 with two shows, one at the Paris Salon, another at the Canadian National Exhibition in Toronto. At the Salon, critics raved over a large oil canvas of a reclining nude, and it was hung in a place of honour. Many called the painting the best work at that year's Salon. Meanwhile across the ocean, another nude, named "A Modern Fantasy" caused a different sensation. The Toronto Globe ran a review under the headline "Objectionable Pictures." The Toronto Star countered with "Why make vulgarity a divine thing?" Yet the exhibition broke all previous attendance records for the CNE, with 158,888 people filing past the "Fantasy," more than doubling the previous year's attendance. Russell, himself, dismissed Canadian's priggishness as "backwoods" and returned to Paris.

Throughout his painting life, Russell travelled throughout Europe with his wife, Anna, painting in Greece, Spain, France, and Canada. His work was collected by all the major galleries in Canada, the National Gallery of Canada, the National Archives of Canada, the Art Gallery of Ontario, the Hamilton Art Gallery, and the House of Commons. When he died in 1959, his body of work was comparable in quality and quantity with any Canadian artist, living or dead.

'He could do anything'

Flash forward a decade. A young art student and restorer, Jan Huk, escapes the communism of his native Prague, emigrates to Toronto and opens a gallery next to a bookstore. He makes friends with a salesperson in the bookstore, a woman with a bachelor apartment. Anna Russell discovers Jan's skill with art restoration and invites him to her apartment. There Jan discovers the work of this widow's husband, John Wentworth Russell.

Trained in Europe, Jan could see how talented the Canadian-born but Europe-influenced Russell was. "He was a master. He worked in every media -- pencil, water, oil, etchings. The works were super-real, yet they were free hand. He could do anything!"

Jan helped the widow with the paintings. He repaired some. He built a steel cabinet on her balcony for her clothes so she could hang more of her beloved husband's works in her tiny apartment. They dined together. She taught him about Spanish wine and Canadian antiques. When Jan married Milada, she, too, became one of Anna's closest friends. But something was wrong.

"I could see how good these paintings were," Jan says, "but his reputation had faded because his wife had hoarded his paintings. They weren't on the market. Anna was dirt poor but lived surrounded by riches. I tried to convince her to have a big show so she could make some money and put Russell's name back on the Canadian art map. But she couldn't part with them. They were the last reminder of her husband, and she loved them too much."

When Anna died 10 years ago, the family offered the paintings to the National Gallery of Canada. But with no budget for restoration, the NGC refused all except those in perfect condition. The family offered Jan and Milada first chance to buy the works, and because of Jan's abilities at restoration, they bought "hundreds" of paintings. Among them, two large nudes in oil, both painted in Paris, one in 1923 and one in 1927. Both needed thorough cleaning, and Jan set to work.

Now that they've been restored, the NGC wants "A Modern Fantasy" back because of its historical significance due to the 1927 CNE show. The Huks agree that one of the nudes should go to the NGC, but which of the two nudes drew rave reviews at the Paris Salon, and which nude drew scandalized crowds to the CNE? Jan says the painting shown at the CNE must be the one painted in 1923, because in an era before air travel, there would not be enough time for a painting completed in 1927 to make the journey to Toronto. The NGC disagrees. Negotiations continue.

Have a good look

Meanwhile Penderites get to judge for themselves. Both magnificent canvasses are part of a show entitled "The Group of One -- The Works of John Wentworth Russell," now hanging at Renaissance Gallery at 3302 Port Washington Road, between 11 and 5 daily. They hang along with dozens of other works Jan and Milada have restored, stretched and framed for the exhibit. They include some of the Vogue works, many nudes and still life works, sketches, canvasses and pastel works.

For Jan, the show is the fulfillment of a promise he made to Russell's paintings 40 years ago. "It's like they have come home," he says, gazing at the works that fill the walls of the tiny gallery. "We'll sell some, but we'll end up with most of them. That means they'll stay home." Like Anna Russell, Jan and Milada love the paintings almost too much to part with them.

See all the Russell works, including the two nudes, every day at their Port Washington Road Gallery. A special reception is planned for part two of the Russell show on Feb. 13 between 2 and 7 p.m.