Time was you could separate people into three categories based on their relationship to Tom Waits: those who knew his music and loved it; those who knew his music and hated it; those who didn't know him at all. Fast-forward to 2009 and those categories have been offset by creeping indifference -- now most people seem to know him, and, sadly, few people seem to care. That's a sad state of affairs for an artist once considered fairly provocative. 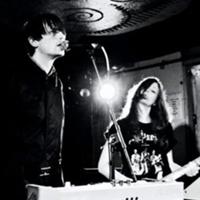 Dodging from a Distance

An impromptu poll at my office revealed people identified Waits as the "weird guy in the bowler, kind of does circus music." Fair enough. Waits is that guy, scary as hell, shouting about sailing to Singapore and Jesus like you've never known him and wells and holes and all manner of bad sounding voodoo.

But Waits is also the man warbling how innocent you are when you dream, and how much he hopes to never fall in love with you. Waits is a showman and a salesman, a carnival barker hocking his particular brand of sentimentality. Can it all be a bit much at times? Sure. His last three proper studio albums, Alice, Blood Money, and Real Gone, verged on parody. But more than anything else Waits is selling stories, and as storytellers go he is almost without equal.

Right this minute you can go to his website and download the first eight songs off his latest live album, Glitter and Doom. You should download it even if you've never heard of Waits as a sign to the record companies that this is the kind of thing you like, that getting half of an album at 320 Kbs as a preview is right in your wheelhouse.

Well they call me William the Pleaser

I sold opium fireworks and lead

when the shadows get long I'll be dead.

At 60, Waits' voice has lost all of its nuance. Where once he could gently whisper and even do a passable croon, there is now only broken glass and hard nights. But Waits didn't make his name by being a hit-repeating jukebox, and the well-worn timbre suits him as much as his ubiquitous fedoras. On the demented sea shanty "Singapore" the tune remains the same, but the melody has morphed into something darker and more strange -- no simple task considering the tale is all about a one-armed dwarf captain.

Barnburner "Goin' Out West" was made to be played live; you can practically see the dirty bar, the sweat, the fists of gold nuggets. Waits is completely incomprehensible by this point, his voice just another instrument, but when he slows down to tell us "he looks good without a shirt, good without a shirt," you believe him. The man may not sing worth a damn anymore, but he sure spins a good yarn.