The Cove is not for the faint of heart, nor anyone possessing what is generally known as human feeling. But for all its Sturm und Drang, the film has some of the same problems it criticizes; its villains are estranged from the natural world, and the film estranges us as well. 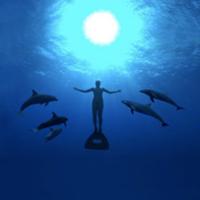 The story begins with a man named Ric O’Barry, who became one of the most famous dolphin trainers in the world thanks to the success of the Flipper television series in the mid-1960s. Now pushing 70, O’Barry has spent the last few decades traveling the world to free dolphins from captivity and bring attention to their plight. Captivity may be a slow death for these animals, but as O’Barry discovers, the trade in show dolphins has led to other forms of extremely quick and brutal death, often at the end of a Japanese harpoon.

In the tiny coastal community of Taiji, Japanese fishermen herd dolphins by banging on long metal poles -- creating, in essence, a wall of sound. Once the dolphins are driven close to shore, captured and penned, dolphin trainers assemble the animals they want for aquariums. The remaining animals are slaughtered for their meat. As the film demonstrates, that meat is so laced with mercury that it is actually toxic. Naturally, they feed it to schoolchildren.

Trying to save 70 per cent of the planet

O’Barry’s work came to the attention of filmmaker/photographer Louie Psihoyos, who founded the OPS (Oceanic Preservation Society). No stranger to the systemic degradation of the world’s oceans, Psihoyos had also traveled the globe, documenting the decline of coral reefs and the predation of humanity on the oceans. The intent of the OPS was to make documentaries about the loss of ocean life. In the words of Mr. Psihoyos, “our motto is that we’re not trying to save the whole planet, just 70 per cent of it.”

O’Barry and Psihoyos connected at a conference on marine mammals. O’Barry, who was supposed to be the keynote speaker, was summarily removed at the behest of Seaworld. O’Barry invited the filmmaker to visit the tiny village of Taiji to witness and document the secret butchery of dolphins. The rest unfolded like a something out of a John le Carré novel, or perhaps more accurately, a Clive Cussler blockbuster.

EXCLUSIVE SCREENING OF 'THE COVE'

The Cove premieres in Vancouver on Aug. 13. Find out how you can win tickets to the event here. Vancouver free-divers Mandy-Rae Cruickshank and Kirk Krack will participate in a Q&A after the premiere with the Tyee's Steve Burgess. An additional advance screening on Aug. 12th will also include a Q&A session with The Tyee's Dorothy Woodend.

The filmmakers assembled a team -- including world-champion free divers Mandy-Rae Cruickshank and Kirk Krack (both of Vancouver), a former member of the Canadian Air Force named Simon Hutchins, DNA scientist Scott Baker and surfer Dave Rasta Rastovich -- to mount an elaborate sting operation on the scale of a military campaign.

A gory kind of boy’s own adventure

In spite of the grimness of their subject matter, this part of the story plays out like a boy’s own adventure, complete with whispered code words, walkie-talkies, sneaking out after dark, and being chased by the bad guys. This is not to deride what director Psihoyos and his team managed to accomplish, although their enemies (a bunch of Japanese fishermen) don’t seem all that well organized. But after all the drama is over, you may well be left with some nagging questions.

Not lacking in ambition, The Cove expands far beyond what happens in a tiny region of Japan, encompassing the collapse of the worldwide fishing stocks, the international politicking at the International Whaling Commission, Japanese imperialism, Minamata disease and even the question of sentience itself.

This is a lot of information to pack into one movie, so much so that you may wish to take notes. The film covers some of the same territory as End of The Line, Shark Water, and a host of other films that start out with dire facts and end by exhorting audiences to “Visit this website!”

Every political act has to start somewhere, even with something as small as signing up for a newsletter, and as The Cove's director says, “You’re either an activist, or you're an inactivist.” There’s nothing wrong with that. But one must always question the methodology of the messengers, and in the case ofThe Cove, this is a bit troubling.

Sacrificing what they want to save

The team’s elaborate operation, complete with underwater cameras hidden in fake rocks, military-grade night vision goggles, and thousands of pounds of high tech equipment, rescues no dolphins. The point, of course, is to capture their slaughter on camera, and for this reason, they must be sacrificed.

Blood in the water is effective -- it incites moral outrage and a deep visceral reaction. When I watched the film in the theatre, girlfriends turned to boyfriends to hide their faces from this awful act of cruelty. People wept. They felt something. Whether or not this type of emotional reaction lasts longer than the theatre’s houselights coming up remains to be seen. The film ends with the ominous warning that the dolphin hunt will resume this coming September (which is now little more than a few weeks away).

It’s extremely easy to react with righteous moral indignation to what ‘other people’ are doing while feeling a hot surge of nobility in your chest. The film risks oversimplifying things in the pursuit of creating the biggest emotional reaction possible. Because we’re shocked, we must be good and innocent. But by the very fact of being human, we are all implicated.

To portray the slaughter of innocents, you need a villain to do the actual killing. In this case, it’s the Japanese, who are often portrayed as brutes or government automatons. Certainly there are noble city councilmen who stand up against the practice of poisoning little kids with mercury-tainted meat, as well as ordinary Japanese people, who haven’t the faintest clue what their government is up to.

It’s almost too easy to make the Japanese fishermen, who don’t speak much English, look like brutes. But they’re probably not much different than the Canadian farmer down the road who kills cows for a living.

The film pointedly questions this type of rationalization, claiming that the dolphin hunt stems not just out of economic necessity, or accepted cultural practice, but is also the result of stubborn human perversity and national pride. The filmmakers maintain that they offered to pay off the fishermen, but were refused on the grounds that the dolphin hunt is also about “pest control.” Dolphins, like people, eat fish, and as the fishing stocks continue to dwindle, Japanese fishermen blame the only other large sentient mammals around. The film portrays their attitude as “eat or be eaten,” but it’s more complicated than that.

In an interview with Frontline on PBS, O’Barry talked specifically about the idea of dolphins in captivity. “So any intelligent person who sees a trained dolphin show whether it's Shamu or Flipper or Keiko or whatever, would have to conclude if they were honest, that what they just witnessed was a spectacle of dominance. That's what's wrong with it. It teaches us that dominance is good. Dominance is right, dominance works, and that's the problem.”

A fatal loss of empathy

This is the most pivotal idea in The Cove, but it gets a bit lost in amongst the screaming, bleeding animals. It’s a deeply embedded idea that everything in the world is there simply for the taking -- and, more often than not -- the eating. It is the loss of empathy, not just for other human beings, but for everything. The Cove makes that attitude seem so total that we despair of changing it.

After watching The Cove, I came home and listened to a message from my sister about killing a giant spider she found in her basement. It struck me suddenly that if it's difficult to have much sympathy for other humans, what hope do dolphins and spiders have?

The Cove argues that if we can’t save a creature that is at least as intelligent as ourselves, we have no hope of saving the world. I don’t want to take the pessimistic view, but after watching film after film after film about the loss of regard for the planet and its citizens (everything from wasps to whales), hope is easily killed. One day it may become completely extinct.