Vancouver Mayor Kennedy Stewart wants to introduce the “strongest renter protections in Canada” for the proposed Broadway Plan. Are they really that good?

Construction on the Broadway subway has begun and the plan charts the densification of this major corridor. The corridor covers about 500 blocks bounded north-south by First and 16th Avenue and east-west by Clark Drive and Vine Street. City council is currently hearing from a list of over 200 speakers on the plan, and the public hearing will last until early June.

While there is intense support and opposition on everything from the size of towers to the needs of future residents, one of the big questions is how existing renters will be affected. The federal measure of unaffordable housing is spending more than 30 per cent of one’s income on shelter. According to census data, 44 per cent of Vancouver’s renter households live in unaffordable housing — almost half.

The Broadway corridor is well-known for its rental stock. A quarter of the city’s purpose-built rental stock is here, everything from century-old brick buildings to postwar wood-frame walk-ups.

Rents have remained relatively affordable due to the age of the buildings. The vast majority of this rental supply — 83 per cent, to be exact — is over 50-years-old.

The big fear is this: the displacement of renters as land values around Broadway heat up and rental apartments are targeted for denser redevelopment.

But Mayor Stewart says renters shouldn’t worry because he has “your backs.”

So what’s he proposing?

First, a displaced renter will be relocated to a temporary rental. The developer will compensate them for the difference in rent to ensure they’re not paying more than before. Moving costs will also be covered.

Then when the new building is complete, the renter will be invited to return to a unit in the new building. They will have the ability to rent that unit at 20 per cent below the citywide average, based on data from the Canadian Mortgage and Housing Corp.

Of course, Vancouver rents are ever-soaring, so if their discounted rent in the new building is higher than what they paid before the property was redeveloped, they can opt for the latter. They could also choose not to move into the redeveloped building at all and take a cash payment from the developer instead, based on how long they lived in the old building.

“This is actually grabbing the market by the scruff,” he said.

On the supply side, the Broadway Plan intends for the area’s homes to be one-third condo and two-thirds rental, which includes market units, below-market units and social housing.

In the first 10 years of the 30 year plan, the city expects 1,500 below-market rental units and 930 units of social housing. The city generally defines social housing as units that are run by a non-profit or government agency, rent for below-market rates and may offer services related to health, substance abuse and life-skills training.

The city plans to give extra density to developers who are willing to build rental housing, with different percentages for different types.

Sauder, a renter, is pleased with the prospect of new rental units after some gruelling home hunting himself: “When I was looking for two-bedrooms, I was looking at the same 16 [units] for five years.”

He hopes city council will approve the plan, with the mayor’s proposed renter protections.

“If we don’t have the proper plan in place, we don’t get those expanded protections, we don’t get the capital investment,” he said. “[Those renters’] buildings are going to be up for redevelopment in 10 to 15 years anyway. We should make sure that developers pay to take care of the people who have the most precarious living situations.”

Before Mayor Stewart was elected, he was the MP of Burnaby South. In the 2010s, old apartment buildings were destroyed en masse, and their residents evicted, to make way for condo towers by the Metrotown SkyTrain station. Vancouver city hall wants to avoid the same situation.

Another renters group, however, is skeptical about the mayor’s grand promises.

“None of those words matter on a piece of paper if they don’t get enforced. We don’t believe they will get enforced,” said Mazdak Gharibnavaz, an organizer with the Vancouver Tenants Union.

His group recently created a renters plan for Broadway, which contains survey results that show many renters are paying much lower than market rents. This is because they’ve lived in the units for so long, having locked into rent control back when rents were cheaper.

Gharibnavaz worries about landlord ploys because their profits could be so much higher if they rented their units to new renters at today’s market rates.

Gharibnavaz complains that the city has no enforcement body to ensure that developer-landlords are following the required renter relocation and compensation policies as they were intended.

The group has long been lobbying the province to tie rent control to units rather than tenancies so that landlords aren’t incentivized to evict their tenants.

“The transit project and the Broadway Plan — this is scary stuff for renters,” said Gharibnavaz. “But this is also a once-in-a-generation opportunity to really organize a movement that’s not going to let what’s been the status quo for decades continue.”

Redevelopment takes years and renters who depended on the location of the Broadway corridor may be displaced to another part of the city, even if they’re paying the same rent, notes the group. Gharibnavaz worries that seniors or people with disabilities might be relocated to a far-flung location that causes hardship.

The group also worries about tenants being eventually relocated to a much smaller home, as is the case with units in newer buildings. The group wants the city to mandate minimum unit sizes to account for different stages of life and family compositions. 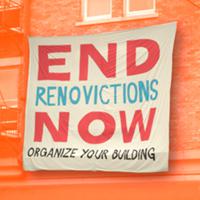 Is It Time for Renters to Unionize?

With the Broadway subway causing land prices to heat up, Gharibnavaz wishes the city purchased properties in the area ahead of time to keep valuable land in public hands to be used for a social purpose like housing.

“We’re never hearing about solutions about maintaining or lowering land prices,” he said of governments. “They have a financial interest in for-profit development going forward. It brings in money for them.”

The Broadway planning process has once again led the Vancouver Tenants Union to ask big questions of who gets displaced in city-building decisions, says Gharibnavaz.

“Single-family home plotlands — how come those are never viewed as the thing to go after? How come it’s always renters? The answer is obvious: politically, landowner interests are very much highly prioritized. That’s really the simple point of it. We need to get society to a point where governments are more afraid of tenant power than they are with landowner dissatisfaction.”