On May 17, just three days after the racial-hate-motivated massacre at Tops Friendly Market in Buffalo, N.Y., Jason Kenney’s Alberta government was publicly complaining about new federal regulations intended to ensure that the increasingly frequent mass shootings in the United States stay south of the world’s longest undefended border.

The day before that, Alberta Chief Firearms Officer Teri-Jane Bryant sent a snippy letter to federal Public Safety Minister Marco Mendicino making the highly disputable claim in defence of AR-15s and similar military-style rifles that “prohibiting specific types of firearms is an approach that has proven ineffective in improving public safety.”

Now that there has been yet another tragic and deadly mass shooting in the United States, this time at an elementary school in Texas, does that mean we will have to brace ourselves for another ritual exhibition of public support for gun-nuttery by the United Conservative Party in the next few days?

Hopefully not. The May 17 release, at least, seems to have been timed to appear the day before the new federal rules took effect.

In addition, Kenney’s embarrassing underperformance in the next day’s UCP leadership review vote, which led directly to his announcement he would be resigning one of these days, may have reduced the UCP’s perceived need for performative attacks on federal gun-control legislation.

Still, neither sensitivity nor good sense have ever been hallmarks of the Kenney government. Its May 17 effort to wind up the gun-nut element of the party base in response to Ottawa’s May 11 announcement of more stringent rules on the sale and transfer of firearms was remarkably insensitive under the circumstances. So we probably should brace for more of the same, just in case.

“Once again, the federal government is misplacing the burden of public safety on law-abiding firearms owners and retailers with this misguided policy,” huffed Justice Minister Tyler Shandro in the government’s news release that day, seemingly unconcerned by the optics of such announcement hours after another murder spree in the United States.

“I am glad we created the chief firearms office to advocate for common-sense firearms legislation that avoids wrapping up simple transactions in red tape,” he added self-righteously.

As for Bryant, a gun collector who was appointed to the post in August, she was quoted in the May 17 release calling the federal gun-sale legislation “a back-door gun registry” and complaining that “distressingly little” had been done by the feds “to prepare individuals, businesses or my staff.”

Why they would pay any attention to her staff is unclear, since the purpose of her appointment and mandate is clearly to obstruct the enforcement of federal law.

As Kenney himself once acknowledged, the chief firearms officer’s job is to uphold the law “in a way that focuses enforcement on criminal misuse of firearms rather than regulatory harassment of safe, legal law-abiding farmers and duck hunters.”

That is to say, to uphold the law by ignoring the parts of the law with which the UCP doesn’t agree.

The point of all the verbiage in the government’s news release last week was Bryant’s call on Ottawa to “either immediately announce a one-year moratorium on the introduction of the new requirements to allow for proper consultation and refinement, or abandon the entire project.”

Fortunately, the Trudeau government is inclined to pay little attention to huffing and puffing by the Kenney government about topics within federal jurisdiction, especially this one.

Since well before its election in 2019, the UCP has been impatient to find a way to impose U.S.-style gun laws on Alberta and Canada, a development that would have predictably deadly results.

In 2018, the then-opposition UCP’s “rural crime task force” — which included one member who has since spent time in jail — proposed allowing rural residents to defend their property from bad guys, real and imagined, by shooting them. This, obviously, would be a homegrown version of American “stand-your-ground laws,” notwithstanding a weak UCP denial that this was the intention.

Kenney hinted at a news conference that the work of the committee might result in his government supporting lawsuits by Albertans “to challenge aspects of Ottawa’s recent regulatory overreach.”

Meanwhile, the unrelenting slaughter in schools, churches, businesses and homes continues with metronomic regularity in the republic to our south, which now appears to be undergoing a deadly mass psychotic breakdown. It’s unlikely anything can be done in that country to stem the bloody tide. 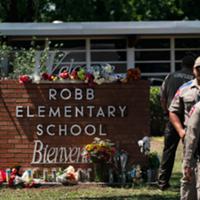 Portrait of a School Shooter

Some progress is being made in Canada, no thanks to federal Conservatives like leadership candidate Patrick Brown, who vowed Tuesday to “scrap the Firearms Act in its entirety and work with experts — including law-abiding firearms owners — to replace it with a new law that takes protecting our streets just as seriously as does defending the rights of Canadians.”

You all know what that means.

Even without the possibility of a wholesale attack on Canadian gun laws by some future Conservative government, we shouldn’t be smug about being on the safe side of the 49th parallel. Gun crimes are growing here, too.

According to Statistics Canada, Edmonton had a 97-per-cent increase in the number of firearms-related homicides in 2020, while the increase in Calgary was 48 per cent. Both cities recorded the largest increase in homicides among all metropolitan areas in Canada.

And yet the UCP is doing what it can to ensure that more guns find their way into the hands of more Albertans.