Where are Alberta Premier Jason Kenney and his United Conservative Party now that evidence is accumulating the disruptive and threatening “Freedom Convoy” occupation of Ottawa is being funded and supported by far-right activists in the United States?

Kenney and his crowd, after all, were the guys who demanded a “public inquiry” into alleged foreign funding of Canadian environmental charities opposed to further development of the Alberta oilsands.

But the inquiry by Calgary accountant Steve Allan turned out to be a flop. Last fall, after zero public hearings, it delivered a report concluding the environmental non-governmental organizations had done nothing wrong, which was nevertheless spun into defamatory hot air by Kenney.

By contrast, the evidence of American interference in the attempt to overthrow the recently re-elected Liberal government with truck blockades supposedly protesting provincial vaccine mandates is compelling.

The paw prints of malign actors like former Trump administration ideologue Steve Bannon are all over the occupation of Ottawa by the “Freedom Convoy” and disruptions of other Canadian cities and transportation corridors by far-right rent-a-mobs.

Journalist Sandy Garossino, a lawyer and expert on the Canadian charitable sector, calls the $10.1 million raised by convoy protest organizers’ GoFundMe campaign in the two weeks before the crowd-funding site suspended it Friday “extremely suspect.”

“If you think there’s something extremely fishy about the GoFundMe ‘Freedom’ campaign, you’re onto something,” she wrote in the National Observer.

For one thing, she said, “the campaign’s donation pattern is wholly unreliable. To any knowledgeable observer just looking at the data itself, the irregularities are a five-alarm fire.”

GoFundMe did not attempt to verify the identities of donors and admitted accepting foreign donations for a campaign to dissolve Parliament less than five months after a free and fair election in which a clear majority of voters supported parties in favour of vaccine mandates.

At least a third of the donors were not identified by GoFundMe, Garossino said, and the use of fake names and stolen identities was rampant.

Readers will recall that allowing political parties to use the names of real people without their consent in party nomination elections, with their fees paid by unidentified third parties, is a fraudulent practice that was recently legalized in Alberta by Kenney’s UCP government.

Garossino also noted that the massive success of a previously unknown fundraiser for a political cause that is not a registered charity completely breaks the normal pattern of successful Canadian fundraising campaigns. “Any Canadian fundraiser will tell you this number is impossible to achieve organically within Canada,” she stated.

When California-based GoFundMe shut down the campaign, citing illegal activities by the occupiers, the convoy organizers switched to GiveSendGo, a Delaware-based “Christian” crowdfunding site, which now claims to have collected donations of $3.1 million from about 31,000 donors with a campaign goal of $16 million.

According to the Ottawa police, as reported by the Washington Post, “a ‘significant element’ from the United States has been involved in the participation, funding and organization of a self-described ‘Freedom Convoy’ that has for several days jammed streets in the capital.” The revelation of U.S. interference in Canadian affairs seems to have been greeted with little concern in the United States.

“This exercise has the hallmarks of an op, complete with the potential for wire fraud and money laundering,” Garossino said.

Add to this the noisy support for the “Freedom Convoy” among far-right media and politicians in the United States and you get a pretty clear idea of where a large part of the funds originated.

Former U.S. president Donald Trump and his eponymously named son both pumped the protest, as did billionaire Elon Musk.

In a statement, the elder Trump called Canada’s prime minister “far-left lunatic Justin Trudeau who has destroyed Canada with insane COVID mandates,” showing a remarkable level of ignorance for a former head of state about Canadian jurisdictions, the reliable neoliberalism of Trudeau, and the current undestroyed state of the Dominion.

Apparently also unaware that Canada is a sovereign country, Florida Gov. Ron DeSantis and state officials in Virginia and Louisiana vowed to investigate GoFundMe for not handing the cash donated by U.S. supporters to the law-defying rent-a-mob.

Well, to give DeSantis his due, he’s probably right to say American donors should get back the money now permanently frozen by GoFundMe — if only to help Canadian authorities identify who those donors were.

Georgia Congresswoman Marjorie Taylor Greene, the notorious white supremacist and QAnon follower, called GoFundMe “corporate communists” and said “they should be arrested” for interfering with the right of Americans to fund insurrection in Canada.

Right-wing American media personalities also piled on. For example, according to Fox News bloviator Tucker Carlson, “there’s no more fearful despot than Canada’s prime minister.” Lately Carlson has developed a certain fondness for Russian President Vladimir Putin, the usual recipient of such vilification by the United States, so I suppose someone had to be chosen for the role of scapegoat.

There is also wide use of iconic U.S. symbols by the truck protesters in Canada — among them, the U.S. Stars and Stripes national flag, the Confederate battle flag, Trump 2024 flags and the Gadsden flag, the yellow “don’t tread on me” banner first used by American rebels against the British Crown in 1775. 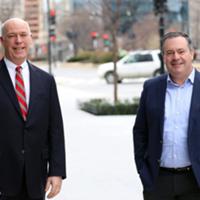 My personal favourite, though, seen on hand-lettered signs among the crowd in Ottawa, is “2022 is 1776.” This is a reference to the year the American traitors to the Crown signed their Declaration of Independence. That led to war with Britain and the eventual influx of about 40,000 Loyalist refugees into Canada. The Loyalists played a key role in the development of this country’s unique national character.

So, given their past concerns and their obsession with whitewashed colonial history, one would have thought Kenney and the UCP would have something to say about this undeniable interference in Canadian affairs by our powerful neighbour to the south.

If nothing else, the occupation of Ottawa and disruptions in other Canadian cities last week has the appearance of a classic “colour revolution” of the sort promoted by western governments — including Canada’s — in places like Kyiv and Kazakhstan. 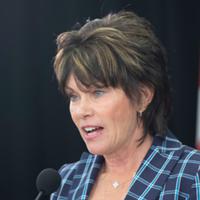 Since it seems unlikely the White House and U.S. security agencies are involved, could this attempt to foment a Canadian Euromaidan be the first freelance colour revolution?

Could it be, therefore, that Canada’s anti-vaccine convoys really are what Garossino calls “a dry run for an American uprising?”

One can only hope our Canadian security agencies are paying attention and are not so blinded by the desire to remain part of the “Five Eyes” intelligence-sharing club that they forget the interests of the country they serve.

Whatever Kenney and the like-minded group now in control of the Conservative Party of Canada might say, a serious Canadian investigation of the GoFundMe and GiveSendGo campaigns should be a national-security priority.