It’s not every day they award a Nobel Prize in economics on a topic directly relevant to the political discourse of Alberta, so it is my duty to note Monday’s announcement that Canadian-born economist David Card was accorded the honour for his pioneering work using “natural experiments” to show that raising the minimum wage won’t cause jobs to disappear.

Paul Krugman, the New York Times’ economics columnist and a former winner of the prestigious bauble himself, noted that Dr. Card got the prize for his methodology for how to study things like minimum wages, not necessarily what the effect of minimum wages might be, which has been a topic of lively discussion for a long time.

Card and his research partner Dr. Alan Krueger, who has since passed away, had the bright idea back in the 1990s of comparing what happened in neighbouring U.S. states when one raised the minimum wage and the other didn’t, and then thinking of it as a natural experiment.

Card teaches at the University of California, Berkeley. Krueger served as chair of president Barack Obama’s White House Council of Economic Advisers from 2011 to 2013. He was briefly president Obama’s assistant secretary of the treasury.

I’ll leave the fancy technical commentary to the professional economists. Nevertheless, what the two economists found, as Krugman pointed out in his column, “was that the increased minimum wage had very little if any negative effect on the number of jobs.”

So, Krugman went on, “these results make the case not just for higher minimum wages, but for more aggressive attempts to reduce inequality in general.”

Now, this isn’t exactly a shocker.

For well over a century, a parade of iconic figures on the right have predicted civilization’s end as a result of higher wages — and every one of them has been proved to be wrong.

The preponderance of evidence, economics columnist John Cassidy wrote in a useful piece in the New Yorker in 2012, shows minimum wages in North America are low by historical standards, that there are no obvious links between rising minimum wages and unemployment, and that the potential costs of raising minimum wages are small.

Part of that evidence would have been Card and Krueger’s 1993 study, which showed what happened at fast food joints in New Jersey, which raised its minimum wage, and eastern Pennsylvania, which didn’t. What happened was nothing — at least, nothing different — as far as the number of employees went.

But even back in 1865, two years before Canada became an official country, Karl Marx himself took time out from his busy schedule fomenting international communist revolution to write a pamphlet debunking the claims of those who insisted better wages for the working class would spell the doom of civilization as we knew it.

But you never would have known this was a topic of debate from local media coverage of the screechy claims made by business owners and their favoured political parties in Alberta after 2015, when the NDP came to power promising to raise the minimum wage to $15 an hour.

The piercing howls of outrage and horror from all the usual suspects on the right, including Restaurants Canada, sundry fast-food businesses that swore they would have to close up shop or at least have to stop serving Big Macs at 3 a.m., and, of course, the various Conservative parties of the day, are still ringing in our ears. 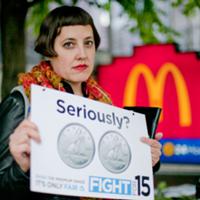 Experts Weigh In On Five Arguments Against a $15 Minimum Wage

If they managed not to close their businesses, fast-food franchise owners threatened, they’d be forced to lay off workers and whip the ones they kept even harder to keep them pouring the midnight grease.

The president of the chamber of commerce in the town where your writer resides said she was in “a state of disbelief” at the NDP policy — not surprising, I suppose, since she may never before have experienced a moment in her adult life when an Alberta government didn’t shout “how high?” when the business crowd yelled “jump!”

Restaurants Canada — the lobby group that got its start under a different name complaining about prime minister William Lyon Mackenzie King’s plan to keep a lid on menu prices as part of the fight against Hitler — begged the NDP not to raise the minimum wage until the economy improved, whereupon, of course, it would have come up with a new reason for delay.

A spokesthingy for the Canadian Federation of Independent Business darkly prophesied that if the minimum wage hit $15, many businesses would close their doors.

Of course, none of these dire predictions came true.

By 2019, after the NDP had implemented the $15 minimum wage, Alberta’s restaurant owners were in such dire straits that they were able to invest their hard-earned dollars in a high-profile PR campaign to make sure we all understood just how rough they had it — and to help Jason Kenney’s United Conservative Party defeat premier Rachel Notley to put an end to rising minimum wages.

So if the NDP returns to power in 2023, as nowadays seems like something that could happen, those who want to argue for higher minimum wages will have another arrow in their quiver for the debate that will surely follow, thanks to the Sveriges Riksbank Prize in Economic Sciences in Memory of Alfred Nobel, as the Nobel Prize in economics is awkwardly known to those few who care about such details.