The city has long held that renting a home is inherently and significantly more affordable than owning. But is it? Recent land assemblies in the city suggest that it will be difficult or impossible for rental project developers to provide rental units at rates that are affordable by average renter families. For example, a full block assembly was recently advertised in the Dunbar neighbourhood with a price tag of more than double the assessed values of the seven detached homes on the block: approximately $5.6 million each for a total price of $39 million.

This skyrocketing land price inflation was almost certainly prompted by a pending city policy which may allow this block to be converted to apartments. Significantly, the price for these lots inflated well before the council even reviewed this new rezoning policy, proving yet again that land speculators will line up years ahead of land rezonings, locking in their gains in anticipation of city action, rather than consequent to it. An offering price double the assessed values is a mark of just how much money is to be made in the Vancouver land speculation game.

Since this new policy is aimed at encouraging market rentals, the units will eventually have to rent out at rates that cover the cost of land and construction (plus a variety of other costs). A bit of fourth grade math suggests that rents in these units will be close to double what average city wage earners can afford. Here is why.

In planning terms, we can assume that the new density for this block will have a floor space ratio, or FSR, of around 2.5 — the area of the building compared to that of its site. In normal language that means buildings that are between four and six storeys. The total area of these seven lots is 1.3 acres or 57,000 square feet (of dirt). Since you can build two and a half times that number of square feet at an allowed 2.5 FSR, you can build about 140,000 square feet of interior apartment space. That gives you about 140 apartment units on the block when built out at an average of 1,000 square feet each (including common hallway and stair space).

Recently Marc Lee of the Canadian Centre for Policy Alternatives showed how the only way to provide rental housing units at a price that was even marginally affordable for average renter households was to build it on free land.

In this example, given that the land cost is equal to the construction cost, there is no way that even the most public-spirited developer can provide affordable housing on this site. Another way to say the same thing is this: the land market is already pricing in extreme unaffordability into their inflated land prices.

Now the city has long held that building market rental is the main leg of an affordable housing strategy. You can go to their Secured Market Rental Housing Policy for confirmation of this. Here you will find rationale such as “affordability will be achieved primarily through tenure, since renting is inherently less expensive than owning," and, "in addition, more market rental housing gives higher earning residents more options to choose from, lowering the pressure on demand for lower priced rental units."

These assertions are stated without supporting evidence. Given the severity of the global housing crisis, academic journals are now full of research papers which in some cases support the city's statements on this topic but in other cases do not. One important recent "meta study" (essentially a study of studies) compiled evidence from over 100 individual peer-reviewed studies to conclude that adding density spawns good things (more efficient land use, lowered greenhouse gas, supporting neighbourhood services, etc.) — but sadly, lowering prices was not one of them.

From the pre-publication abstract: “Density has important positive amenity and resource implications, but also appears to create a scarcity rent, which harms renters and first-time buyers.”

And from the 2019 Journal of Urban Economics:

“Overall, the evidence suggests that density is a net amenity. This does not imply, however, that everybody necessarily benefits from densification policies. Renters may be net losers of densification because of rent effects that exceed amenity benefits.”

To be fair the evidence in the literature is inconclusive. But this meta study does not support the view that adding new supply automatically lowers prices, as “market enthusiasts” would have it. Certainly, our experience in Vancouver would seem to support the opposite. The population of the downtown peninsula (to cite only one of many readily available examples) has doubled its number of dwelling units since 1990 while prices skyrocketed by over 300 per cent.

Thus it would seem the city is uncritically accepting the received opinions of neoliberal market enthusiasts, and embedding their dicta, without supporting evidence, in the policy documents presented to council.

Now it would surely be wrong to suggest that we build nothing at all, even if our attempts to harness the marketplace to provide affordable housing seem doomed. 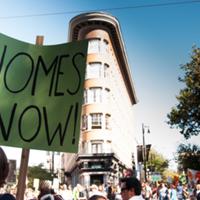 We Could Zone Whole Areas for Rental Only. Why Don’t We?

Perhaps we should follow the lead of Cambridge, Massachusetts instead. There, faced with a similar conundrum, they decided on a strategy that avoids inflating land prices by streaming what would otherwise be land-value increases lining the pockets of land speculators into social benefit for wage earners. The secret sauce was to only allow density increases in return for affordability. This strategy was specifically designed by the city, in collaboration with non-profit housing providers, to stabilize land values — so non-profit providers could compete with market providers for suitable development land.

Vancouver city council is about to be asked to rezone vast parts of the city for new market rental housing without asking for similar social benefit — potentially benefiting mainly land speculators already doing deals in anticipation of positive council action.

Let’s pause now and ask ourselves if there are better ways to reach our affordability goals — ways that don’t involve adding wealth to the already stuffed pockets of our local land speculators.