I don’t trust the theory that the SARS-CoV-2 virus escaped from the Wuhan Institute of Virology last year. It’s too good a story to be true.

Part of my skepticism is professional: escaped viruses have been the plot gimmick for far too many terrible books and movies about pandemics and zombies and the post-apocalyptic world. Even if you’ve avoided such plots, you know the general storyline, so the lab leak isn’t a brand-new idea. It’s also like a whodunit, with the villain revealed and the other suspects exonerated.

Wuhan is a class 4 biosafety research lab with a worldwide reputation. By definition, class 4 labs maintain stringent safety standards and employ rigorously trained personnel. If the lab had accidentally released the virus, at least some of the senior staff and management would have vanished by now — or been left in place as figureheads, while new people took over the real administration. Evidence of sudden personnel transfers from other Chinese labs to Wuhan could lend a degree of plausibility to the idea. Without it, my editor would simply kick me out of their office.

As for a weaponized virus, we’ll have to build a big backstory for that plot to hold together: a coronavirus is discovered maybe 20 years ago and found to have dangerous pandemic potential. Someone in the Chinese government, knowing that other governments are doing research in biowarfare, authorizes further studies. These will involve many highly skilled specialists recruited from all over China. They will likely cease publishing their own research.

(That was how the Soviets, early in the Second World War, knew the Americans were building an atomic bomb: a young Russian physicist read some recent U.S. scientific journals and noted the absence of articles by scientists like J. Robert Oppenheimer and Enrico Fermi. He went straight to Stalin with the news.)

Let’s assume these hypothetical Chinese experts tinker with their new coronavirus and come up with what we now call SARS-CoV-2. Just as nukes need testing, so do bioweapons. Assume that thousands of convicted criminals and political dissidents make up a suitable test population, and get sick or die in satisfactory numbers.

SARS-CoV-2 as we know it, however, seems capable of killing only about two per cent of those it infects, and old people succumb first while young people barely notice. Strategically, this is not a useful result.

Worse yet, developing this weaponized virus will take years. During those years, Chinese scientists also have to develop a vaccine to protect their general population and their army. Without a reliable, tested vaccine, available in quantities to protect 1.4 billion Chinese citizens, they’d be playing Russian roulette using a revolver with five live rounds.

Good luck developing, testing and producing such a vaccine without drawing some surprised international notice. China and the rest of the world have been exchanging information nonstop for 40 years, teaching each other’s students and establishing networks of personal connections. In other words: the West would have known if a vaccine for a weaponized virus was in the works in China.

What about Beijing’s reluctance to let outside scientists study the Wuhan lab? Even if the outsiders found no evidence of a leak, accepting even the possibility would be politically embarrassing. And all governments fear embarrassment far more than diseases.

In fair consideration of the first plot’s theory, the West has been responsible for its own stupid coverups. When a mysterious disease broke out in Haiti in October 2010, I had already inadvertently blogged about its cause: a cholera outbreak in Nepal, just before Nepali UN peacekeepers left to take up their post in Haiti’s Artibonite valley. The soldiers disposed of their shit in the Artibonite River, and thousands of Haitians died.

The Nepali connection was vigorously denied by the UN, its agent the World Health Organization and the U.S. Centers for Disease Control. Well, not exactly denied — the authorities kept saying, instead, that the origin of the outbreak didn’t matter. What mattered was that the cholera had to be contained.

In reality, an American journalist, Jonathan Katz, had seen and smelled the shit being pumped out of the Nepali peacekeepers’ camp, and the Haitian government understood the source very well from the start.

But the Haitian government couldn’t directly accuse the UN of inflicting death on those it was supposed to protect. Instead, it hired a French expert, Renaud Piarroux, to confirm what it already knew; he did so, was criticized by American and UN experts, and then went on to develop the plan that finally eliminated cholera from Haiti.

The cholera outbreak in Haiti should have ruined the authority of WHO and perhaps even of the UN itself. But as it is a small, very poor Black country, its oppressors somehow found the strength to endure its misfortune.

Still, Haiti was an abject collapse of expertise under political pressure and foreshadowed WHO’s future problems in responding to serious outbreaks. It was also a lesson to other countries: honesty really is the best policy.

No government wants to be held responsible for a disease outbreak. One of the implicit obligations of any government is to look after its people’s health. In the event of an outbreak, governments from municipal to national level will always be willing to find someone else to blame. China in the 2020s is an easy target — and a familiar one.

The association of Chinese people with disease is a racist story that goes back over a century, to the 1900 outbreak of bubonic plague in San Francisco. American media blamed the outbreak on Chinese workers for living in squalid conditions — imposed, notably, by racist white Californians.

No one even understood yet that infected rat fleas were the plague vector. As I wrote in The Tyee in 2006, the city’s crooked mayor and equally crooked state governor vociferously denied that the plague had arrived when the first cases broke out. The media co-operated, as did state-appointed medical experts, in contravention of the opinions and authority of federal health experts. The very wealthy business leaders of San Francisco were more than happy to join in.

The initial coverup led to Chinese victims being carried across San Francisco Bay, where plague spread to East Bay rats and then to squirrels. Plague is now endemic in the U.S. Southwest. This is another reason why coverups are bad policy.

Granted, the Chinese government has not handled the pandemic as well as it might have. This is, of course, another sign SARS-CoV-2 caught it by surprise. Local party officials covered up the first cases, allowing the virus to spread across Wuhan before the national authorities in Beijing stepped in and locked down the whole province of Hubei.

Having gathered their wits, the Chinese government then ran a master class on how to smother a pandemic. This didn’t involve the magical arrival of a stockpiled vaccine — just a public lockdown on a scale never seen before. A Chinese scientist published the virus’s genome on the internet early in January; it must have taken courage, but he doesn’t seem to have been punished for it. This genome enabled western scientists to build on earlier research and develop vaccines with unheard-of speed.

Still, Chinese authorities stumbled in seeking the virus’s origin. SARS had migrated from wild animals to humans in 2003 via markets where animals were kept until bought and butchered. So SARS-CoV-2 could have done the same. At first, the outbreak seemed to have started at a market, which had been closed and disinfected before samples could be taken. Then earlier cases were reported in patients who had had no contact with the market. SARS-CoV-2 had been loose in Wuhan well before late December 2019 — and humans, rather than wild animals, could well have brought it into the market themselves.

Beijing’s policy in early 2020 seemed to be to stall on finding the source of SARS-CoV-2 while drawing attention to its response: big temporary hospitals built in Wuhan in days, thousands of health-care workers drafted to Wuhan and a dramatic drop in cases that continues to the present day.

Xi Jinping absolutely needed this outcome. The Communist Party of China draws its authority not from the democratic will of the people but from its own competence in running a country of 1.4 billion. If COVID-19 got out of control, the CPC’s claim to competence would be a joke — the kind of joke that Donald Trump made of American competence.

We can assume that Chinese efforts to find an animal source of the virus have been ongoing, and that if they found a candidate, we would know of it immediately. We can also assume that Chinese scientists have run millions of tests to find evidence of the virus from before December 2019. A handful of reports have found SARS-CoV-2 in human sewage in Barcelona, Spain, in March 2019 and in Santa Catalina, Brazil, in November 2019. Such reports have not been followed up, but they should have been. 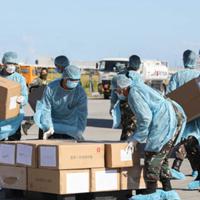 While the absence of an animal source makes a lab leak look more plausible, it’s not evidence of a leak. At most, it means we have to keep looking, even in unlikely places.

Let’s assume that the lab leak, however improbable, actually did occur. If the Wuhan lab really was studying SARS-CoV-2, and if it somehow allowed the virus to escape, we would need a careful response. We couldn’t just blame China and ignore our own botched responses — which have led so far to at least 3.5 million deaths and 170 million COVID-19 cases.

Instead, we would need to work closely with China to identify and repair errors in the lab’s safety protocols and maintain close collegial relations with Chinese scientists. We need these scientists to help end this pandemic, and we’ll need them to forestall the next one, wherever it may originate.

This is true whether a leak occurred, or Wuhan was just the unlucky victim of the first cases of an unknown natural viral disease. We’ll find out eventually, but only through international research including Chinese scientists — not just sleuthing around the Wuhan lab.

The current government of China can be hard to live with. But in a global world facing global problems, we can’t live without it either.