For 45 years, a not-for-profit housing society has run the Lutheran Manor a few blocks from Vancouver’s City Hall, providing badly-needed subsidized housing for seniors and people with disabilities.

The seven-storey building at 10th Avenue and Yukon Street was allowed under the land-use rules of the day. Getting it approved under today’s laws would be complicated, costly and time-consuming. We need to change that.

From 1961 to the mid-1970s, the “RM-3” zoned land that the Lutheran Manor sits on allowed buildings up to 100 feet (roughly 10 storeys). But in the late 1970s, most of Vancouver’s RM zones were downzoned, restricting them to a maximum height of 35 feet (four storeys). For four decades after this downzoning, senior orders of government abandoned our city, failing to provide funding for social and supportive housing amid skyrocketing increases in market housing costs.

The results have been bad for residents who don’t own property and devastating for everyone unable to keep up with rising market rents. As more and more people were priced out of homeownership, there has been greater demand for rental housing. And as more people look for rental housing, rents have skyrocketed, pricing out more young people, seniors, single parents, Indigenous people and people with disabilities. Over the next two decades, the need for accessible and adaptable rental housing for seniors and people with disabilities at affordable prices to middle and low-income residents will increase dramatically.

There is no one silver bullet solution to this housing crisis that has been decades in the making. But one of the most powerful tools a local government has is land use and zoning. And we should be making better use of it.

It is harder to construct non-profit, co-op and social housing in Vancouver than million-dollar single-family homes because of our current zoning. Our zoning regulates what sort of buildings can be built, and changes to zoning require a lengthy approval process. One out of two of the recent social housing developments required rezoning through a public hearing. One out of three market condos had to go through that lengthy, expensive process. Meanwhile, new mansions don’t require a public hearing at all.

Last month, city council unanimously approved a new zoning bylaw allowing non-profit, co-op and social housing in RM-3 and RM-4 zones to be up to six storeys tall. It was a good, but cautious, step.

Next week, I’m asking council to be more ambitious in reducing barriers and deepening affordability for non-profit, co-op and social housing. I am proposing that we allow non-profit and co-op housing providers to build more homes, in more neighbourhoods, for more people who need them.

Rezoning for a non-profit typically takes a year or longer. It can add $400,000 to $800,000 to the cost of a project and require significant municipal staff time. This means limited government subsidies run out faster or housing providers cannot provide as deeply affordable rent as we need.

Reducing the cost, time and risk required to build non-profit and co-op housing will help residents and increase affordability in the new housing created. And without a profit motive, these savings are passed right along to tenants, resulting in more affordable homes for more people who need them.

It’s worth noting that even without a public hearing, the development permitting process still provides opportunities for neighbours to be heard. And under the city’s updated Tenant Relocation and Protection Policy, tenants who are displaced for non-profit housing are protected through strong housing policies that give them the right to move back into the new building at rents affordable based on their incomes and ensure they are provided with comparable housing in the interim. Community housing developments are also “speculation-free,” since they are mandated to maximize affordability and cannot be sold for profit. 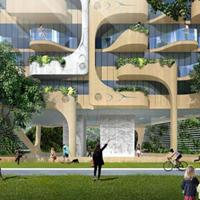 The timing is right. We are in a rare window of alignment between federal and provincial governments interested in developing affordable and non-profit housing. As a local government, we can put zoning in place that allows non-profit and co-op housing providers to access this senior government funding much more easily, speeding up timelines and achieving deeper affordability.

The Lutheran Manor would not be allowed under current zoning rules. Instead, it would require a lengthy and costly spot-rezoning and public hearing process. If a non-profit is ready to develop a piece of land, it is silly to dissuade them from building somewhat higher so they can provide more housing, especially with money from the province and federal governments on the table. That’s why I am asking that we build on last month’s vote, increasing it to allow taller buildings and expanding it elsewhere in the city.

Zoning is one of the most powerful tools that our city government has. During a housing crisis, we should be using this tool to make it easier to build more non-profit, co-op and social housing in neighbourhoods across Vancouver.