When I was in Grade 8, I enrolled in Latin 1 “because,” my mother said, “you can’t get into university without Latin.” This view was corroborated by the school guidance counsellor and the parents of all my friends. Going to university was not a matter of discussion as far as my parents were concerned.

I was not Ovid’s most avid fan or Caesar's for that matter. In fact, most of my adolescent concentration (which in retrospect strikes me as a contradiction in terms) was on Friday night. Long-term planning extended to Saturday night. From my perspective, university was as distant a prospect as landing on Mars and about as likely.

So, the following summer I found myself enrolled in Latin 1 again, and not for the love of the language. This linguistic purgatory was necessitated by the requirement that I have two years of Latin to qualify for university. I had no idea that when my mother referred to having to take Latin for admission to university it was an indeterminate sentence. Or at least it appeared that way from the vantage point of a 14-year-old. Prayer works, apparently, because I eventually passed Latin 2.

Latin is no longer required for admission to university. Its place was usurped by mathematics much like the invasion of Rome by the barbarians. In other words, mathematics has become the arbiter of those worthy of attending university. In British Columbia, for example, a student seeking undergraduate admissions to arts is required to have taken Pre-Calculus 11 or Foundations of Mathematics 12.

Increasingly, however, mathematics’ vaunted status and utility are being questioned. Among those dubious about mathematics is G.V. Ramanathan, a professor emeritus of... wait for it... mathematics, statistics and computer science at the University of Illinois in Chicago. To say Ramanathan is questioning mathematics is a bit of an understatement. He compares the marketing of mathematics to “the marketing of creams to whiten teeth, gels to grow hair and regimens to build a beautiful body.”

In an opinion piece in the Washington Post, Ramanathan asks, “How much math do we really need?” He says we should be asking ourselves that question of the next ten people we encounter — such as “your plumber, your lawyer, your grocer, your mechanic, your physician or even a math teacher.” Ouch!

Ramanathan is just one of the increasing number of academics asking us to think about how much math we really need and, by extension, how much emphasis should be placed on mathematics in school. Andrew Hacker, a professor of political science at Queens College, City University of New York, was interviewed by a New York Times journalist for a 2016 article titled “Who Needs Advanced Math? Not Everybody.”

Hacker comes at the issue from a slightly different direction than Ramanathan. He said:

“At the very time we should be honing and sharpening quantitative reasoning skills we punch students into algebra, geometry, calculus. The Math People take over and ignore much simpler needs. Arithmetic is super essential — we quantify everything.”

Hacker’s piece in the Times is a teaser for his entertaining book The Math Myth: And Other STEM Delusions. Hacker and James Tanton, who is mathematician-at-large of the Mathematical Association of America, debated one another at the U.S. National Museum of Mathematics before an audience of mathematicians, an account of which was reported in the New Yorker. 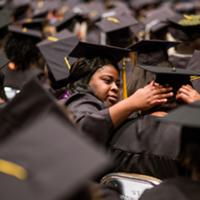 Is Education a Waste of Time and Money?

During his presentation Tanton confessed, “I have never used the quadratic formula in my personal life. I don’t think I have ever used it in my research life. But learning the formula wasn’t the point. It was the story of quadratics. And, from that story, I know I can nut my way from most any problem to do with that subject.” He seemed to be making Hacker’s point:

Time in school is limited. There is much more of value to be learned than can be accommodated in that limited time. Ramanathan, Hacker and others ask us to consider how much of that time should be devoted to mathematics. Is mathematics the new Latin?