New COVID restrictions have finally arrived in B.C. It makes sense to have them, as cases across the province have risen exponentially over the past few weeks. Nobody wants a major spike as the weather begins to warm.

But Premier John Horgan also used the announcement as an opportunity to single out young people, who have accounted for an increasing proportion of cases, to make them the collective fall guy for the rise.

“Do not blow this for the rest of us,” he said.

Young people have worked as servers, nurses, grocery clerks and delivery drivers during the pandemic. Go to a supermarket: the majority of staff, like me, are young adults and teenagers. Young people take transit to work, delivering badly needed dollars to cash-strapped transit systems in Vancouver and Victoria.

Blaming us for the rise in cases was a slap in the face.

This isn’t the first time that a Canadian leader has pointed the finger at a group of people to blame them for a spike in COVID-19 cases. Late last year, Alberta Premier Jason Kenney suggested that large family gatherings were responsible for a rise in cases amongst Calgary’s South Asian community; in February, enforcement officers were sent out in force in Whistler to “crack down” on après-ski parties. Much like with youth in B.C., some critics pointed to working conditions, rather than mere socializing, as a factor in some of the rising cases.

Horgan backtracked slightly on Twitter after many young people expressed their shock at being scapegoated, but the damage was done.

While Horgan noted that young people had made “tremendous sacrifices” and were often “working frontline jobs or living with roommates,” he also stood by his initial comments.

“I don’t make any apologies,” he said.

Even as young people disproportionately risk their health working in the pandemic, we’re still the bad guys in the eyes of the B.C. government.

Instead of taking accountability for its own choices, the B.C. government has scapegoated us. It says the blame doesn’t lie with Horgan’s own government, which may have waited too long to implement new restrictions, like putting an end to indoor dining, indoor gym sessions and indoor faith gatherings — it was reckless young hooligans. 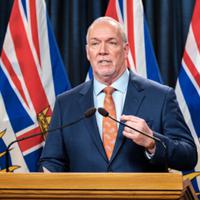 BC Locks Down Again as COVID-19 Threat Grows

COVID cases were rising in B.C. last fall when Horgan called a snap election. Back then, young people weren’t to blame for new cases, because Horgan wanted their votes. He campaigned on issues that matter to us, like housing and subsidized university. An Ipsos poll released ahead of the election, on Oct. 23, showed the NDP winning just under 49 per cent of the vote share among British Columbians aged 18 to 34. It worked: Horgan got his majority government.

Now that the BC NDP has a firmer grip on power, Horgan doesn’t need the support of young people anymore. There is no cost for him to cast us aside — there won’t be another provincial election for years.

A group of renters saddled with enormous levels of student debt has no real voice in politics. We have no real student lobby, and no resources to create one. Though we’re the ones most often working on the frontlines — making and delivering food, asking people to please wear masks at our retail jobs — we’re an easy target for politicians like Horgan, and we always will be.