In the 1970s, the city established the False Creek South Neighbourhood Association to help steward the district that extends from Cambie to Burrard Bridge, north of Sixth Avenue, and includes the 80 acres of land leased from the city. The FCSNA is an elected body with representatives from most of the neighbourhood’s stratas and co-ops.

In 2011, the FCSNA anticipated the deadline of land lease expiry (generally in the 2030s but with some expiring this year) and sought solutions to the burgeoning affordability crisis by creating its RePlan Committee to show how neighbourhoods could “refresh.”

In 2012, city council unanimously instructed staff to work with RePlan on addressing the leases and planning the long-term future of the community. Hundreds of citizens including city staff came to sessions.

In 2018, the city tabled two tangible policy actions. But city progress stalled on key work streams of land governance and land lease renewal. To allow focus on lease renewal, the city’s planning process was put on hold by mutual agreement with the FCSNA.

In 2019, after another year of inaction and silence from the city, RePlan opted to move ahead on its own initiative. RePlan’s fall 2019 co-design work proposes over a million square feet of new housing using best city making practices.

Now RePlan seeks to engage with First Nations and neighbours such as Fairview and plug into the Broadway and citywide planning processes.

The False Creek South neighbourhood of Vancouver is for a few reasons rare — and endangered, residents increasingly fear.

One reason False Creek South is far from the norm is the city owns most of the land and leases it to residents. Tensions have mounted as residents have waited (and waited and waited) to learn the terms of impending lease renewals.

Another rare experience for those who live in False Creek South is the long stretch of time they’ve acted in good faith with the city to decide how best to redevelop their neighbourhood in keeping with its original principles of affordability and liveability. That consultation has now spanned more than a decade.

Now there’s a new reason to consider False Creek South an exception to the rule in Vancouver — an online survey.

It’s highly unusual that city hall would survey all the citizens of Vancouver about what to do in a single neighbourhood, particularly when that community has been actively engaged in its own planning. But that’s what’s going on this month. The polling of views began Feb. 1 and closes on Feb. 28. How reliable the survey will prove to be is unknown. One of us punched in the postal code for Toronto city hall and was allowed to take it, raising questions about whether the survey can be gamed.

But why was it launched in the first place? Residents worry this is part of an effort to prepare the way for a tower-intensive plan for the neighbourhood pushed by density advocates, which would generate maximum new wealth to the city’s coffers.

It’s not like residents of False Creek South are anti-density. They’ve already crafted their own proposal that invites the city to approve over a million square feet of new housing in their own backyard — and that plan is what we want to share with you today.

One of the writers of this piece is architect Graham McGarva, who has designed his share of towers. He speaks for fellow residents in saying “We’re DIMBYs (Density In My Backyard).” But this article — co-authored also by a former long-time planner for the City of Vancouver — proposes a “Goldilocks” approach (not too much, not too little) to densifying False Creek South, an evolution that respects the origins of the neighbourhood and is born of over a year of consultation with RePlan, a group mostly made up of long-standing False Creek South residents.

RePlan’s proposal, laid out in a presentation here, is based on the principles unanimously adopted by city council after a well-run and inclusive yearlong process led by the planning department, with considerable involvement from real estate services and the city manager’s office.

As we’ve noted, the RePlan approach envisions a False Creek South neighbourhood with more than a million square feet of new housing opportunity. Our initial focus is to locate density on fallow sites that enable early build out of high-priority housing for new residents. These occur typically near the bridgeheads and are imagined as compact clusters of dense buildings that are mindful of upland views from Fairview Slopes.

To complement these more obvious locations for greater density, we developed a companion, more incremental, approach for the remaining lands including previously underdeveloped areas, and increasing residential capacity within the historic community enclaves.

The RePlan approach would introduce multiple housing types, including refreshing and densifying the historic community enclaves that make False Creek South a distinguished precedent for creating urban communities. We have never been interested in wanting to “freeze” the area, rather we want to expand opportunities for others.

The RePlan approach includes a 300,000-square-feet Campus of Care to be developed as an outgrowth of our existing Broadway Lodge seniors care facility and nearby housing for people with disabilities and who have experienced homelessness. The campus will provide long-term care in a more homelike setting and integrate services for older adults living in their own homes.

Adjacent to the Campus of Care, we envision an Intergenerational Hub that brings together a range of new housing, including co-ops, rentals and possibly affordable home ownership, with a focus on diverse and integrated homes for seniors and families. Co-locating will enhance the shared experience of children and elders on a daily basis. The need for workforce housing, with a special focus on essential housing for essential service workers, is another important contribution of our plan.

Here is how the Campus of Care and Intergenerational Hub could look:

A substantial portion of this much-needed housing could be started immediately. Our community has worked for many years toward the vision above that received consensus support at all of our workshops, and two well-attended community meetings held in January 2020. The city is well aware of our efforts. We have done all they have asked of us. The current survey therefore was a head-scratching surprise.

Because this has taken much too long, the residents have proactively been seeking partnerships with provincial government ministries about how we might best move forward on the first phase of our plan, the Campus of Care. If the City of Vancouver were to clearly signal its interest in exploring this creation of new housing for over 600 people, at little cost to the city, that could advance the conversations that are happening in the halls of senior government and perhaps initiate this exciting first phase of our larger plan.

Some boosters of much higher density for False Creek South are urging that city hall emulate Senakw, the cluster of towers planned by Westbank in partnership with the Squamish Nation that owns lands next door to False Creek South. Our plan, much less tower-intensive, nevertheless: 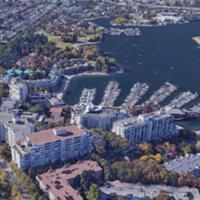 We are proud of our work. It has taken thousands of volunteer hours to get this far (see sidebar for a brief history of the journey). Our proposal recognizes that False Creek South must be shared with others. We believe we have a thoughtful proposal that addresses multiple interests in a careful way. We remain mindful, and respectful, that we are proposing the transformation of taxpayer-owned assets.

The RePlan proposal shared here achieved consensus among residents in just a few months. We attribute this to honourable and creative engagement where all participants contributed insight and aspiration. We took the time to find a thoughtful balance of all interests while ensuring that views, shadowing, livability and neighbourliness of existing and future residents will be respected.

We hope that other communities appreciate our efforts to chart an expanded and inclusive future, and the tenacity and perseverance necessary to navigate the public process challenges we have experienced.