This week, the Vancouver Sun ran an article by Dan Fumano that referenced a widely read piece by this author. Fumano’s article drew attention to the anxieties of many False Creek South residents over the future of their homes. In it, Vancouver Mayor Kennedy Stewart implies that I stated the city would be selling off the land. It would be helpful if he read the text of my piece.

If he did, he would see that I do not say anywhere in the article that the land will or may be sold. Indeed, Kathryn Woodward, False Creek South resident, contacted me about this issue and later published in the False Creek South residents’ association newsletter that "Mr. Condon answered me that nowhere in the article does he say there will be a sell-off and he is right."

The concern I did raise, however, keyed off this stated objective of the city: "Plan with a fiscally responsible approach for the long-term health and sustainability of the City’s Property Endowment Fund." This requirement has raised alarms with many residents who have long known that those overseeing the real estate endowment fund of the city have used a market-based methodology to assess land value, at the expense of the more socially-focused approach behind the original project. Therein lies the root of the conflict.

The headline of the piece, therefore, referred not to selling off the land per se, but rather to the potential for the city to value, at current market prices, the land beneath the current housing and build higher-density, market-based housing in order to flow substantial revenue into the City’s Property Endowment Fund. If the city were to do that, South False Creek would be significantly redeveloped, albeit on city-owned land, to deliver profits to developers and tax and sales revenues to city hall.

In short, I worried aloud that the city was poised to sell off the social potential of the site on the altar of the same kind of market-based analysis that is clearly killing this city.

In any case, this kerfuffle does allow us to ask the mayor to answer a few questions about False Creek South, and to address broader issues relevant to the future of affordable non-market housing in Vancouver. Here is his opportunity to provide answers that may, hopefully, be calming in their details.

Question one. Given the obvious level of anxiety among residents of False Creek South, why have you not met with them since you were elected?

Their frustration is palpable, understandable for anyone who had made a life in an area and wanted only some assurance that it might continue. Will there be a reason to expect clarity on this issue this year?

Question two. What form of housing will be added to the mix at False Creek South?

The district is a worldwide model for mixed-income housing, with one-third for the poor elderly or disabled, one-third middle class (mostly co-ops), one-third higher income (mostly market condominiums on leased land). Will this be the formula for future expansion?

It is clear that all residents would welcome new neighbours, but it is equally clear that they hope that the socially equitable model so basic to the community will be maintained. So far, they have not been assured that the less equitable and affordable urban design model so obvious on the north shore of False Creek will not be replicated on the south. 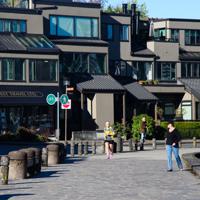 Question three. What does the fate of False Creek South imply for non-market housing more generally?

As the housing crisis rages, this author and others in this city have argued that the percentage of non-market housing in this city should increase, not decrease. Can we be sure that this will be the case?

Mayor Stewart, it was good to read your quote: "I would say South False Creek has been a global showcase for the co-op model, and it needs to continue and expand." This is, I believe, the first full-throated support of the non-market housing concept from your office to date.

Can residents hope that the False Creek South model can be expanded and indeed promoted in other parts of the city as well?

As I wrote in my previous piece: "Making a priority of plumping the Property Endowment Fund necessarily involves not preserving what was created decades ago, but estimating current land values around False Creek. Based on those values, the lands under South False Creek co-ops, social housing and land-trust condominiums are worth billions."

What can Mayor Stewart and his officials tell us specifically about how Vancouver intends to reap those billions in value while tackling the city’s affordable housing crisis?