Faced with a real crisis — a deadly pandemic that won’t quit when you yell at it to knock it off — Alberta’s United Conservative Party government apparently has no idea what to do.

COVID-19 is out of control. Alberta hospitals and care facilities are in near chaos. And the UCP government is paralyzed, afraid to speak the word “lockdown” out loud, let alone impose one.

Half-hearted, voluntary measures are all the UCP dares to take.

A couple of weeks ago Conservative MLAs were mocking Ottawa’s COVID Alert app as the “Trudeau tracing app.” Two weeks later they were telling Albertans they were going to have to do their own contract tracing. Now they just look like a deer in the headlights.

Alberta Premier Jason Kenney, the Restoration Conservative who was supposed to Make Alberta Great Again, is in COVID isolation — again. All citizens get is a confident sounding but factually-impaired voice over a telephone line.

Pay no attention to that man behind the curtain!

Kenney was terrific at dealing with fake emergencies like that conspiracy by the Rockefellers to ruin the Athabasca oilsands.

His approach worked superbly. In 2019 it overcame the desperate final dash by former NDP premier Rachel Notley, who now bravely soldiers on as the leader of the Opposition.

But Kenney turns out to be no good at all dealing with a real crisis.

He ticked all the boxes for a lot of voters. He said all the right things. But the man’s simply not up to the task. He’s even making Ontario Premier Doug Ford look good! And there’s no one in his caucus able, capable or brave enough to take over until the crisis passes.

As of Friday, we don’t have a clue about the source of 65 per cent of the cases in Alberta.

Meanwhile, Mr. Laser-Focused-on-the-Economy — who hasn’t performed too well on that file either, come to think of it — can’t seem to get his mind off the problem he’s interested in to focus on the one that’s killed almost 400 Albertans and sickened nearly 40,000.

Metaphors like “fiddling while Rome burns” and “shuffling the deck chairs on the Titanic” were made for this guy.

How bad is it?

The Conservatives’ planned health-care cuts have worsened the staffing crisis in Alberta hospitals while the pandemic’s toll increased. It’s now so bad Alberta Health is giving up the single-site order for workers it implemented to prevent the spread of COVID-19 among nursing homes.

The Alberta Union of Provincial Employees got its hands on an Alberta Health document that shows nine continuing care sites were given exemptions in a single week to allow them to have employees who worked in multiple locations, increasing the risk of COVID-19 transmission to vulnerable residents.

“Continuing care operators are abandoning this rule because they cannot find enough workers to care for the residents,” said AUPE vice-president Susan Slade. “Employers are begging our members to work at second sites to relieve the staffing crisis created by so many workers getting infected or having to isolate.”

“They are being told they can move between sites with outbreaks and without outbreaks if they are not symptomatic, even though we know that the virus can be spread by people without symptoms,” she said.

Will we now have more?

Meanwhile, hospitals in Calgary and Edmonton are reported to be at 120 per cent capacity and doctors are warning that every hospital in the province could be out of ICU space within two weeks.

On Friday, chief medical health officer Deena Hinshaw shortened the quarantine time for health-care workers who test positive for the virus to 10 from 14 days — the reason, again, is obviously the need to alleviate staff shortages.

The premier — ever focused on the need to keeps the bars open — assures Albertans there are plenty of beds in the system if we need them. He must have forgotten that you need doctors, nurses and other health-care workers to treat people in those beds.

And it doesn’t seem to have occurred to him that if we completely lose control of the virus, that bodes no good for the economy. 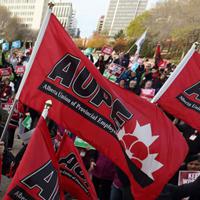 He was warned, many times, that voluntary measures wouldn’t work. He ignored that advice, which has now proved right. He continues to ignore it. All the misleading tweets from all of the UCP issues managers in all of the world aren’t going to fix this mess.

Notley might have stood a chance of changing the government’s course, but she’s only the leader of the Opposition — no position from which to pitch in and get things working again.

It sure looks as if it will take an intervention by the federal government to fix this.

Then we’ll have to listen to the United Conservative Party blaming Prime Minister Justin Trudeau for the mess Kenney has created.

But that’s still better than what Albertans will have to deal with if Ottawa doesn’t step in.