As he came in, so too does Donald Trump look to be leaving — in a hail of lies and nation-wrecking threats.

True, the final tally is not in on the 2020 presidential race, so it is possible Trump can pull it out in a squeaker. But the electoral map is tilting ever so slightly in Joe Biden’s favour, and the president appears to know it.

How else to explain his weird rant in the middle of night?

That the Democrats were stealing the election.

That all voting should stop in states where he is ahead, but continue where he trails.

That he is about to set the legal hounds loose and take a “crooked” election to the Supreme Court, which he has stocked like his personal trout pond.

And incredibly, that he has already won the election.

Voter suppression is ugly enough. Voter disenfranchisement by the millions coming from a sitting president is a pure abomination.

Like a variation on Samuel Beckett’s Waiting for Godot, the world is Waiting for Pennsylvania to know for certain who will be the next president of the United States. But no one has to wait until Friday to pick through the stack of losers from this election.

The biggest loser was America itself. The Divided States of America is now a reality. Trump speaks for half of the country, and Biden speaks for the other half. And Americans seem to know it is a house put asunder by mutually exclusive ideologies.

That’s why businesses in New York boarded up their windows, not for a hurricane, but for a presidential election. That’s why Trump finally built a wall — not at the southern border, but around the White House. A bad moon has risen over U.S. politics, a blood moon.

The free press also took a big hit last night. For years, heroic crews at the New York Times, the Washington Post, and networks like CNN have laboured to hold a hallucinogenic president to some vestige of evidence-based reality.

They fact checked thousands of his lies, delved into his scandalous taxes, investigated his often-sleazy private life, and pored over his racist and misogynistic tweets. The end result was basically that half of the country didn’t care. They preferred fiction with friction to the demonstrable truth.

Pollsters also had a bad night. Most of them did yet another face plant, apparently learning nothing from the debacle of the 2016 presidential polls.

They totally missed Trump’s deep support in certain parts of the country, particularly in the Rust Belt and the Midwest. The large leads Biden held in most national and state polls evaporated on election night.

Why does this matter? Because the networks reported these polls as news, and now Trump can say that they were putting out fake news. That degrades one of the seminal freedoms of democracy. For a norm-breaking iconoclast like Trump, that is pure gold.

It was also a terrible night for Americans of colour. Black Lives Matter, but apparently far less than one would have hoped after the police slaying of Black men like George Floyd. CNN contributor Van Jones nailed it when he said that the fact that the election was so close “hurt.”

What did he mean? It hurt because it could only mean that America’s elusive hunt for racial equality is a long way from ending like a Disney movie. It hurt because a president’s dog-whistle racism proved as persuasive as justice for all.

Serious damage was also inflicted last night on scientists like Dr. Anthony Fauci. For months the scientific community has tried to mitigate the dreadful toll that COVID-19 has taken on Americans, approaching a quarter of a million deaths in just eight months.

Fauci and his colleagues begged for testing and hand washing and social distancing. They said over and over again that masks saved lives. The president of the U.S. made clear that in his opinion masks were for the Lone Ranger and Biden. 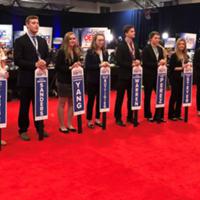 I Watched Americans Try to Pick Their Trump Slayer. Yikes

Despite the pandemic raging in states like Wisconsin, half of Americans bought into the president’s delusional dismissiveness, nicely captured in his absurd statement that the country had turned the corner and the pandemic would soon be over. That is a five-Pinocchio whopper with current modelling predicting that the death toll could hit 400,000 in just a few months.

As of now, the U.S. Senate is also a casualty of the ideological gridlock gripping the country. Despite Mitch McConnell’s disgraceful conduct during the president’s impeachment trial, where Republican jurors didn’t want to hear evidence against Trump, McConnell won re-election in Kentucky. So too did his colleague Lindsey Graham in South Carolina, who once vowed never to install a new Supreme Court Justice close to an election, and then put one in after Americans had already begun voting.

If the Senate race, which is currently tied at 47 seats apiece, with six undecided, should go to the Republicans, and the House of Representatives remains Democrat, Biden would have a tough time getting much done if he should win in the end. If Trump should win, the Senate will continue to be the rubber stamp for the Executive Branch. So much for separation of powers and the constitution.

Election 2020 is in danger of becoming the “no good scenario” election. If Trump wins, then America becomes Trumpland, a place where the top banana would make the Wizard of Oz look like an amateur. Four more long, dark years of government by a narcissistic plutocrat with delusions of grandeur.

But a narrow Biden victory hardly provides deliverance for this dysfunctional country. If Trump makes good on his claim to “send in the lawyers” to challenge the results should he lose the election, should he use what remains of his bully pulpit to claim that dark forces stole the vote, should he take the fight all the way to the Supreme Court, all hell could break loose in America.

A job for the Proud Boys, standing by, as beckoned by the Divider-in-Chief.