Alberta has proven, in this era of eroding accountability, that it really is no big deal to piss away billions of dollars belonging to someone else.

In fact, if more than $2 billion in value is drained from pension funds and the Alberta Heritage Savings Trust Fund due to risky investments, you might as well as grab a cigar and blow smoke rings that spell two words.

That’s how the whole calamity was passed off in a letter by Kevin Uebelein, CEO of Alberta Investment Management Co., responsible for safely managing the billions in question.

With so many savings gone missing, it’s hard to know which losses to examine first.

The hit to pensions

Let’s start with AIMCo’s pathetic seven-page account of how it lost $2.1 billion belonging to its 31 clients, including a collection of public sector pension funds for health-care workers, judges, cops and other public workers.

The document doesn’t name an author. It reads like something produced by the Communist Party of China. The language is so stilted that most pensioners might want to hire a translator.

Consider this opaque gem: “The degree of challenge from the first and second lines of defense (Investment and Risk Management, respectively) regarding the VOLTS strategy was unsatisfactory.”

The anonymously produced document claims that AIMCo’s board of directors carried out “a fulsome review” of the loss with the help of KPMG and other parties.

The review identified a problem with a Volatility Trading Strategy in operation since 2013. (Volatility trading has proven to be a modern version of toxic subprime mortgages.)

VOLTS was just one of 52 “value added or alpha strategies” operated by the geniuses at AIMCo to generate revenue for its pension clients.

The report says that AIMCo ramped up the size and scope of VOLTS in 2018 but doesn’t explain why.

COVID-19 then shook up the markets, and the agency’s volatility strategy couldn’t handle the volatility because nobody at AIMCo had really tested the “the risk of an investment like VOLTS and its potential for unacceptable losses.” Oh, boy.

So VOLTS delivered a jolt. Or as senior management later characterized the calamity at a polite public hearing, “a learning experience.”

Standards have indeed fallen: in the old days losing $2 billion was a firing experience.

In any case, some anonymous group at AIMCo, known as Risk Management, belatedly performed a test on VOLTS and called attention to its excessive risks in January 2020. But by the time AIMCO managers acted to “reduce VOLTS exposure in early March, it was too late.”

The report does not explain to unsatisfied clients why executive vice president of public equities Peter Pontikes and David Triska, a portfolio manager, are no longer with the company.

Nor does it say why CEO Uebelein should still have a job with annual compensation of $2 million. Ditto for the board of directors.

Nor does the document explain why AIMCo appointed Mark Wiseman as board director and chair of its board of directors this month. According to the Wall Street Journal, Wiseman was ousted from BlackRock Inc., a big New York money firm, for violating its rules in December 2019. The company requires its employees to disclose romantic relationships with direct subordinates or other colleagues. Wiseman didn’t follow the code and was shown the door. His wife of 23 years, who didn’t break any rules, remains the head of BlackRock’s Canadian business. (Question: Did AIMCo try to hire her instead?)

But hardworking pensioners shouldn’t worry very much, because AIMCo’s top bosses “will take a personal leadership role in ensuring that the integration between Risk Management and investment management staff continues to mature towards a more collaborative, inclusive relationship.”

Once you cut through that bafflegab, shouldn’t incorporating risk in the investment process be expected of any rigorously managed fund?

Brett Friedman, a managing partner of Winhall Risk Analytics, parsed the document and found it, well, wholly unsatisfactory. He noted it didn’t address several key questions including these obvious ones:

“Why was the VOLTS strategy ramped up in terms of risk and complexity in January 2018?

Why was Risk sounding the alarm in 2020, seven years after the strategy began and two years after its ramp-up?”

But what really galls Freidman is this glaring omission:

“There is no discussion as to whether these strategies are suitable for a pension fund, however well managed and whatever the size.”

Freidman makes one more critical point: “The loss, etc., betrays bad judgement and a host of other issues. I would argue that short volatility positions are never appropriate for a pension, never ever — the risk/reward just isn’t there.”

Alberta pensioners might want to pepper their MLAs with these accountability questions. But in dysfunctional Alberta, they might die waiting for answers.

The hit to Albertans’ own ‘nest egg’

Last year the rainy day fund, Alberta’s “nest egg” created with oil revenues from the 1970s and 1980s, was worth $18.2 billion. From February to end of March it dropped to just $16.3 billion, its lowest value in 10 years. Part of the loss was because more than $1 billion was transferred into the province’s general fund. But buried on page 12 of the fund’s annual report, updated July 13, is this revelation:

“A volatility strategy was also a major factor in the underperformance. This strategy caused the Fund to lose $411 million and reduced Fund returns by 2.2 per cent.”

And how did Travis Toews, minister of finance, greet this “underperformance?”

Chill, people. “Responsible long-term investing requires patience and I believe better years for the fund, and for our province as a whole, are ahead.”

Sounding a lot like AIMCo’s senior managers, Toews said it had been a difficult year because of the pandemic, which sure made things… volatile.

Toews didn’t comment on the fact that the province paid $153 million in fees to AIMCo and other third parties only to see them lose $411 million after developing, what one NDP opposition member called an “unacceptable culture of risk management within their organization.”

Nor does Toews have anything to say about the fund’s Alberta Growth Mandate, a New Democrat policy which allowed the fund to invest up to $500 million in Alberta businesses between 2015 and 2019.

Was that money safely bet on solidly upward trending industries? Nope. The fund doubled down on Alberta’s petro sector, shackled to volatile oil and gas prices.

The AGM poured the bulk of Albertans’ money into oil and gas or real estate companies in 32 separate investments. Kinder Morgan Canada, for example got $29 million. Trident Exploration Corp., which went bankrupt, got $12 million. Ikkuma Resources got $12 million. Perpetual Energy got $10 million. And so on.

What the hell does that mean?

Are taxpayers gullible enough to believe that nearly $500 million worth of investments in struggling oil and gas companies crippled by debt, burdened by large CEO salaries and hammered by low prices actually enriched the fund? 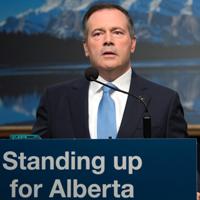 Bob Ascah, the former director of the Institute for Public Economics at the University of Alberta, put together 11 questions about this less-than-transparent accounting including this kicker: “Who did the independent analysis to substantiate the claim that ‘all investments exceeded Aimco’s risk/return targets?’”

But will Albertans ask the question, let alone get an answer? Probably not.

Nicholas Nassim Taleb, North America’s great philosopher of risk, has long argued that wise and prudent investors must understand the dangers of volatility. He even has a word for it: antifragile.

“When you wake up in the morning, you need to be protected from mistakes in order to survive,” he explains. “You also need to be positioned in a way that if you lose, you lose small. And if you make money, you make it big — at least bigger than what you would lose.”

Based on AIMCo’s document and the government’s report on the rainy-day fund, the Alberta government, a cultivator of fragility, has no idea how to deal with volatility other than losing big.

Losers, in other words, are running the province. They vow to continue to invest more of other people’s money in oil and gas projects. Will the returns continue to be “unsatisfactory” or perhaps even “wholly unsatisfactory?” To find out, Albertans must be patient.