Andrew Scheer’s resignation as leader of the Conservatives came after months of speculation and mounting frustration inside and outside his party.

Scheer’s critics cite a variety of reasons for why he was unable to beat Justin Trudeau in the last election, such as his lack of transparency about his dual citizenship and his claims about working as an insurance broker.

But the reason critics cite most often is Scheer’s social conservatism which, as former Conservative cabinet minister Peter MacKay put it, hung around his neck like a “stinking albatross.”

Media commentators have suggested that if the Conservatives hope to win the next election, they must elect a leader who is capable of communicating a more convincingly centrist position on issues such as abortion and LGBTQ rights.

The commentators may well be correct, but their focus on Scheer’s political beliefs — rather than on those of his newly elected caucus members — gives the impression that the party’s problem with social conservatism begins and ends with him.

For example, Campaign Life Coalition — Canada’s biggest anti-abortion group — says that 46 out of the 121-member Conservative caucus are pro-life, which amounts to almost 40 per cent of the party’s sitting MPs.

Anti-abortion voters tend to differ from pro-choice voters when it comes to their views on the status of women, according to the survey.

What do these statistics say in the context of the Conservative Party of Canada?

Given that being against abortion tends to be strongly associated with being inegalitarian, the significant number of anti-abortion MPs in the Conservative caucus should be cause for concern.

It should also indicate that the party’s problem with its radical right wing will not be solved solely by electing a new leader.

The problem is at the very centre of the party, not its margins, and will not be solved over the course of one election cycle. An entirely new approach is required, one that must champion social justice for all and take aggressive action on climate change.

Neither of these things will be possible unless the party makes fundamental changes to how it conceives of itself, its members and its political operatives.

Scheer not out of step with his party

On both federal and provincial levels, Canada’s Conservatives seem unlikely to make these changes any time soon. Regardless of who replaces Scheer, the most public faces of conservatism in the country are unambiguously aligned with the radical right. 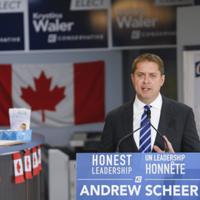 Scheer Wants You to Think Abortion Access Would Be Protected If He Wins. It Wouldn’t

In Ontario, Doug Ford has made headlines for being photographed with far-right activist Faith Goldy as well as for his rollback of the sex ed curriculum, his ongoing association with evangelical leader Charles McVety and his private meetings with controversial public speaker Jordan Peterson.

In Alberta, Jason Kenney has promised to remove “political agendas” from social studies through his party’s curriculum review, has been praised by groups with social conservative values for his “100 per cent voting record on pro-life and pro-family issues” and has invested $30 million in an energy war room aimed at undermining critics of the oil industry.

Scheer may have lacked the strategic ability to keep his views from causing him problems on the campaign trail. But his beliefs are not out of step with those of the party he represents.

So if the party wants to shed the social conservatism label, it has to do more than just replace him. It has to completely transform itself.