Every three years, the Organization for Economic Co-operation and Development conducts a worldwide exam for 15-year-olds: the Programme for International Student Assessment, better known as PISA. Six hundred thousand kids in scores of countries show their skills in reading, math and science.

The results trigger worldwide reactions as educators and politicians brag about, or bewail, their students' scores.

This has been a regular event ever since the first PISA results came out in 2000 and we learned that quiet little Finland had beaten the world. Even the Finns were surprised, but also enterprising: selling Finnish educational principles to other countries has since become a thriving export industry. And PISA has become a generally accepted means of judging student ability, with no bias toward one nation or another.

The world leaders in 2018? Top spot goes to an unlikely patchwork of Beijing, Shanghai and the provinces of Jiangsu and Zhejiang. Singapore is second, then Macau and Hong Kong, followed by Estonia just ahead of Canada. The U.S. (13) and U.K. (14) follow.

When we look at Canada's results, we see we're well above the average reading score and bit above average in math and science — but both are with a “negative trend,” meaning our performance has fallen off from earlier tests.

Compared to the Finns, we're doing slightly better in reading. But we and the Finns are steadily declining in math and science, as the proportion of top-performing students has fallen over the years.

PISA also offers a Canadian country snapshot with more detailed analysis: 15 per cent of our kids were top performers in reading, reaching levels five or six, but 14 per cent couldn't even make level two, considered very low. Roughly the same percentages apply to top and bottom performers in math and science. The results suggest we're not doing enough to help all students succeed.

It's encouraging to see that the gap in scores between socially advantaged and disadvantaged students was narrower in Canada than the OECD average. “Some 14 per cent of disadvantaged students in Canada were able to score in the top quarter of reading performance within Canada,” the snapshot says, “indicating that disadvantage is not destiny.” The same was true of immigrants, who now make up over one-third of Canadian students.

But one factor appears universal in PISA 2018.

“Socioeconomic status was a strong predictor of performance in mathematics and science in all PISA participating countries,” the report said. Students from socioeconomically advantaged families in general did better in reading as well.

This was true even in egalitarian Finland. A Finnish news agency reported a gap in reading levels between richest and poorest students equivalent to two years' schooling. The rich kids are doing OK, but the poor kids are falling behind. 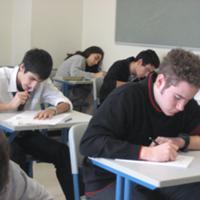 The snapshot goes on to say, “In all countries and economies that participated in PISA 2018, girls significantly outperformed boys in reading, by 30 score points on average across OECD countries. In Canada, the gender gap in reading (29 score points) was not significantly different from the average gap. The gap was similar to that observed in 2009 (34 score points), and both boys' and girls' performance remained stable over the period.” Schools worldwide have been stumped for decades by their inability to improve boys' reading skills.

PISA results seem likely to fuel political and educational debates for another three years, even within Canada. B.C. students' PISA reading score came in at 519, close to the Canadian average of 520. Alberta students, meanwhile, scored 532, the best in the country. (In 2015, B.C. scored 536, best in the world.)

Yet Jason Kenney's government is cutting Alberta's education budget by an estimated $275 million — a classic case of “fixing” what ain't broke.

Amid all the political uproar, some educators and politicians and civil servants will sit down, mull over their country's PISA results, and try to find a way to improve the 2021 scores of kids who are now 12. Some will succeed. Some may even get boys to read more and better.

But as long as some kids grow up rich, and some grow up poor, the rich kids will always do better.