Now that we can open the windows again and clear the air of political flatulence, perhaps we can acknowledge the realities that remain like ghosts in our troubled house.

Once again we have been reminded that Canada’s political parties behave like organizations “publicly and officially designed for the purpose of killing in all souls the sense of truth and of justice,” as Simone Weil characterized parties seven decades ago.

What they have left us are political divisions that have now painted the face of Canada red or blue.

And just as in the excited United States, the conservative blue largely spreads across oil-producing regions suffering from low prices, while the red occupies oil-importing provinces.

We are now living the storm before the storm and don’t even know it.

The energy divisions in both countries tell a story of appalling leadership, the strength of propaganda and political inertia.

One-third of the blue nation not only doesn’t believe that climate change is an emergency, but remains in denial about the increasing volatility of oil and gas prices.

Low prices and overproduction of high cost bitumen and fracked oil and gas have eroded the economics of the fossil fuel industry, throwing some people in Alberta and Saskatchewan into cauldrons of resentment, stoked by the propaganda manufactured by “wildcat Christians” and the oil industry.

Darren Dochuk, an Edmonton-born history professor at the University of Notre Dame, brilliantly explained in his book Anointed with Oil that places like Texas, Saudi Arabia and Oklahoma have interpreted the extraction of fossil fuels as an act of divine providence. They are God’s people.

“The relationship between religion and oil is ideological, theological and institutional and has major political consequences,” noted Dochuk in a recent talk.

Canada is living those extreme consequences — as is Trump’s America — because it never had a national debate about how much heavy oil to export, to whom, and at what price. And the relationship between religion and oil is as strong here.

Andrew Scheer, a conservative Catholic, offered a rehashed version of Stephen Harper’s oil evangelism, based on deregulating the fossil fuel industry, demonizing environmentalists and promoting a Matthew Effect social agenda: let those who have more already earn even more.

Canada’s petroleum evangelicals now wrap themselves in the flag and demand that we drill more with fewer regulations, even though the market is oversupplied and the climate has reached a tipping point.

Conservation and reduced energy use are ignored. The new fossil fuel apostles adopt Ronald Reagan’s approach when he launched his presidential campaign in 1979.

“It is no program simply to say ‘use less energy,’” Reagan said, instead promising to strip away all regulations that got in the way of oil and gas production.

Only religious fervour allows people to blindly ignore the economics of supply and demand as well as the aging nature of the west’s hydrocarbon bounty. And it takes religious fervour for Alberta’s oil and gas cult to ignore the red elephant in the room — $260 billion worth of leaking wells, pipelines and old gas plants that need to be cleaned up.

Alberta has no plan or committed funding to deal with this economically crushing liability other than sweeping the mess under the carpet.

The province’s biblical ardour makes it hard for the rest of Canada to understand the incessant hand-wringing and complaining in a province that has failed to collect royalties that would have given citizens fair payment for oil and gas resources; failed to save for a rainy day; and failed to manage its resources wisely.

Albertans aren’t alone. Across Canada, about one-third of voters apparently believe that we can build pipelines and LNG plants and still somehow fight climate change. And not just Conservatives — this bunch includes federal Liberals and BC New Democrats.

The Liberals think they can twin an uneconomic bitumen pipeline largely for Chinese markets and somehow battle climate change. Conservatives may be anointed by oil but Liberals are anointed by rank dishonesty.

The Liberals (and the BC NDP) also think they can subsidize liquified natural gas plants and still claim they’re fighting climate change by supplying $680-million subsidies to electrify fracking operations in B.C.’s northeast.

And the B.C. government thinks it can build an over-budget dam at Site C to provide electricity to fracking operations and LNG plants, despite the tremendous costs and risks for working British Columbians.

The proponents of these developments are acting, as Greta Thunberg describes it, like “spoiled irresponsible children.”

Another third of the nation, including the Bloc Québécois, says we can fight climate change by powering down the economy by at least 30 per cent — and claims we can still maintain or increase spending on social services.

That too is based on near religious belief, because the numbers don’t add up. How can you slash the use of fossil fuels — which drive our economic Ponzi schemes — and expect more services?

The reality of the physics is not comfortable.

We have used fossil fuels to support a global population that is at least eight times above any sustainable level.

In the last 150 years we have deployed hydrocarbons to construct a highly complex economic system that is consuming all life, respects no limits and is poised for collapse. It has one religious mantra: technology, the source of maniacal complexity, will save us.

Roger Pielke Jr., a Colorado academic, recently calculated what would be needed if governments really wanted to go to “carbon-free energy” by 2050. He found that if wind farms were the chosen solution, we’d need to build and deploy 1,500 wind turbines on about 300 square miles every day for the next 30 years.

You can’t build a windmill without spending fossil fuels, and the average lifespan of a windmill is about 25 years. Renewables are really rebuildables dependent on fossil fuels.

Pielke’s point is not that it can’t be done, but that our delusions doom our efforts. 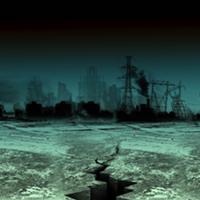 The Green New Deal Battles Business as Usual. Both Will Doom Us

So Greta Thunberg is right. We need a new kind of politics and a new way of thinking. And a new way of living. We won’t get there without co-operating and working together.

We will have to take steps back, not forward.

That’s the wisdom of a Swedish teenager. Children can always see what squabbling adults can’t.

But Canada will not be leading the way anytime soon.

Our pathetic politics reflects the inertia in the fossil fuel system, the moral poverty of the status quo and a popular denial about the scale of change required to prevent an unending emergency.

We are living the storm before the storm.