As we race towards a federal election that will determine if and how Canada responds to the climate emergency, one central player is noticeably absent.

Suncor is without a doubt the biggest and most influential oilsands company in the country. Contrary to what you might think, however, it has a more aggressive position on climate action than federal Conservative Party Leader Andrew Scheer. While Scheer promises to scrap Canada’s national carbon price as soon he gets into office, Suncor argues the Liberal policy should stay.

“We have and continue to support the Pan-Canadian Framework as a path forward to reduce greenhouse gas emissions,” Nathan Maycher, Suncor’s director of climate change and sustainability integration, told The Tyee in an email.

In 2017, the company employed 12,381 people, brought in over $32 billion in revenue and produced roughly 1.2 million barrels of bitumen per day, which is over one-third of the industry’s total output, according to research from the Corporate Mapping Project.

Yet when three major oilsands producers — Canadian Natural Resources Ltd., Cenovus Energy and MEG Energy Corp. — ran an “open letter to Canadians” in 30 newspapers this July arguing that “shutting down Canada’s oil industry will have little impact on global [emissions] targets,” Suncor stayed silent. And the company’s CEO Mark Little doesn’t appear to be involved with an effort by small and mid-level Calgary oil and gas executives to get Scheer elected prime minister this October.

So when Scheer promises to “champion Canada’s energy sector,” he’s not necessarily referring to the big producers and employers such as Suncor, which says it’s in favour of policies to meet the country’s Paris climate targets.

Rather, Scheer’s most intense industry support tends to come from “uber-conservative Trumpian-philosophy-believing CEOs” who portray themselves as victims of a foreign-funded conspiracy to shut down the oilsands and occasionally question humanity’s role in climate change, says Markham Hislop, a long-time energy journalist in Alberta and publisher of the site Energi Media.

“They’re pumped up, they’ve got money, they’re going to be supporting the [Conservative party] because that’s their big win,” he said. With Scheer in power, he explained, “they can eliminate all these nasty [environmental] regulations that they don’t like.”

Whether or not Suncor is better off with a Conservative government that eviscerates climate policy is hard to say. But time is ticking down for Canada to take meaningful action on a climate already warming the country twice as fast as the rest of the world. And by refusing to publicly defend the climate policies Suncor says it supports, the company is handing over political power to executives and politicians who could lock us into catastrophe.

A common misunderstanding about Canada’s oil and gas industry is that all the companies that belong to it — big or small — face the same pressures to their business models from volatile oil prices and climate regulations. “Many Albertans just think of the oil industry as this big blob that doesn’t really have defined features,” said Ian Hussey, research manager at the Edmonton-based Parkland Institute.

The reality is much more nuanced. When Hussey explored how the industry was affected by the 2014 oil price downturn for the Corporate Mapping Project, he was surprised to learn that five big Canadian companies — Suncor, CNRL, Cenovus, Husky and Imperial — together now control almost 80 per cent of bitumen production.

By studying publicly available records, he and his research team discovered that “the Big Five” were performing relatively well — Suncor for instance had a net profit rate above 13.5 per cent in 2017 — even as tens of thousands of Albertans lost their jobs and smaller companies filed for bankruptcy.

The reason for that has to do with how these companies are structured. The Big Five are “horizontally integrated.” “Basically, they don’t just own bitumen production, they also own natural gas, they own asphalt plants,” Hussey said. “Because of that, if bitumen is at a high price, they make money off their production.”

But companies like Suncor are also “vertically integrated” — they own gas stations and refineries. “If bitumen is at a low price, then they’re just making money at the gas stations because refineries basically set the price at the pump,” he said.

This flexibility allows Suncor to take a longer view of its business model. The company runs internal scenarios attempting to predict how the oilsands industry will fare in a world that’s shifting to lower-carbon forms of energy because of climate change. Suncor expects that global demand for oil could peak in 2040 (in one International Energy Agency scenario the peak could arrive in the early 2020s).

This is one of the reasons it supports the Liberal government’s price on carbon — a policy that on its own is unlikely to achieve Canada’s Paris targets but which some climate experts agree is a crucial step towards transitioning our economy away from fossil fuels. Suncor thinks that operating with a carbon price could give it a competitive edge in a global economy moving towards lower carbon fuels.

“We need to ensure that our company is resilient in whatever low-carbon future we find ourselves in,” explained Maycher. “Thoughtful well-designed carbon-related policies can help us and our country reduce greenhouse gas emissions while ensuring we can compete on a global scale.”

The other factor is that a carbon price — at least at its current level of $20 per ton rising by $10 per year to 2022 — likely doesn’t actually hurt the company financially. “They look at that as the price of doing business in today’s environment,” Hussey argued. “It’s not necessarily going to affect their profitability... if they need to set the price of gas five cents higher, they can do that.”

The oil and gas executives organizing secret meetings to help Scheer get elected have a more hostile view of climate policy. Their smaller companies — which include Questerre Energy, Painted Pony Energy, Perpetual Energy and Surge Energy — were clobbered by the 2014 oil downturn.

“They’ve been really hit hard,” Hislop said. “Whereas the oilsands companies are very profitable, for the juniors we’ve seen failures, we’ve seen lots of balance sheets that have never recovered... they’re laden with debt. We’ve seen market access problems. The little guys were the ones who couldn’t get the space on pipelines.”

For these companies, climate action doesn’t feel like an opportunity to become more competitive. “All they see is an extra 50 cents, or a dollar or five dollars a barrel of additional costs when they’re already losing money,” he said.

Some of these executives question humanity’s role in climate change. “I guess I would say that I’m not a big fan of the IPCC (Intergovernmental Panel on Climate Change),” Peyto Exploration CEO Darren Gee wrote in a letter to shareholders this June. “I think the real problem I have with the IPCC and some of their policy recommendations has more to do with the implied arrogance of mankind in thinking we’re so significant as to affect and control the climate on this planet.”

Though these executives earn salaries many times larger than the average Canadian, some portray themselves as victims of a conspiracy to shut down the oilsands. The Calgary-based CEO of Birchcliff Energy Jeff Tonken claimed in a June press conference that “the federal government is positioning itself to let the energy industry die so that they can get votes to get re-elected.”

“That’s an extraordinary statement, absolutely extraordinary,” Hislop said, adding that there is no evidence he’s seen to support it.

Yet Tonken’s allegations were included in a press release from the Canadian Association of Petroleum Producers, the country’s leading oil and gas industry organization, where Tonken is a board chair. One of the lead industry organizers of the secret strategy meetings for Scheer — Questerre Energy founder Michael Binnion — is also on the CAPP board.

The organization’s current president, Tim McMillan, is a former founder and owner of a small oilfield services company, as well as a Saskatchewan Party MLA. “He’s one of them,” Hislop argued, referring to the grievance-harbouring industry leaders trying to push Canada to the political right.

Companies like Suncor may have most of the economic power these days, but electoral power is shifting rapidly towards the small struggling producers. Their hostile attitudes towards climate action appeal to some Albertans who feel screwed over by the downturn.

Alberta Premier Jason Kenney is happy to provide one. On July 4, his government announced the creation of a $2.5 million “war room” to investigate the “well-funded foreign campaign targeting our energy industry,” referring to shakily evidenced allegations that Canadian climate activists are acting on behalf of powerful U.S. economic interests.

CAPP president McMillan welcomed the news, saying that “our industry has shared its concerns with both levels of government for some time, and will support the commissioner and his work in whatever way is appropriate.” He went on, “this inquiry is long overdue.”

Scheer has also pushed this narrative, claiming earlier this year, “We know that activist groups from around the world, but specifically those countries that are our competitors, are using funds from foreign entities to attack Canadian industry.”

But Suncor is silent, despite the fact that in 2015 it negotiated with environmental groups now targeted by the war room — including the non-partisan Pembina Institute — to create Alberta’s Climate Leadership Plan. That plan included a 100-megatonne cap on oilsands emissions, a 2030 coal phase out and a $15 per tonne carbon price. While on its own not enough to stave off climate catastrophe, the media outlet Climate Home called it “an unprecedented step towards a greener future.”

Suncor was also silent as Kenney campaigned for Alberta premier on scrapping that climate plan. He did so even though “many people within Alberta’s biggest oilsands companies — including top executives — are worried that United Conservative Party Leader Jason Kenney represents a threat to the future of our industry,” as Suncor worker and Unifor National Energy Council chair Kim Conway wrote on The Tyee. 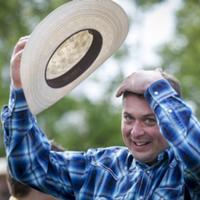 The Calgary Oil and Gas Execs Backing Scheer Might Surprise You

The company is also refusing to speak out against Scheer’s plans to repeal Canada’s national price — a policy Suncor helped consult on and says it supports. Instead, Maycher stated, “We’ve chosen to talk about energy development, the issues around it, and our performance/commitments through our recently released Report on Sustainability and climate.”

The absence of Canada’s largest oilsands producer from the upcoming federal election is in effect amplifying the power and influence of political and industry leaders who want to decimate climate policy at a time when we desperately need to be strengthening it.

Observers like Hislop wonder what it will take to spur Suncor into action. A federal government actually prepared to stand up to the oil and gas industry on the climate emergency by imposing an 85-megatonne cap on emissions and threatening severe penalties for exceeding it?

“Perhaps,” Hislop wrote earlier this year, “such a move would finally motivate progressive CEOs like Suncor’s [Mark Little] to shorten the leash of the rabid conspiracy theorists within the industry.”