The oil and gas executives quietly working to get Conservative Leader Andrew Scheer elected prime minister this fall aren’t who you might expect.

They’re not associated with big multinational companies like Shell, BP and Exxon, many of which are leaving the Alberta oilsands because they see expensive, high-carbon oil as a financial risk. Nor do these executives lead big Canadian producers such as Suncor and Syncrude, whose innovations largely built the industry.

Instead, the businesspeople who this spring organized a secret election strategy meeting for Scheer — and another fundraising event in June — earn big salaries running oil and gas companies most Canadians outside Calgary have never heard of.

Those companies collectively employ somewhere between one and two thousand people, based on publicly available information. Meanwhile, experts told The Tyee last month that a transition away from oil and gas in Alberta could potentially create tens of thousands of quality jobs across the province.

The Scheer events come at a time when some industry veterans are making the case for a lower-carbon economy.

“We ignore climate change at our peril,” Dave Collyer, the former CEO of the Canadian Association of Petroleum Producers, told Energi Media last year. “We need to, as an oil and gas industry in Alberta, embrace the change rather than resist the change.”

The executives strategizing for Scheer prefer to resist. They believe their industry is under unfair attack from Justin Trudeau’s Liberal government. They appear sympathetic to letting “the Paris climate deal die.” And they’ve discussed the idea of suing environmental groups into silence with Conservative insiders.

These executives seem to prefer working in secret, but reporting from the Globe and Mail, as well as disclosures required by Canadian law, have made their identities public.

Here are some of the cohort’s more active members.

Binnion is founder of the oil-and-gas advocacy group the Modern Miracle Network, whose stated goal is to “effectively shift the conversation surrounding energy to one that recognizes, celebrates and embraces the miracle of modern hydrocarbons in Canada.”

The group organized the meeting between Scheer and oil and gas executives on April 11 at the Azuridge Estate Hotel outside Calgary.

Binnion sits on the board of governors of the Canadian Association of Petroleum Producers. He is also the CEO and one of the founding shareholders of Questerre Energy Corp., which, like many other companies on this list, was battered by the energy sector downturn that began in 2014. Questerre’s share price dropped from $1.18 in August 2014 to less than $0.20 in May 2016.

The company’s fortunes seemed to turn around in December 2016, when Quebec passed a law opening up shale oil and gas reserves for development. Questerre, which holds exploration rights for about one million acres in the province’s Utica shale formation, saw its shares soar. But shares plunged again two years later after Quebec brought in a ban on fracking.

Binnion appears bitter about the experience, accusing anti-gas environmentalists this July of peddling “extremism.” He is also no fan of Canada’s federal climate plan, asking on his blog “how did we go so wrong on carbon taxes.” Questerre’s share price is now in the $0.20 range, yet Binnion himself is doing better than the vast majority of Canadians. His total 2018 compensation was $560,880, down from $1.3 million in 2017.

Ward is a board member of the Modern Miracle Network. He is also the CEO of Painted Pony Energy, a natural gas producer that has seen its share price drop from $14.55 in late August 2014 to about $0.78 today. The investing site the Motley Fool referred to Painted Pony last December as “beaten down,” calling it “an unattractive investment.”

Ward attended the secret April 11 meeting with Scheer. One of the sessions instructed attendees how to use lawsuits as a weapon against environmental groups like Greenpeace. It featured a former special assistant to Donald Trump named Mike Roman, as well as Arthur Hamilton, a lawyer for the Conservative party.

For companies like Painted Pony, the stakes are high. The Natural Gas Review Panel in Alberta last year concluded that the regulatory process for new gas pipelines has “broken down in the face of relentless activist pressure and ineffective process management by regulatory and government authorities.” It called this “a major impediment to the future success of Alberta’s natural gas industry.”

Yet even with his company struggling, Ward is pulling in annual compensation worth $1.8 million. The site Simply Wall Street explains that this is “more than the median CEO remuneration at companies of a similar size, in the same market.” Painted Pony’s poor performance, it added, “suggests it would be unwise for the company to pay the CEO too generously.”

Riddell Rose sits on the board of the Modern Miracle Network and is also CEO of the oil and gas producer Perpetual Energy. The company’s share price plunged from about $62 in August 2014 to about 26 cents today. A Calgary Herald profile of Riddell Rose from 2016 explained that she “spends much of her days navigating dark economic times.”

Yet Riddell Rose had it much easier than the tens of thousands of ordinary Albertans who lost their jobs in the downturn. Her father is Clay Riddell, a billionaire who’s one of Canada’s richest people. And even now with her company a financial shell of what it used to be Riddell Rose earns compensation of $746,536.

She is not a fan of Canada’s federal carbon tax, echoing the Conservative talking point that “it’s going to cost Canadians but it’s not going to improve their lives.” Riddell Rose is adamant that she cares about protecting Canada’s natural environment. “Our industry is often misunderstood in that respect,” she’s said.

But last year Perpetual Energy was sued for allegedly dumping its environmental responsibilities on another company. The lawsuit claimed Perpetual Energy sold gas wells to avoid hefty cleanup costs knowing that the buyer company was already insolvent, or would be bankrupted by the cleanup costs. “I completely disagree that there was any wrongdoing,” Riddell Rose said at the time.

The case is still before the courts.

Mike Rose is the husband of Susan Riddell Rose. He is CEO of Tourmaline Oil, which mostly focuses on natural gas. Tourmaline’s share price dropped from about $50.54 in August 2014 to about $11.42 today. But compared to some of the other companies on this list, it’s actually doing fairly well.

Tourmaline claims to be in the running to become Canada’s largest natural gas producer. Analysts predict future success. “Tourmaline has everything going for it,” wrote the Motley Fool, adding, “the management team is a very well-respected one with much success in the oil and gas industry.”

Rose was happy when United Conservative Leader Jason Kenney won the Alberta election earlier this spring. He told the National Post that Kenney’s corporate tax cuts and rollback of oil and gas regulations is “a positive development. Reducing the regulatory burden or speeding the approval process up will allow Alberta projects that we have in our portfolio to rank a little higher.”

Rose is also a board member of the Modern Miracle Network, which celebrated Doug Ford’s victory in Ontario in 2018, calling it “a win for the Canadian hydrocarbon industry.” It described Ford as “new ally” that “can bring much-needed support to our energy community.”

This June, Johnston helped organize a fundraising event for Scheer at Calgary’s Westin Hotel, where some attendees paid $1,600 to hear the Conservative leader speak with radio host and former Wildrose Party leader Danielle Smith and then take questions from the audience.

Johnston wears several hats these days. He is managing director of JOG Capital, which manages six oil and gas funds worth over $1.2 billion. He is also on the board of Pengrowth Energy, whose share price declined from $6.93 in August 2014 to about $0.37 today. The ailing company has reported net losses of over $700 million in previous years.

Johnston does not seem to be a fan of pricing carbon to fight climate change. The Explorers and Producers Association of Canada, on whose board he sits, said that it “contributed financial support to certain intervenors” to provincial efforts to have the federal carbon tax deemed unconstitutional.

The group’s executive advisor Gary Leach is also not keen on the Paris treaty. Earlier this year he argued that “under no realistic scenario will Canada come close to meeting the emission reduction targets it foolishly agreed to in the 2015 Paris Accord, nor will any other countries of significance.”

In 2018, Colborne released a seven-page “statement of facts” that he hoped would set the record straight about Alberta’s oil and gas industry. “I am the President of a large, successful, TSX listed, public oil company based in Calgary called Surge Energy,” he wrote as an intro.

Simply Wall Street earlier this year described Surge as “a rather small company.” The site advised investors “if you own shares in Surge Energy Inc. then it’s worth thinking about how it contributes to the volatility of your portfolio, overall.” Surge’s share price dropped from $8.68 in August 2014 to about $1.15 today.

Colborne himself seems to be doing all right, however. He earns compensation of $2.1 million. But his support for Scheer — Colborne helped organize the June fundraising event — may be about more than money. In his “statement of facts” he urged Canadians to stop being “embarrassed” about the country’s fossil fuels and other resources.

“Canadian Oil — A Solution, Not the Problem,” reads one section, emphasizing the “Not” with an underline. Energi Media argues that Colborne “completely overlooks the challenge of climate change, which will be driving global, national and local policy choices for the foreseeable future.” 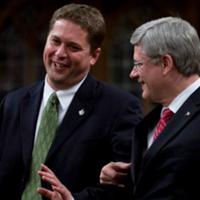 Stephen Harper Heads a Global Org That Helps Get Right-Wing Parties Elected. What Will It Do for Andrew Scheer?

Davidson also helped organize the June fundraising event for Scheer. Like many oil and gas executives, he’s been through his share of booms and busts. Yet the downturn that began in 2014 eclipsed all of them.

“This is the worst I’ve ever seen,” the former deputy chairman of the investment bank GMP FirstEnergy told BNN Bloomberg last year.

He seems to think climate action is prolonging the pain. “We were too silent when we let government tell Canadians a carbon tax was a social licence for our industry,” he said at the Explorers and Producers Association of Canada awards last year. He also questioned Canada’s involvement in the Paris climate treaty.

In that same speech Davidson urged the industry to fight back politically. He told the room “you and your firm must take an active role” against “active youth and special interest groups.” And he advised them to check out the website of the Modern Miracle Network.

Davidson was a senior fundraiser for Kenney’s provincial election campaign.

When the United Conservative Party leader won this spring, Davidson breathed a sigh of relief. “I think that a lot of the business community in Calgary and Alberta are now ready to get back to business,” he said at the time. “There might need to be a change at the federal level come October to complete the change.”