[Editor’s note: This article is adapted from the introduction of the publication that accompanies the exhibition, 'A Future for Memory: Art and Life After the Great East Japan Earthquake' (MOA Museum Note No. 48), March 2021.]

'A FUTURE FOR MEMORY' AT MOA

Event: A Future for Memory: Art and Life After the Great East Japan Earthquake

Presented by: Museum of Anthropology

Ten years have passed since Japan was rocked by a 9.0-magnitude earthquake on March 11, 2011. This earthquake caused extensive damage to the eastern region, especially the northeastern area known as Tohoku. The huge tsunami waves triggered by this earthquake swallowed up several towns along the coast and disabled the power supply and cooling of three reactors at the Fukushima Daiichi Nuclear Power Plant. This triple disaster — the earthquake off the Pacific coast of Tohoku and the tsunami, combined with the nuclear disaster — is commonly referred to as the Great East Japan Earthquake, or 3.11 (san ten ichi ichi, literally “three-dot-one-one”). It has made people in Japan and beyond rethink our ways of life in relation to nature. Even in the midst of disasters, people have the desire to create and to express themselves — as does nature itself.

A Future for Memory: Art and Life After the Great East Japan Earthquake is being held in the tenth anniversary year of the disaster. This exhibition addresses how we deal with memory when our physical surroundings are drastically altered. It examines the immaterial and material traces of memory and history. It also explores the bias inherent in the ways we may see the situation from outside Japan. For instance, this disaster is often referred to as “Fukushima” by people outside Japan, whereas that name designates only one of many prefectures affected. The exhibition focuses on changing physical and psychological landscapes in the aftermath of 3.11. It shows that the disaster is not simply about a region (Tohoku) or a country (Japan), but has global relevance. There are 19 nuclear reactors in operation in Canada, the second largest producer and exporter of uranium in the world. A nuclear meltdown in this country, similar to the one at the Fukushima Daiichi power plant, is not inconceivable. Fishing boats from Tohoku have swept up on the shores of the Pacific Northwest, reminding us that we are connected by the same ocean and are mutually responsible for our environment.

This exhibition derives from my personal experience in the disaster region. My initial involvement with relief and recovery activities in 2011 was in Miyagi prefecture. I worked particularly closely on rescuing and cleaning photographs found among the debris, an experience that led me to reconsider the relationship between memory and objects. Going back to Tohoku every year since then (except in 2020 due to the COVID-19 pandemic), I have continued to collaborate with local museum professionals, survivors, volunteer groups and artists.

Recovery from a disaster is a long process. Art can be a crucial component in revitalizing disaster-affected communities, as it can provide an opportunity for reflection and create a shared sense of hope. Museums and archives can also play a vital role in documenting experiences and preserving memories and histories. This exhibition explores connections and relationships that have been developed because of this tragic disaster and demonstrates how people have undertaken the process of recovery and are preserving histories and memories for our common future. 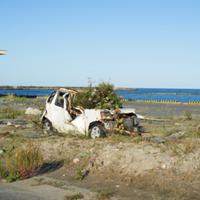 A Future for Memory is also an important occasion for those of us living in Canada to consider the impact of natural disasters and their implications as we prepare for potential future disasters. Because Canada has not suffered a major earthquake or tsunami of this scale in living memory, we often see such disasters as someone else’s problem, not our own. But the coast of British Columbia is the region most at risk of earthquakes and tsunamis. A Future for Memory not only complements MOA’s ongoing engagements with preserving cultural heritage but provides opportunities for further discussion while we undertake seismic upgrades of the museum’s iconic Great Hall.

The works and photographs in the exhibition trigger memories, emotions and imagination. They serve as more than just objects of memory by reminding us to not forget the disaster or the continuous efforts of many survivors to rebuild their lives. I believe there is a future for memory through the creation of connections that will be passed on for generations to come.

This exhibition runs until Sept. 19, 2021, at the Museum of Anthropology. To book your tickets, go here.