Simon Fraser University president Joy Johnson is currently considering whether the university should end its practice of outsourcing campus cleaning and food services. The choice she makes will tell us whether our university will live up to its recent commitments around equity, diversity and inclusion, or whether these words are simply a branding exercise in the market for post-secondary education dollars.

For many years now, the workers we depend on to feed us between classes and keep our lecture halls clean have been contracted to SFU by private companies. At the moment, Best Service Pros provides cleaning services, and Chartwells staffs our cafeterias. This work is predominantly done by women, workers of colour and immigrants to Canada. The makeup of this group of workers could not be more demographically different than the university’s highest-paid employees.

At SFU, the workers in our cafeterias and those cleaning our lecture halls make less than a living wage, can’t access child-care facilities on campus, receive no top-up to parental employment insurance wages if they have a child and get no tuition discount if their spouses or children attend our university. They can’t even use our libraries.

To say that these workers are structurally excluded from the university community doesn’t quite capture the indignity of the situation — our administrators don’t even register their existence. A distressing example of this came in 2019 when SFU carried out its “Diversity Meter” survey as part of an equity, diversity and inclusion initiative on campus: data on these workers wasn’t even collected because their work is outsourced so the university is not technically their employer.

How we got to this point has to do with decades of underfunding for post-secondary education in British Columbia. Under neoliberal governments beginning in the 1980s, universities began to cut costs and private companies stepped in to fill the void for less money. As a result, universities have been able to avoid the responsibility of managing their low-wage workforces while the cost of living increased, contracts flipped, and wages and benefits stagnated.

Unions representing these workers at SFU have worked hard to protect them, but years of Liberal governance have made it an uphill battle. In 2017, under then-president Andrew Petter, food service workers faced the harrowing prospect of losing their jobs simply because the university decided to ditch its Chartwells contract for Sodexo. (Four years later on the contracting-out merry-go-round and Chartwells is back, and food service workers are going back into bargaining with the company again.)

It doesn’t have to be this way. Last year, Contract Worker Justice @SFU, a coalition of workers, trade unionists, students and faculty on campus began to review the pay and benefits of this workforce and compare them to those of workers who perform the same work in-house at the University of British Columbia and the University of Victoria. Not surprisingly, the coalition found that workers at SFU fare worse than their colleagues in every single respect.

“These workers deserve respect, job security and the stability to provide for their families,” Chen said in her endorsement of the campaign. “For them, we can and must do better.” 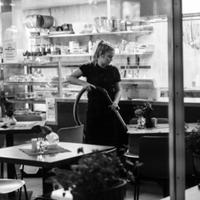 We’re Not Short of Workers. We Have Too Many Crappy Jobs

The movement to “in-source” low-wage work at public institutions is gaining steam in the province. Workers at City Hall Café in Burnaby, for example, used to work for Chartwells and are now employed by the City of Burnaby. A long-time city staffer told me the city has “zero regrets” about the decision. And the provincial government just reversed the outsourcing of 4,000 hospital cleaning and dietary workers, bringing them back in-house as health authority employees.

SFU has launched promising equity, diversity and inclusion initiatives for faculty and staff, but it is fretting about whether it can afford to do the right thing for the people who clean our classroom floors and cook our food.

That president Johnson is committed to examining the in-housing of these workers is to her credit. The answer she settles on will tell us whether the equity agenda she promoted since taking on the role of president in 2020 will transition from words to action.

If the university truly cares about equity, diversity and inclusion, it must start with its low-wage workforce.