I care passionately about improving Canada in various ways. The most important is electoral reform.

So I was deeply hurt when the Liberals abandoned their electoral reform promise.

But I was also deeply hurt when the NDP and Greens joined with the Conservatives in 2016 to insist that a referendum was necessary before we could have electoral reform. Both parties had initially said a referendum was not a good option.

Who broke their word? Only the Liberals? Or did the Greens and NDP also break their word when they reversed their opposition to a referendum and joined with the Conservatives in declaring a national vote was needed before introducing proportional representation?

The two parties said they did it out of pragmatism, hoping to create a united approach with the Conservatives and Bloc Québécois that would force the Liberals to move forward with their preferred voting system. It didn’t work.

Green reversal, and the problem with referendums

The Green platform released last week doesn’t mention a referendum, suggesting the party has again reversed its position. The NDP now says it would hold a referendum after one election under proportional representation to determine if voters wanted to stay with the system.

Referendums are generally a bad idea. They take complex issues and reduce them to overly simplistic votes. They ask people: Do you want change or not?

Most people are against change, and it is far easier to get a No vote in a referendum than a Yes vote. A typical No campaign is aimed at creating uncertainty and fear based on a worst-case scenario. It’s easy for governments to concoct complicated or even sneaky questions, tell people lies they want to hear and ignore referendum spending laws. And the result is often a close result with low voter turnout — easy for governments to ignore.

Referendums that involve the rights of already vulnerable or marginalized groups are especially dangerous. The whole reason we have a constitutionally entrenched Charter of Rights and Freedoms, rule of law and independent courts is to make it more difficult for the majority to discriminate against their targets-of-the-day. (One of the main effects of first-past-the-post is it prevents minority views and communities from having a meaningful role in our democracy.)

But somehow, we’ve come to believe that we simply must have a referendum on proportional representation.

The NDP and the Greens and our leading political columnists rarely say, “Hold on, let’s have a referendum about those things!”

The way we vote and elect MPs and provincial legislators is governed by various elections acts. New governments routinely amend those without referendums. The Conservatives have changed the act to create more advantages for parties that represent the wealthy and reduce public funding to political parties.

Historically, our election laws prohibited women and numerous ethnic communities from voting. Incrementally, we expanded the right to vote. These amendments almost always happened without referendums.

The only issue where conventional wisdom seems to demand a referendum is proportional representation.

Of course, the Greens and the NDP would like to see proportional representation implemented. But their approaches, including the requirement for a referendum, set them up for failure.

NDP’s provincial track record, and if they were serious

A party that is serious about electoral reform would say, “If we are elected, or if we hold the balance of power in a minority government, we are going to implement proportional representation without a referendum.”

And a really serious party would say, “We have seen all of the studies and all of the proportional representation systems around the world, and here is the PR system that we are going to implement if elected.”

No need for a referendum, or a citizens’ assembly or a Royal Commission. Get serious, choose your option, make it part of your election platform and implement it. If you won’t do that, why should I think you’re serious about electoral reform?

There has never been a Green party in Canada that came remotely close to forming an Official Opposition (except in 2019 in P.E.I.), let alone a government. Why should I think a vote for the Greens is going to bring us any closer to proportional representation?

And the provincial Greens and the NDP combined to make a mess of a referendum on proportional representation in B.C. Again, how can voters take their claimed commitment seriously?

No thanks to what Greens and NDP promise this time

Green Leader Elizabeth May is promising a citizens’ assembly to determine the best alternative to the first-past-the-post system. Thanks, but no thanks. Fifteen years ago, a similar body in B.C. recommended a single-transferable-vote system, which received the support of 58 per cent of British Columbians in a 2005 referendum. (Which media routinely describe as a vote against proportional representation. Show me any government that has won 58 per cent of the vote.) Manitoba, Alberta and B.C. had used versions of the single-transferable-vote in earlier decades. But the change still didn’t happen.

The Greens want me to vote for them based on their vague commitment to implement some alternative to first-past-the-post, without offering a clear alternative. Couldn’t they at least tell me what form of PR they are proposing? There have been more than enough studies about replacing first-past-the-post in Canada and around the world.

The federal New Democrats say that if they form the next government they will introduce a mixed-member proportional representation system in time for the next election. But they say they need a citizens’ assembly to determine how to implement the system and a referendum would be held after the election to determine if voters wanted to stay with the new system. 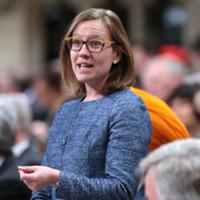 Will the Liberals’ Broken Electoral Reform Promise Hurt Them?

If the Greens and NDP are so wishy-washy about implementing proportional representation, how would a vote for them punish the Liberals for their broken promise to get rid of first-past-the-post?

The most likely way that the public will punish the Liberals is by staying home and not voting. And if voters do switch to the NDP or Greens, the first-past-the-post system means the real beneficiaries could be the Conservatives.

I want to vote for a political party that makes a clear commitment to implement a specific proportional representation system, without a referendum or citizens’ assembly. This would show their commitment.

Should proportional representation be the only issue in Canadian politics that requires a referendum or citizens’ assembly? I don’t think so.