The euphoria was toxic. It’s Nov. 4, 2008, and America’s first black president has just been elected.

Fast forward eight years later. Flickering TV sets in millions of homes across the country light up expressions of dread as a mixture of melancholy and disbelief sets in. Surging on a platform of border walls and bigotry, Donald Trump has won the 2016 election, supported by 47 per cent of U.S. voters.

What happened between 2008 and 2016 in the United States? The answer to that puzzle is something of a holy grail. But Canadians need to take that puzzle seriously, too.

That’s because right now, Canada possesses a few of the same characteristics present in the U.S. during those eight years — a charismatic leader prone to betrayal, complacent centrism, and a resurgent right. And we should be worried about how those things will interact.

Trudeau has a record of broken promises. From the voting system, to climate policies, inequality, health care and trade deals, his commitments to reform in a wide variety of areas simply did not materialize.

The resentment towards the Liberals’ callous attitude is palpable. A recent poll found that 35 per cent of the respondents approved of Trudeau, compared with 63 per cent in his first month in office.

There’s reason to believe that the mismatch between Trudeau’s progressive aura and his curiously elitist attitude as prime minister isn’t a coincidence.

A 2018 study suggested that many male politicians adopted socially liberal policies for purely practical reasons, like appealing to progressive voters.

The Liberals’ strategy is deeply problematic. Trudeau can fill his cabinet with as many women from the government and economic elite as he wishes. But if Canada’s underlying economic inequities are not resolved, the gender pay gap will continue unabated.

Canada’s right is both growing and radicalizing. Figures like Jordan Peterson have ascended to pop-star status, and there’s also been a surge of support for far-right extremist groups.

Doug Ford’s win in Ontario showed how the reactionary backlash can enter the mainstream, and Maxime Bernier’s new People’s Party of Canada — fed up with “Trudeau’s extreme multiculturalism and cult of diversity” — shows the right-wing turn is also a federal phenomenon.

Trudeau’s government and the far right’s renaissance have coincided strikingly closely. But that’s probably no accident. This isn’t the first time that the far right has flourished under a centrist government with a penchant for betrayal.

At first, Barack Obama’s own slogans of hope and change promised a dramatic shift in America’s political status quo. Yet multibillion-dollar bailouts and mass surveillance programs shattered that initial euphoria. For decades, the Democratic Party had retreated from working class concerns, and Obama was no exception.

As the disillusionment with Obama’s presidency grew, unknown political forces emerged from the shadows — alt-right leaders like Steve Bannon, or a billionaire turned sardonic presidential candidate. With Trump’s victory in 2016, the far right breached into the mainstream.

Trump was never a candidate with preponderant working class backing. But his ability to win reach key Rust Belt counties, as well as voter apathy, enabled his win.

And since the Liberals have now associated socially liberal values with broken promises and elitist opacity, any cause with a progressive ethos may be regarded with deep suspicion. 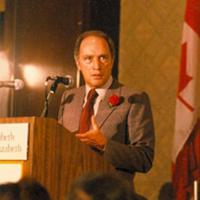 Granted, it’s improbable that a Trump-like figure will appear in Canada, and that kind of hysterical prophecy isn’t what is being pondered here.

Rather, Trudeau has set the stage for the anti-immigrant, anti-progressive and pro-business right to infiltrate the mainstream and turn politics to the right. That process is already underway.

Conservative leader Andrew Scheer seems quite comfortable with personalities associated with Rebel Media, while his advocacy of tax cuts for corporations certainly will not empower Canada’s have-nots. Scheer’s penchant for mockery, coupled with his socially conservative stance and personal convictions, indicates he is taking his cues from the new American right.

For those of us who hope for a more equitable and just society in Canada, that’s a problem. In the wake of disappointment, the forces of reaction are emerging from the shadows.