[Editor’s note: Seth Klein, who founded B.C.’s branch of the Canadian Centre for Policy Alternatives 22 years ago, finished there in late December. Here is part of the farewell message he posted as Shannon Daub takes over as director. He is at work on a book about Canadian politics and the climate emergency.]

We at the CCPA call ourselves Canada’s foremost social justice think tank. But what do we mean by social justice? The great African-American intellectual Cornel West defines social justice as, “what love looks like in public.” I like that. Social justice is love and caring for one another, expressed through progressive public policy. That’s our goal. It is why we feel such affection for those with whom we do this work.

Here’s a little secret: when I am giving talks around the province the question I most dread is “What keeps you so hopeful?”

I dread the question because one’s impulse is to lie. The person asking the question is seeking hope and the urge is to oblige. But the truth is any of us as progressive activists, with the courage to see the world as it is and the conviction to seek to remake the world as it should be, walk a razor’s edge between hope and despair. We feel and know both. And maybe we should be more open about that.

And yet, I do see hope. I see it in the slow but sure progress of our movements. I see it in our research, which tells us that the world we want is possible given the political will. I see it in the activism and good will of people I’ve gotten to meet around the province in this job. I see it in the values of our fellow British Columbians and Canadians. From time to time, we at CCPA do polling on values (not much, it’s expensive). And when we do I’m always struck that, as a society, whenever we are given a choice between a private gain like a tax cut and a public good like spending on enhanced public services or tacking homelessness and poverty, for most people, the public good wins every time.

And so, here’s what I believe after 22 years in this job: the values of British Columbians are — in the main — good and progressive and caring. We just need a politics that allows people to give those positive values proper expression.

The values of British Columbians and Canadians are at the heart of what our work at the CCPA is all about. Many of you have heard me say that when I have to describe in a sentence what our organization does, I say, “We produce and promote research that shows our best values are possible.”

News of the loss of the electoral reform referendum is very disappointing — in the face of fear, misinformation and uncertainty, the status quo always has an advantage. And so, the struggle to help people find a way to give their best values true expression continues. And so, while we do indeed live in a time of uncertainty and sometimes high anxiety, there is always hope.

A couple of years ago, my friend comedian Charlie Demers created a remarkable one-man play called Leftovers. A truly amazing play — hilarious, of course, but also deeply moving and hugely politically insightful. Charlie’s play, which maps the history of his family over our shared political history, captures the pendulum swings of our politics: his mother was born at the cusp of a time when we were weaving and strengthening our social safety net and public services; Charlie was born in 1980, when neoliberalism was launching the Thatcher and Reagan revolutions and Milton and Rose Friedman’s free-market bible Free to Choose held a commanding place on the bestseller list; and yet, unlikely as it was, when Charlie’s daughter Josephine was born in early 2014, Thomas Piketty’s book Capital in the 21st Century held that top spot.

Now no one would accuse Charlie of being Pollyanna. He is honest. His play shares with us how, as a progressive activist and thinker, he wrestles with despair. But near the end of his play, he offers this little and obscure glimmer of hope. He tells of a late ultrasound he and his wife Cara were given when their daughter was overdue. The doctor warned them that when an ultrasound is done just before birth, the baby is so large you can’t make out a bloody thing. Yet you are about to be blessed.

Charlie’s point, as I took it, was that as anxious as we may feel, sometimes the dawning of something amazing is just before us, but it’s so damn close, we can’t make it out. The new and beautiful world we crave may be closer than we think. I believe it, because history is full of surprises.

I’ll close with my favourite quote from the late great American historian Howard Zinn. Here’s something he wrote on that subject just a few months before his death in 2007 at age 87:

“In this world of war and injustice, how does a person manage to stay socially engaged, committed to the struggle, and remain healthy without burning out or becoming resigned or cynical?

“I am totally confident not that the world will get better, but that we should not give up the game before all the cards have been played. The metaphor is deliberate; life is a gamble. Not to play is to foreclose any chance of winning. To play, to act, is to create at least a possibility of changing the world. 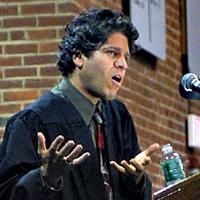 What Cynicism Costs Us

“There is a tendency to think that what we see in the present moment will continue. We forget how often we have been astonished by the sudden crumbling of institutions, by extraordinary changes in people’s thoughts, by unexpected eruptions of rebellion against tyrannies, by the quick collapse of systems of power that seemed invincible.

“What leaps out from the history of the past hundred years is its utter unpredictability...

“I have tried hard to match my friends in their pessimism about the world (is it just my friends?), but I keep encountering people who, in spite of all the evidence of terrible things happening everywhere, give me hope. Wherever I go, I find such people.

“Even when we don’t ‘win,’ there is fun and fulfillment in the fact that we have been involved, with other good people, in something worthwhile.

“To be hopeful in bad times is not being foolishly romantic. It is based on the fact that human history is a history not only of competition and cruelty but also of compassion, sacrifice, courage, kindness.

“What we choose to emphasize in this complex history will determine our lives. If we see only the worst, it destroys our capacity to do something. If we remember those times and places — and there are so many — where people have behaved magnificently, it energizes us to act, and raises at least the possibility of sending this spinning top of a world in a different direction.”