While the main headline from Thursday’s Ontario provincial election was a majority government for the Progressive Conservatives and their populist leader Doug Ford, there was another intriguing development: the Green Party of Ontario winning its first seat. It was an emphatic victory, with party leader Mike Schreiner earning more than twice as many votes as the runner-up in Guelph, despite opinion polls predicting a tight local race.

The Greens’ initial seat in Ontario marks a Canadian first in two regards: the first provincial Green seat secured without the aid of participating in televised leaders’ debates, as well as the first time the Greens have won a provincial seat as the fourth party (rather than as the third party). For Ontario, Schreiner’s arrival at Queen’s Park marks the first occasion since the early 1950s that the chamber will host more than three elected parties.

Schreiner handing the Greens their first seat may not initially appear to be a notable realignment of the party system, but it is part of a broader shift quietly unfolding throughout much of Canada. The number of Greens elected provincially across the country has more than doubled — from three to seven — over the past 13 months.

That number shows promise of growing considerably again by next year. New Brunswick will hold an election this September, where David Coon hopes to be joined by at least one other Green colleague. But it’s in Prince Edward Island where Greens look especially poised to pounce.

The majority of political opinion polling conducted in P.E.I. this year suggests the Greens are in second place, if not first. The most recent poll, conducted by Corporate Research Associates, found that the Greens trail the governing Liberals by just one percentage point. If these numbers hold, the Greens are destined to become — at worst — the official opposition in P.E.I., which would be the greatest victory ever for Greens anywhere in the world that uses the antiquated first-past-the-post election system.

Both of these Maritime elections are scheduled to occur before the next Canadian federal contest, expected in October 2019. Would an unprecedented result for the Greens in Atlantic Canada provide the federal Greens enough momentum to finally win additional seats, possibly beyond their base in British Columbia?

After winning their first seat in 2011, the federal Greens soon came close to electing a second member of parliament, narrowly losing a 2012 byelection in Victoria to the NDP. Hope for a breakthrough was again targeted at Victoria in the 2015 general election, but another second-place finish (at a decent 32.9 per cent) wasn’t sufficient.

The federal Greens, with their momentum now largely sputtered, could certainly use a boost from the provincial scene. Their best general election result was a decade ago, when the Canadian Greens earned almost seven per cent of the vote in 2008 after Elizabeth May’s first appearance in the televised leaders’ debates. But it’s been largely downhill from there regarding their share of the vote, especially in 2011 — ironically, when Elizabeth May won the federal Greens their first seat. Strategic voting has proved a formidable hindrance for the upstart party.

Expanding beyond one MP looks particularly urgent for the Canadian Greens. May has served as the party’s leader for a dozen years, and more often than not has been the party’s only elected official — other than a couple of occasions when a single MP crossed the floor to join the Greens. Her workload as the party’s sole elected flagbearer is surely unenviable, and May is already in her 60s. Just two years ago she made a public statement that she wanted to spend some time to consider whether to remain as the party’s leader. 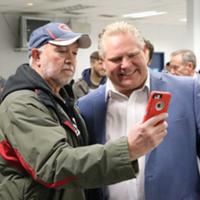 May will have to retire from politics eventually, and so the Canadian Greens’ continuity plan almost certainly involves electing more members prior to May’s departure. The 2019 federal election could be their last opportunity, which places further importance on gaining momentum from provincial politics before then.

Looking further ahead, Ontario is scheduled to host its next provincial election in 2022. With Mike Schreiner and the Greens expected to participate in future televised debates, they could make additional gains, especially in favourable ridings such as Parry Sound-Muskoka.

In the meantime, Ontario Premier-designate Doug Ford will have to decide not just whether to extend official party status to the faltering Ontario Liberals, but also if it should be granted to the Greens. In the three provinces that previously elected Greens — B.C., New Brunswick and Prince Edward Island — they received such status, permitting the Greens additional speaking time and broader stature. This may have been the result of political calculations rather than democratic benevolence, and Ford’s strategists are now likely attempting to determine whether giving the Ontario Greens a greater standing at Queen’s Park would impair the NDP and Liberals more than the Conservatives.