Steve Burgess is an accredited spin doctor with a PhD in Centrifugal Rhetoric from the University of SASE, situated on the lovely campus of PO Box 7650, Cayman Islands. In this space he dispenses PR advice to politicians, the rich and famous, the troubled and well-heeled, the wealthy and gullible.

I am writing to ask you for money. I bet my savings and mortgage and dog that Doug Ford could not possibly win the Ontario Progressive Conservative party leadership. Now I am living off handouts and the meagre proceeds of my Maclean’s column. Can you help?

Clearly the rules have changed. From now on, in any political contest, the candidate whose entry into the race causes a collective spit take followed by a loud guffaw will immediately become the favourite.

Doug Ford, former Toronto city councillor and right-hand man to the city’s most talk-showy mayor, has been elected Ontario PC Party leader. Probably. Candidate Christine Elliott disputed the result before ultimately backing Ford, saying the vote tabulation system was completely botched. But come on. In order to believe that, you’d have to believe that the Ontario PC party is run by a bunch of screw-ups who couldn’t organize a broom closet at a bonspiel.

Yes, it’s true that the whole race started in a welter of chaos — if it had been a NASCAR event the flaming, spinning, bouncing, cartwheeling wreckage would have led off every sportscast in North America for days. Leader Patrick Brown was accused of sexual impropriety, vowed defiance, then quit, then tried to unquit, then joined the race as a candidate with the party’s blessing, then quit.

But never mind, all would be well at the convention. The balloons were waiting to drop. And then they did the convention like Arie Luyendyk Jr. did Becca K. on The Bachelor.

Hold those balloons. When party chair Hartley Lefton finally came to the podium after hours of confusion and delay you almost expected him to announce, “We’re going to the mattresses.” Instead he thanked the crowd for their patience, then told them to pack up their crap and scram before somebody turned on the sprinklers. The convention hall reservation expired at 7 p.m.

It ought to have been plenty of time, right? Then again, the slogan at Ontario PC Pizza is “Your pizza delivered in 14 hours or we’ll get to it eventually,” so perhaps we should have guessed. Besides, as the CBC revealed, there was a Filipino bodybuilders’ convention set for the next day and they had to get the place ready. Too bad. It would have been a great mash-up. Hope the bodybuilders had fun with the balloons.

Turn out the lights, the party’s over. Or so you’d think. But as we have seen on the southern horizon lately, massive dysfunction is not the political dealbreaker it once was. Your modern resentment-based voter is not deterred by displays of incompetence. It’s just disruption of the elites, man. And as we have also discovered, a large amount of wealth does not make you a member of the elite as long as you prove yourself piggish enough to get thrown out of a Jersey stag party. The Ford family’s money is irrelevant as long as Doug continues to sound like a phony Twitter account operated out of Vladivostok.

Ford’s victory had another Trumpian aspect — just as The Donald won despite losing the popular vote, Ford managed to win on points despite Elliott’s edge in both number of votes and number of ridings. This is because the Ontario PC Party seems to have awarded electoral points based on a candidate’s jowls, number of Toronto Star headlines, and/or appearances in bestselling books with the word “Crazy” in the title. 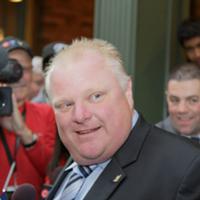 Think Trump’s Impossible? I Have Two Words for You

But would Premier Doug Ford be the Ontario equivalent of President Donald Trump? The Doctor thinks that’s a little off. Rob Ford was the Trump figure. Doug Ford would be more like Premier Steve Bannon. In Ford Motor Co. terms, Rob was the Pinto whereas Doug is the Maverick — pretty much the same vehicle but perhaps not quite as prone to explode in flames.

Not that Doug is exactly the Consumer Reports’ recommended choice. After a Globe and Mail article detailed allegations that Doug was a hash dealer in his youth, he gave an interview to Global Toronto and said, in part: “I’m against drugs, I don’t condone drugs, I’ve never touched any drugs, I despise drugs... did I buy a joint here or there, whatever? Absolutely.”

So a leadership race that began when Patrick Brown was judged unfit for office has ended by anointing Doug Ford. “The arc of the moral universe is long,” Dr. Martin Luther King once said, “but it bends toward justice.”

The political arc, on the other hand, just seems like one non-stop bender. Brace yourself — Vancouver real estate might get more expensive yet.