If the federal government backs down on its plan to close a tax loophole exploited by high-income earners, the rich people have won.

We’ve spent a couple of decades being bombarded with the message that the only acceptable tax changes are cuts.

As the Trudeau Liberals are learning.

Tax laws now give special breaks to “Canadian-controlled private corporations.” The idea, long ago, was to help small business owners.

But tax planners realized anyone could pay the fee, file the papers to turn themselves into a private corporation and cash in on the tax breaks. Doctors, lawyers, consultants, even managers, rushed to cut their tax bills by forming personal corporations. (Just look at those “For Sale” signs on houses around Vancouver, and all the realtors now doing business as a personal corporation.)

The tax benefits are significant, and the higher your income the more you benefit.

First, there’s income sprinkling. The finance department presentation on the loopholes uses the example of two neighbours, both high-income earners collecting $220,000 a year.

But the other, who had set up a personal corporation, could split the income with adult family members. The person who did the actual work could claim an income of $100,000 for tax purposes, instead of $220,000. The other $120,000 could split between a spouse and two adult children in lower tax brackets in the form of dividends. The result would be a $44,000 tax bill — 44 per cent less than the taxes paid by the neighbour.

That’s just the start of the benefits. People who set up personal corporations reduce taxes by holding investments — not necessarily related to their business — within the corporation. And they can use the corporation to convert income to capital gains, taxed at a much lower rate. (The amount of investment income being sheltered in Canadian-controlled private corporations tripled between 2002 and 2015, the government says.)

More and more people are taking advantage of the loophole to pay less in taxes.

And as a result, the rest of us are paying more. Tax policy is increasing inequality.

The government’s proposals are hardly draconian. Income-splitting, for example, would still be allowed if the family members did some work for the corporation, or invested.

But the anti-tax lobby leapt into action anyway on behalf of the right of some 1.8 million high-income Canadians to pay less tax than their neighbours.

Doctors, big beneficiaries of the loopholes, campaigned against tax reform, but fared badly. There was an air of privilege as they said they deserved the tax breaks because they had no workplace pension plan, forgetting that only about 20 per cent of Canadians working in the private sector have pension plans.

And their campaign clashed with the messaging from a coalition including the Canadian Taxpayers Federation and the Canadian Federation of Independent Business. They attempted to frame the changes as an attack on “middle-class business owners from every sector of the economy.” The CFIB noted that two-thirds of business owners earn less than $73,000.

The doctors’ campaign highlighted the reality that this isn’t about people who own small businesses. In fact there is little benefit to thinking about a personal corporation until income is more than $100,000. That means more than 90 per cent of working Canadians can’t use the loopholes. And, using the CFIB’s number, the vast majority of small business owners can’t either. (But among the one per cent with the highest incomes, two out of five tax filers have personal corporations, notes Andrew Coyne in the National Post.) 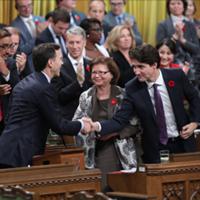 Partly, we’re seeing the result of years of PR campaigns and lobbying to convince the public that any tax — and especially any increase — is inherently bad. Instead of a rational discussion of what services are needed and how they can be efficiently delivered and paid for, lobby groups like the Fraser Institute and Canadian Taxpayers Federation have created the notion that taxation is theft.

The whole issue is also a reflection of the success of corporate efforts to win tax cuts for business. The federal small business tax rate is 20 per cent lower than it was in 2000, and provinces have made similar cuts. The federal corporate tax rate was cut almost in half in the same period. That, the government notes, made it more attractive for people to find ways to stop paying income tax and pay business taxes.

We’re also being reminded that people with money have more influence than the rest of us. The main beneficiaries of the current loopholes are a tiny minority of taxpayers. But they are affluent and organized, and supported by lawyers and lobbyists, and Liberal MPs are listening and urging Morneau to allow some of the loopholes to remain open.

And we’re seeing, again, the failure of the political process. The Conservatives, predictably, are denouncing the changes. But the federal NDP, which should back tax fairness, has offered little support for these changes.

It’s likely these proposals could be improved. That’s why the consultation process is underway.

But if they’re gutted or killed, it will be a signal that changes to bring increased tax fairness have become impossible.