On Oct. 13, 2016, shortly after 1 a.m., Kirby Corporation’s tug the Nathan E. Stewart and its barge ran aground in the heart of Heiltsuk territory.

Less than eight hours later it had sunk, and 110,000 litres of diesel fuel and 2,000 litres of lubricants, heavy oils, other pollutants were released into the surrounding waters.

On charts, the area northwest of Bella Bella is known as Gale Passage, but to our people, this is Q’vúqvai.

For millennia, it has been the site of one our ancient tribal groups, the Q́vúqvaýáitx̌v; a home to ceremonial practices (past and present); and one of our richest harvest grounds. Until diesel saturated these shellfish beds last fall, our people harvested at least 25 food species from the area, including the red sea urchins, sea cucumber, herring roe, rockfish, halibut, and clams.

Despite deploying first responders as soon as possible, our people were helpless to stop the spill.

For us, the spill is a catastrophic injury to our food sources, culture, and economy and, thanks to Kirby Corporation and the governments of British Columbia and Canada, we expect the road to recovery will be a long one.

To date, Kirby Corporation has been unwilling to meet our requests for comprehensive post-spill research or a health impact assessment. Instead, the U.S.-owned corporation has purported to be proceeding with a limited environmental impact assessment, looking only at sampling and monitoring work conducted in a short period of time after the oil spill and a one-week period in early 2017. (Technically, impact assessments are not a required part of the federal and provincial government’s “world class” oil spill response.)

The B.C. Ministry of Environment and Kirby are apparently negotiating some kind of memorandum of agreement regarding the purported impact assessment, but have excluded us from those discussions.

In light of this inadequate and exclusionary approach, we are proceeding with our own impact assessment.

The Western science component will rely on the biological sciences to help determine the current and long-term impacts of the spill on the health of the ecosystem and marine resources.

The traditional assessment is based on Heiltsuk knowledge and will seek to understand how long it will be before harvesting can safely begin again.

Finally, the health impact assessment will be based on health, social science, and first person research used to determine the impacts of the events on our members. These include the social and economic consequences associated with the loss of harvest and the use of the impacted area.

In addition, we are preparing to take legal action, aiming to recover damages suffered by our people as well as to examine the actual state of Canada’s “world class” oil spill response system.

The case will be about recovering damages for loss of commercial harvesting of marine resources and loss of Aboriginal rights relating to food, but also relating to the social and ceremonial importance of marine resources — factors that the current oil spill liability framework does not account for. The existing framework excuses both the polluter and government from full responsibility for spill impacts on Aboriginal rights otherwise protected by the Constitution. 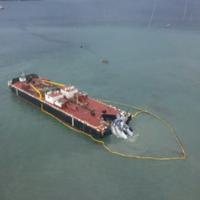 It is unacceptable that our social and cultural rights are paramount in principle, but evaporate in practice.

In light of this, along with the deficiencies we documented in the spill response and broader concerns related to the lack of consultation regarding marine plans in our territory, we will also be asking the courts to assess whether the existing regime of liability for oil spills can really be considered constitutional.

Based on our experience, the current system is anything but world-class, and government and polluters must be held accountable.

Councillor Jaimie Harris is visiting Victoria (Aug. 30), Duncan (Aug. 31), and Salt Spring Island (Sept. 1) to share her account of the fuel spill. The tour is being organized by RAVEN (Respecting Aboriginal Values and Environmental Needs) as a fundraiser for the Heiltsuk’s legal defense. The event also features underwater photography from the spill site. For details, click here.