In cities like Vancouver only a privileged few can afford to own a home. The rent that the rest of us have to pay is going up all the time. The shops, restaurants and gathering spots that give our neighbourhoods life are turning into pricey boutiques and luxury high-rises. And nobody seems to understand why. We blame the new art gallery in a low-income area. The hip coffee shop that follows. The developer who buys up all the surrounding property. Or the foreign buyers who snap up the new condo units before they’re even built. In our confusion, we often blame ourselves.

But the ultimate cause of Vancouver’s unaffordability crisis may reside in our financial system — and a seismic shift at its centre that’s now remaking the global economy. This shift helps explain why cities across the world are undergoing the same transformation as Vancouver. And why, over the past decade, global centres of commerce and culture — from Sydney to San Francisco, and from New York to Hong Kong — have become so costly for anyone who doesn’t belong to a wealthy elite.

One of the first organizations to document this shift was Bain & Company, a global business consulting firm that produces influential research on major economic and social trends. In 2012, it announced that our global economy has reached a “decisive turning point.”

The amount of global capital — or “financial assets” — available to invest is rising much more rapidly than actual economic growth. Five years later, there’s so much capital available that investors don’t know what to do with it all. They’re pouring it into investments like real estate. The result is sky-high prices.

“It’s neither good nor bad to have a large amount of capital,” Bain & Company’s Karen Harris recently explained to The Tyee, “but large amounts generate bubbles and other challenges we are seeing across asset classes, and real estate in particular.” Harris added that cities such as Vancouver have been hit particularly hard.

To understand why this shift is happening, and its role in creating a $2.4-million “fixer-upper” in Vancouver, along with other insane house prices across the world, you first need to know what distinguishes our “real economy” from the “financial economy.”

The “real economy” is what most of us are familiar with. It’s the stuff made in factories, the food grown on farms, the movies filmed in studios, the people employed in graphic design firms. It includes all the goods and services produced across the world — the global GDP — and the infrastructure that makes this activity possible.

The “financial economy” is more nebulous, but no less important. This is where investment happens. It’s where people in offices on Wall Street or Bay Street bet on the value of companies or industries. It includes things like securities, mutual funds and bonds, along with the balance sheets of banks and other financial institutions. It’s the reason that “bubbles” happen. It’s what helped cause the Great Recession.

Several years ago Bain & Company noticed something unusual: the rate of growth of the “real economy” was slowing down, while the “financial economy,” despite the worst financial crisis in decades, was accelerating. By 2010, the value of all the investment capital in the “financial economy” — essentially, the stuff that investors use to invest in things — was $600 trillion, triple what it had been two decades earlier. It was worth 10 times more than all the goods and services in the “real economy.”

You could spend your entire career studying the reasons for this shift. But in essence it comes down to two things: digital technology and globalization. Digital technology allowed investors to create more sophisticated — and profitable — ways of investing, while globalization led to massive amounts of new wealth in countries like China and India. As those countries grow richer, they’re developing their own financial sectors, which could add a further $300 trillion by 2020. Bain & Company believes that the sheer, mind-blowing size of these numbers mean that “capital superabundance” will be the single biggest influence on our global economy for decades to come.

Most investors grew up in a world where capital was hard to come by. But now it was everywhere. And more of it was appearing all the time. This created a problem for investors. There was so much capital they didn’t know where to invest it. So they began looking for new opportunities — anything that could provide a quick financial return. 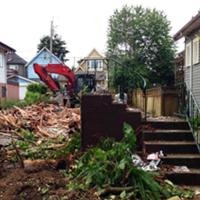 Among those new investments was real estate. It had always been a local industry. The people who buy and sell a city’s buildings tended to live in those cities. But that quickly changed. “The amount of global capital currently earmarked for real estate investment is extraordinary,” industry trackers such as EY, formerly known as Ernst & Young, began observing.

The surge was felt most dramatically in the world’s “gateway cities.” These are the global hubs of commerce and culture. They’re the large, stable, cosmopolitan cities where investors from all over the planet can feel secure putting their money. They include New York, San Francisco, Sydney, Singapore and London — and, to a lesser degree, Vancouver.

The effect of global capital pouring into them was predictable. Real estate prices accelerated to “near record levels,” a PwC report from last year observed. And home ownership for regular people went further out of reach.

Few cities have experienced this more dramatically than Vancouver. Like many gateway cities, Vancouver is growing fast. Young people and aging Baby Boomers — known to the real estate industry as “empty nesters” — are pushing into the urban core. The physical limits of ocean and mountains make new development harder.

Housing has always been expensive here. But a surge of global capital, much of it from China, was like gas on a fire. Unaffordability is up 123 per cent since 2004. It puts Vancouver in the same category as cities like London, where “global capital superabundance” has helped cause “skyrocketing home prices,” Bain & Company observed.

But not everyone agrees with the assessment. The slowdown in Vancouver’s home sales likely has as much to do with new rules in China making it harder to move capital out of the country as Clark’s tax.

Prices will need to fall dramatically lower before owning a home is feasible for the average person. In the meantime, the think tank Demographia has ranked Vancouver as the third least affordable city in the world. Coldwell Banker realtor Tina Mak is among those who think the levy on foreigners is unlikely to change that. “Such a tax won’t reduce the Asian thirst for an investment beachhead abroad,” she wrote. “Vancouver will be a preferred destination for foreign investors for many years to come.”

Especially if global capital continues to accelerate at the astounding rate identified by Bain & Company: tripling to $600 trillion from the 1990s to 2010, with a further rise of $300 trillion within the next few years. “As expected,” the firm’s Harris explained, “we’ve seen that capital grow and it’s coming from the places we anticipated.” Like China, for instance, which has added two-thirds of this global capital growth.

So long as these trends continue, there will be enormous pressure for investors to find new investment opportunities. They’ll become more and more desperate for quick financial returns. And if past years are any indication, they will continue to seek those returns in real estate — whether in Vancouver, Toronto or any other of the world’s gateway cities.

We can blame artists, hip cafes, developers and foreign buyers all we want for pricing us out of our cities. They all have a role to play. But we also have to understand that unaffordability is now being driven by our global financial system. And it will take more than a tax in Vancouver to change that.