"A foreign ownership tax of 10 per cent on a $5-million home will not stop a sale or create any affordability." -- Bob Rennie, real estate magnate, BC Liberal fundraiser. 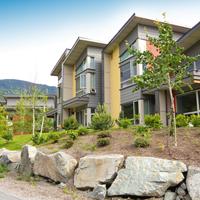 Is One of These the Answer to Vancouver's Affordable Housing Woes?

Bob Rennie is right. That's why the first step toward solving Metro Vancouver's high-priced housing problem is simple -- though probably even more unwelcome to Rennie.

The government needs to ban all new foreign home ownership in British Columbia for six months.

A six-month ban would give us time to start finding longer term solutions and send a signal to the world that Metro Vancouver is not for sale to the highest bidder as a blue chip investment. It's our home and people with no commitment to B.C. have no business buying residential property purely for speculation.

Even the Bank of Canada is concerned, saying foreign demand "does contribute to price increases that are driving the rise in household indebtedness."

And the Bank of Nova Scotia is restricting mortgage lending here because, its CEO Brian Porter says, "We're a little concerned about housing prices in the greater Vancouver area."

The Liberals could recall the legislature and pass an act suspending the purchase of residential property by foreign buyers for six months to stop the insane price escalation and the wild speculation fuelled by wealthy investors who have no plans to live here or make a contribution to our province.

During that six months, the province could work with the federal and municipal governments, realtors, developers, contractors, housing experts -- and most of all citizens -- to gather data and formulate a long-term strategy to reduce ridiculous price increases that are driving people into despair and out of their unaffordable city.

There are lots of good ideas being discussed -- lower property taxes for local workers and higher taxes on vacant homes, a speculation tax, more co-op housing, higher density incentives and many more.

And Josh Gordon, a Simon Fraser University professor of public policy, says that contrary to Rennie's view that lack of housing supply is the problem, record prices are being driven ever higher by surging demand from foreign buyers. And, says Gordon, there are solutions readily available to government.

"The policy levers to curtail foreign investment exist, should we wish to use them. Properly implemented, they will address the root cause of the recent price surges without setting us up for an even worse price correction. It is simply a matter of political will," Gordon argues in a Globe and Mail column.

But the B.C. government won't impose a temporary foreign ownership ban or do anything substantial. It has turned a blind eye to the problem for more than a decade and even now is only proposing measures that are meaningless, ineffective window dressing.

The reasons for the BC Liberals inaction are obvious. First, the provincial Property Transfer Tax revenue of $1.1 billion helps balance their budget. (It's forecast to bring in nine times as much as the $128 million in natural gas royalties' revenue expected this fiscal year.)

And second, developers and the real estate industry that dine out on foreign investors' mad money contributed $12 million of the $70 million in donations the BC Liberals received between 2005 and 2015 -- more than any other sector, including mining and forestry.

That's a whole lot of BC Liberal love from those who build and sell housing.

And who is Premier Christy Clark's chief fundraiser and confidante?

Rennie, the condo king who adamantly opposes restricting foreign sales. Rennie Marketing Systems gave the BC Liberals over $329,000 during that period.

"China buys $6 billion a year in British Columbia exports. Are we going to tamper with those jobs and our economy?" Rennie told an Urban Development Institute audience this month.

So exports of resources and imports of Chinese produced goods is dependent on letting foreign speculators buy residential land? Preposterous.

"The city of Vancouver should get out of the affordable ownership business," Rennie added.

And so long as Clark listens to Rennie there won't be any action.

But with a new Insights West poll showing 80 per cent of British Columbians would support a tax on absentee owners, it's clear the public wants action, not more pontificating from those who profit from out of control prices.

"The level of animosity towards the provincial government is high," says Insights West vice-president Mario Canseco.

How bad have Vancouver housing prices gotten? Vancouver mathematician Jens von Bergmann calculates that soaring prices have brought gains to homeowners equivalent to working at a $126-an-hour job. (The average wage is $26 an hour.)

"It's another reminder of how disconnected the real estate is from the local market and I think it's kind of a turning point where we have to ask ourselves, 'How can we adapt our tax and regulations system to deal with these new realities?'" said von Bergmann.

We can adapt. And after the six-month freeze on foreign home purchases, B.C. could restrict outside ownership in the way that many other countries like Australia, England, Switzerland, Mexico -- and yes, China -- now do.

But first we have to overcome the Rennie rhetoric that informs Clark's policies.

"If you have a 'no tower' sign on your front lawn," Rennie says, referring to a neighbourhood group opposing a 12-storey tower near Commercial Drive, "then you have no right to talk to your children about affordability."

Really? How about -- "You have no right to talk about housing affordability if you are selling out the province to foreign buyers while driving prices beyond the reach of ordinary British Columbians?"

But Rennie's comments are a symptom of the problem, and definitely not a solution.

The first step -- just like with a life-threatening injury -- is to stop the bleeding with a six-month ban on foreign home buying.

But until the BC Liberals realize that skyrocketing housing prices are threatening our way of life, there will only be more casualties.