Is Canadian medicare being terminally damaged by federal funding cuts? And if so, will the damage be a decisive issue in the next election? Healthcare advocates think it should. 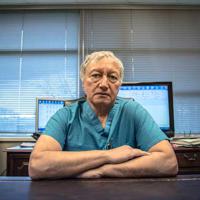 "Whether it's our overflowing emergency wards, our short-staffed long term care homes, or hospitals that are forced to accommodate patients in the hallway, it's clear that our public health system simply cannot withstand any more cutbacks," the Hospital Employee Union's Bonnie Pearson told a crowd of labour and health policy advocates rallying outside Vancouver General Hospital last month.

The advocates are aiming get voters to care about what they describe as an ongoing crisis in Canadian medicare, and make it a key issue in the federal vote this fall.

The hospital rally marked the first anniversary of a cost-cutting decision made last year by the Harper government, which unilaterally changed the Health Accord, the healthcare funding formula that has governed federal transfer payments to the provinces for a decade.

Under the original accord, transfer payments increased each year by six per cent. Now, annual increases will be tied to economic growth plus three per cent. Pearson suggested the change will cut $36 billion from healthcare funding over the first decade it is in effect.

Former Saskatchewan premier Roy Romanow, whose 2002 Royal Commission on the Future of Health Care inspired the Health Accord, called the change "an attack on Medicare."

But there are other ways that the Harper government has attacked Canadian health care that should be front and centre this election.

Contributions on the decline

When Canadian medicare first began, the federal government covered 50 per cent of health costs. Over the years, the federal contribution has gradually decreased to about 20 per cent, and some experts predict it will fall to 12 per cent within 25 years under the new funding formula.

Meanwhile, the Harper government, acting on its long-term agenda of tax and service cuts, has brought the ratio between GDP and taxes to its lowest level in 70 years. The Canadian economy is more lightly taxed now than it has been in over half a century.

Other ways that the Harper government has attacked Canadian health care, according to Jenn Kuhl, who speaks for the BC Health Coalition, include drastic cuts to health care coverage for refugees, a failure to produce a comprehensive pharmacare system that would reduce drug costs, and the neglect of a national strategy to deal with predictably increasing healthcare needs as the baby boomers age and decline.

The federal government has also announced it will no longer fund the Health Council of Canada, a research and evaluation body that has provided important data on how the national health care system is working.

The solutions for ailing Canadian health care often touted by pro-business think thanks -- two-tiered medicine in the form of for-profit clinics, and increased use of private, for-profit health insurance -- would more likely divert doctors from the public system to the for-profit system, resulting in the cherry-picking of easy cases and patients for admission to corporate clinics. It would also, arguably, erode public support for public funding and delivery of health care services.

Don't let it get drowned out

Of course, the Harper Conservatives aren't the only villains in the healthcare tragedy. The BC Liberals have been guilty of egregious attacks on health care workers and on medicare in the province as well, but that is a subject for another column.

Canadians who care about protecting publicly funded health service delivery need to focus on insisting that a full and informed debate about the future of medicare be part of the lead up to the federal election.

Several factors may work to crowd healthcare issues off the campaign agenda. By fall, Canada may be even more deeply involved in Harper's military adventures in Syria and Iraq than we are now. Debate about this ill-advised crusade may well dominate election debates, and that would be a good thing.

Less productively, the chorus of right-wing propaganda that insists the only important issues are lowering taxes and shrinking government will continue to resound in the mainstream media, and voters may be so distracted by that clamour that health care will fail to get the attention it deserves.

Let's hope we succeed in electing a government that wants to protect and extend the progress on health care that we have made in this country since the passage of the Canada Health Act in 1984.