The dramatic slump in global oil prices has, as usual, caught governments, industry and markets off guard. In fact, Brent oil prices, a global standard, have dropped by 25 per cent since last June. 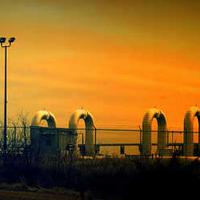 Given the chaos in Iraq, Syria, Libya and the Ukraine -- Russia is a major oil exporter -- some analysts would have predicted rising prices.

But that's not what's happening for a constellation of reasons.

As a consequence, falling prices are telling us something about changing oil markets, the stagnating state of the global economy, and the poor quality of extreme hydrocarbons.

The price drop may also be signalling a new angst among global investors due to an enlivened climate change fight and the adoption of the Keystone Principle by community groups across the world.

The principle states that the simplest thing society can do to avert climate disaster is to stop investing in costly oil and gas infrastructure that lock-in dangerous fossil fuel emissions for decades.

The principle partly accounts for sustained and growing opposition to the oilsands, new oil pipelines, hydraulic fracturing, shale gas and liquefied natural gas projects around the world. It also drives the campaign to get institutions and pension funds to jettison their investments in Big Oil.

Meanwhile, the price collapse, if it lasts, could also have dramatic implications for the oilsands and LNG projects as well as the opportunity for political change in petrostates.

Ever since 2008, the consumer appetite for oil in Europe, Japan and North America has lessened or stagnated due to rising energy prices, more efficient vehicles and the global recession.

But China is no longer growing like crazy. The world's second largest consumer of oil after the United States is slowing down, and for the first time in 15 years will not meet its official growth targets. The country's chaotic and highly destructive industrial growth, a copycat of the worst excesses of the U.S. experience, may have peaked altogether.

At the same time the world has become more dependent on dirty and costly hydrocarbons such as bitumen, shale oil, shale gas, natural gas liquids and biofuels. The U.S. devotes 40 per cent of its corn crop to ethanol production.

These fuels not only cost more to extract but offer less energy and value in return. It takes 1.2 barrels of bitumen, for example, to equal a barrel of oil. In addition, fracked shale oil also suffers notoriously rapid depletion rates and commits companies to a treadmill of spending just to keep production flat.

Oil economist James Hamilton has also pointed out that natural gas doesn't have anywhere near the economic or energy value of oil. In fact, the market pays four times as much to buy a British Thermal Unit of oil compared to natural gas.

"An energy-producing company that reports its natural gas production on a barrel of oil equivalent basis is clearly doing a disservice to shareholders who care about how profitable the company actually is," wrote Hamilton in a recent essay titled The Changing Face of World Oil Markets.

The extraction of these costly hydrocarbons combined with the relentless depletion of conventional oil explains why oil prices have doubled since 2005.

An economy gummed up by tough oil

But the global economy's growing dependence on extreme and lower quality hydrocarbons has taken a huge financial toll on oil and gas companies, which have reported record debt levels and cash flow problems in recent years.

A recent report by Kepler Cheuvreux, a prominent European firm, highlighted the significance of extracting high cost and lower quality oil: "This means that the increase in energy provided by all petroleum liquids and biofuels over the period 2000-13 is in fact 16 per cent lower than might be inferred from a simplistic reading of the volumetric increase in the production of liquids."

Meanwhile, the price drop has implications for the world's riskiest and most expensive oil: bitumen. According to the Paris-based International Energy Agency, one-quarter of all bitumen mining projects lose money when oil drops below $80 a barrel.

In the last year Shell, Statoil and Total have all cancelled multi-billion-dollar projects in the oilsands due to concerns about the fragile economics of bitumen as well as a softening in global demand for oil.

Goldman Sachs now estimates that more than half of the oil companies listed on the stock market are spending five times more than what they did in 2000 chasing extreme hydrocarbons. As a consequence, they need an oil price of $120 a barrel to remain cash neutral in the future.

Saudi Arabia, the world's top oil producer, plays a major role in the ongoing drama of changing oil markets, too. In the past it has lowered production when oil prices tanked. But not this go-around. The savvy Saudis appreciate that low prices can severely hurt their higher cost competitors in Iran, Iraq and Russia along with Canada's extreme bitumen miners and costly U.S. shale oil producers. With lots of cheap oil reserves and cash in the bank, the sheiks can ride out low prices to maintain market share, particularly in Asia.

Low oil prices should also be sending shudders through the government of British Columbia. The price for LNG is directly linked to oil prices, the world's most volatile commodity. LNG may look like a good idea when high oil prices exceed $100, but such complex gambles quickly become a terrible adventure when oil prices drop below $80.

Fereidun Fesharaki, chairman of Facts Global Energy, an industry consultant, told Bloomberg last week that weaker oil prices may put many LNG projects "to sleep for a number of years." Low oil prices could stall expansion of the industry in Australia and challenge the economics of seven existing projects.

A fall in oil prices also has implications for political change in oil-exporting nations.

Petrostates often support extended one party rule due to the power of oil revenues to contaminate the political process. But falling oil prices reveal the vulnerabilities and incompetence of petrostates.

Political scientist Terry Lynn Karl, an expert on the dysfunction of petrostates, notes: "Virtually all oil-rich states tend to face significantly higher levels of social protest when oil revenues fall, and some of these regimes collapse."

As such, a drop in prices can often spur Arab Spring-like opportunities for change.

Last but not least, a weakening of oil prices may be signal a growing wariness among investors about the profitability of high cost hydrocarbons and their accompanying carbon liabilities given renewed concerns about climate change.

In particular, investors are getting particularly anxious about the negative cash flow of many firms fracking tight oil or shale gas formations in North America, as well as the declining capital productivity of Big Oil.

Kepler Cheuvreux recently reported that the long-term energy returns on renewables such as solar, onshore wind and offshore wind are now much better than those offered by extreme oil.

Renewables yield "more net energy annually over 20 years than oil" at both US$100 per barrel and US$125 per barrel.

The report concluded that these energy yield numbers for renewables "should terrify the oil majors" given the debt they have accumulated by over-investing in extreme and risky hydrocarbons such as bitumen.

Given the rapid depletion of conventional oil supplies and the volatile nature of the commodity, no one expects the drop in oil prices to last for too long.

But energy predictions are notoriously fickle. Perhaps the best ordinary people can expect is simply more volatility and unpredictability.

Business as usual is over.