"I'm not a former Liberal. I'm a Liberal. And I'm a Liberal senator. I think not a lot will change." -- Senator James Cowan, "ex-Liberal" Senate leader, Jan. 29 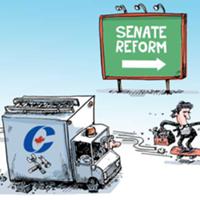 Three Paths to a Non-Partisan Senate

Yet moments later the coin is miraculously back, and right in the palm of his hand.

Liberal senators will be no different.

While many media and academic observers have been impressed with the tactic's "boldness" or its "simplicity" -- including now ex-Liberal Senator Jim Munson's hyperbolic claim Trudeau had "set" his senators "free" from supposed $135,000 a year serfdom -- the reality is far less noble.

Already it's clear that the "free" Liberals are demonstrating their "independence" by continuing to have James Cowan as their Senate leader and Munson as opposition whip.

Trudeau claims that "there are no more Liberal senators" despite most of the 32 he ejected continuing to call themselves Liberals, work together as Liberals and pledge to support the Liberal cause.

(Perhaps the "senators formerly known as Liberal" will follow the lead of rock star Prince when he temporarily dropped his name and replaced it with a stylized symbol? A giant red letter L could identify the "free" Grits.)

Trudeau reasoned that now the former Liberal senators could be "independent" from the party that appointed them and even challenged Prime Minister Stephen Harper to do the same.

"Join us in making senators independent of political parties and end partisanship in the Senate," Trudeau said.

But in an ironic twist, it was in fact Conservative senators who demonstrated in 2013 what true independence means, when 16 of them voted to radically amend Bill C-377, a Conservative private members bill passed by Tory Members of Parliament but sent back "gutted," in the words of its sponsor, South Surrey-White Rock-Cloverdale MP Russ Hiebert.

C-377 was vigorously opposed by Canadian labour, including -- full disclosure -- unions that are among my clients, but it was then-Conservative Senator Hugh Segal who led a successful insurrection against the legislation.

The point isn't the content of C-377, but that 16 Conservative senators stood up in public to thwart Harper and his cabinet and show their displeasure.

Now that's independence! And it was demonstrated by challenging a far more powerful opponent -- the prime minister -- than the leader of Parliament's third party.

And when he had an earlier chance, Trudeau voted against an NDP resolution in the House of Commons on Oct. 23 that called on senators to be made independent.

It was left last week to B.C. senator and recent ex-Liberal Larry Campbell to bring his forensic skills as Vancouver's former coroner and start the post-mortem on Trudeau's tactic.

"I think it's a brave move on the part of Justin. I don't know that it’s a smart move," Campbell said.

When it comes to tricks, sometimes the magic just wears off.