Ye Gods and Little Fishes! Yahoo and Scooby Dooby Doo! Ten days ago the political columnists from the Sun and the Province each did articles on pipelines and tanker traffic. 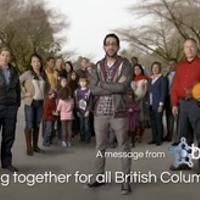 Now these weren't exactly groundbreaking cutting-edge political opinions. The story was: "British Columbia is not prepared for a large coastal oil spill and the spill prevention and response system needs a major upgrade, especially before any new oil pipelines are approved."

"That will be the bottom line in a new report on the province's oil-spill system released (after it was leaked and no other choice was available) by the Christy Clark government."

This is, however, a rare mention of pipelines and tanker traffic by Mr. Palmer and Mr. Smyth.

Indeed, I believe this marks the first time I've read in the Postmedia press anything faintly critical of the energy policies of the Campbell/Clark government since it took office in 2001. If readers can point me to any other such references I have missed I would be grateful to receive them.

Be it incursions into the Agricultural Land Reserve, fish farms, private power development, pipelines or tanker traffic -- I can't remember a sustained critique from the columnists or the editorial voices of the two papers.

These columnists are experienced, talented writers who showed a commendable ability to hold the NDP's feet to the fire in their best decade, but have been struck dumb, in my opinion, since 2001.

I don't know what goes on inside the walls of those two newspapers.

I will, however, relate a bit of my own experience.

When I had a steady job hosting British Columbia's most listened to news talk show at CKNW I also wrote for certain outlets.

One was the paper owned by David Black. Until I was fired. The cause? Near as I could tell, it was my opposition to fish farms.

I quit a column in the Province because their owners, then Canwest, had spiked a column by Gordon Gibson that criticized the firing of the editor of the Ottawa Citizen. But, again, my main job as radio talk show host was not threatened. Which made me very lucky indeed.

An outstanding example of the freedom CKNW gave me happened in 1989 when I was highly critical of then Premier Bill Vander Zalm. The outcry from the "Zalmoids" was enormous, and manager Ron Bremner was inundated with calls.

One day a delegation of northwest salespeople came to "Brem" and told him that if he didn't shut Rafe up, they couldn't sell advertising. He replied, "If you can't sell time with the numbers Rafe gets, you should seek other employment." He then sent a memo to all bulletin boards saying in essence that CKNW's stock-in-trade was "free speech." It would have made the famous American advocate of free speech Thomas Paine blush with pride. As long as Frank Griffiths (always Mr. Griffiths) owned CKNW, broadcasters would be supported.

We did have one constraint. If we were reckless, we were on our own. But with that clause, I was backed up by the station in several potential and real lawsuits, one of which went to the Supreme Court of Canada, where the ruling went for our side and the existing laws of libel were changed.

I tell you all this because never did I feel the slightest need to self-censor. If I was uncomfortable with an editorial, I had Dan Burnett, perhaps the best libel lawyer in Canada, at the other end of the phone anytime I needed him. Dan also acts for Postmedia.

Seek and ye shall find

What about The Tyee? I've been writing for them and editor David Beers for nearly eight years. I have indeed heard from him on questions of fact, syntax, grammar, accuracy and potential libel, and I fully expect that. I have not ever had the slightest criticism on content. Never.

None of what I've said is in any way intended to toot-my-own-horn, and if you don't come away from this piece thinking how lucky I've been, you've completely missed my point.

The consequences of Postmedia's bias have been serious. The environmental questions I raised earlier are immensely important. The large corporations have depleted our agricultural land, pillaged our salmon, ruined our rivers and got us to the point where, if no drastic action is taken, we will have environmental disasters like pipelines and tankers.

You, the public, have been cheated of the truth by what to all appearances has been a media that is eager to relay and reflect the views of the conservative, pro-corporate Fraser Institute.

These are tough times for the print media. Revenues have plummeted, meaning advertisers must be coddled and cossetted, which turns news and opinions into "infomercials."

In 1775 the same thing applied to the Thirteen Colonies. Thomas Paine came on the scene and started publishing pamphlets like Common Sense which sold like hotcakes.

The Tyee and another website in which I'm involved, the Common Sense Canadian, play the same role. But while they lead governments and corporations to have fits, they must do more than hold the so-called establishment's feet to the fire.

The difficulty faced by bloggers and others who present their journalism exclusively online is that they're hard to find. Unlike in the 18th century, most people don't want to work at just getting the news. Just as in the world of the blind, the one-eyed man is king. Whatever is easily available trumps the harder to get.

Maybe Tom Paine today would be swallowed by the free "newspapers" on virtually every corner. Perhaps too many people are without a sense of what they are missing because of the shallow media they encounter for free wherever they happen to be. "The wheel may be crooked, but it's the only wheel in town."

What is certain is that if one wishes to be informed, one must be skeptical of what is too easily available, and know where to go on the Internet to find the hard truths.