My best guess it that the Fraser Institute expects no one to read the report behind their newest sensationalist press release, in which they claim that the cost of immigrants to Canada is staggeringly high. 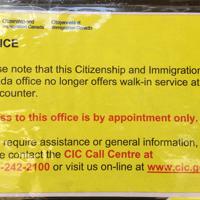 Anyone who looked at the report more closely would find false claims, deliberately misleading arguments, a naive understanding of global migration trends, and evident ignorance of what informs Canada's immigration priorities. The report is so poor and illogical that it cannot be taken seriously as contributing to public debates about policy reform in the domain of immigration.

The report bases its conclusions on a study of recent immigrants to Canada between 1986-2004, whose average incomes and thus contributions to the Canadian tax base are allegedly lower than non-immigrant Canadians. The report claims that each immigrant presents an average net drain of $6,329 per year, and thus if we multiply this number by the 4.2 million immigrants in the country who arrived between 1987 and 2010, the annual "cost" to Canadians is $26 billion.

What can we learn from this supposed swindle? Nearly nothing, it turns out. Not only are the numbers exaggerated and then applied dubiously, but the "solutions" proposed would be actively harmful, both to immigrants and to Canada more broadly.

Let's begin with the estimated cost of immigrants. For one thing, immigrants to Canada are on average younger at admission than average Canadians, so any analysis of the taxes immigrants contribute must control for age. Knowing only that the average age of incomers is lower than the average age of Canadian workers, we should expect immigrants to make less money (and therefore to contribute less to the shared tax base) -- in the same way that we would expect a 25 year-old to make less, and so contribute less in tax dollars, than does the average 50 year-old. Applying the logic deployed in the report, we should lobby to exchange our 25 year-old-Canadians for more (on average better paid) 50 year-old-Canadians. Maybe the U.S. is interested in trading with us?

Even if immigrants pay less in taxes than average Canadians (because their incomes are lower), that does not tell us that immigrants are drains on the public system. In order to know that, we must also know whether immigrants withdraw in excess of what they contribute from the public services to which they are entitled. Perhaps the authors believe they have evidence indicating that immigrants are net takers (if so, it does not appear in the report), but the wealth of evidence suggests otherwise: immigrants are less likely than native-Canadians to use employment insurance, subsidized housing, social assistance, and so on.

So, we cannot take the report's exaggerated costs of migration seriously. But what should we make of its two principal policy proposals: 1) that we should reduce the number of admitted dependents and 2) that we should abandon the points system for an employer-directed selection system where economic migrants have secured employment before they enter Canada?

The report claims that admitted dependents are mainly parents and grandparents, those with limited working years and large medical costs ahead of them. It also claims that in 2011 over 50,000 of this type of immigrants entered Canada, a claim that is false. The actual number is 14,000. The Institute's number represents the full number of immigrants admitted as dependents, which includes spouses and children. Much of the Fraser Institute's case rests on this erroneous number since the burden imposed by parents and grandparents is said to make up a significant portion of the undue tax burden shouldered by Canadians.

The report offers other misleading comparisons too. It implies that, since the average age of parent and grandparent entrants is 65, we should expect their health care costs to mimic those of Canadians aged over 65. It suggests that they will rely heavily and unduly on the healthcare system. What it fails to mention is that under our current system the health care costs of parents and grandparent entrants are already to a considerable extent borne by the sponsor, not the tax payer, for 10 years after arrival. In other words, "Canadians" do not become fully responsible for them until they are 75 years old.*

The burden of dependents is therefore much smaller than the report alleges. Refusing to provide medical care to 75-year olds who have lived here for at least 10 years will save Canadians very little, whereas the human cost of denying the right to family reunification is unconscionably high.

Should Canada abandon the points system, though, as the report proposes, in favour of a system in which economic migrants are admitted if and only if they are in possession of an employment contract? In making this proposal, the authors display an appallingly naive faith in the ability of employers to select immigrants in service of the Canadian public good.

Any fair-minded evaluation of temporary labour migration programs in Canada -- which are explicitly intended to favour the employers' stated economic interests -- illustrates how employers have an interest in suppressing wages to the detriment of the Canadian public. Employers have shown themselves willing to exploit workers, even where the oversight and sanctioning mechanisms the report proposes already exist. Temporary labour migrants are subjected to lower wages and often forced to labour in unsafe and unsanitary conditions, all of which enables the displacement of Canadian workers. Clearly, there are significant risks to leaving the selection of immigrants to employers.

The false and misleading claims, alongside the naiveté of the report, should be enough to discredit its conclusions. But the twin premises of the report itself are themselves objectionable: first, that the near exclusive objective of any immigration regime is to produce economic benefits to the receiving state, and second, therefore, that immigrants should thus be evaluated solely in terms of the economic benefits they produce.

Certainly, we should not deny that the economic benefits provided by immigrants to Canadians are among the considerations that are relevant in developing a full immigration policy. But immigrants are more than essential contributors to an economy that would otherwise suffer from near zero population growth, they are also an integral component of this country's vibrant cultural fabric. The Fraser Institute's limited focus on economic considerations betrays a failure to appreciate the wide-ranging, non-monetary, contributions made by Canadian immigrants, and displays a narrow conception of what immigration policy in an enlightened, compassionate Canada should be.

*Clarification: The tax payer does pay for basic health care for parents and grandparent entrants.